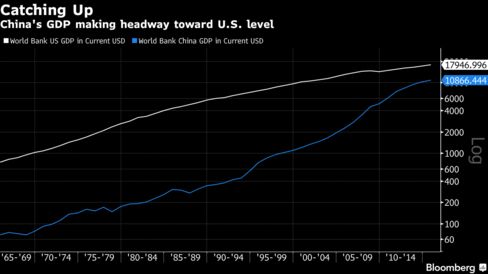 U.S. President-elect Donald Trump will confront a Chinese economy that is vastly bigger and more mature but less of a growth motor than the one faced by the last Republican administration. Its also dealing with a host of new challenges.

Once driven by exports and investment, Chinas growth model has shifted to depend more heavily on consumer spending and services. The government irked America for years by holding down its currency even as capital flooded in, and now its trying to cushion the yuans decline as capital flees. Gross domestic product has more than doubled over the past eight years, yet its now expanding at the slowest pace since 1990 and debt has reached levels some economists find alarming.

The challenges will factor into the Trump administrations efforts to reshape the relationship with the worlds second-largest economy, following pledges on the campaign trail to fight what he calls unfair trade practices and declare China a currency manipulator. Yet Chinas growing economic clout will probably make it a more formidable adversary than it would have been eight years ago.

China has become a larger, more powerful and a more influential economy, said Eswar Prasad, a former chief of the International Monetary Funds China division and now a professor at Cornell University in Ithaca, New York. The notion of the U.S. being able to damage Chinese interests is not that viable a threat anymore.

The Asian nation in 2010 surpassed Japans economy as No. 2 even as its expansion moderated and debt ballooned. GDP growth is seen slowing to a rate of 3 percent to 6.5 percent in 2021, at best less than half the pace in 2007, when its double-digit expansion was fueled by a mix of cheap, low-end manufacturing that was designed for export and massive borrowing by local governments to fund infrastructure spending.

Chinas multi-year growth sprint came at a cost. Total debt surged 465 percent over the past decade, according to Bloomberg Intelligence. Corporate debt jumped to 165 percent of GDP from 105 percent. The IMF has flagged Chinas increasing debt pile as a possible threat to the banking system and global growth.

How China manages the yuan will be among the most pressing economic issues facing the incoming Trump administration. A 1.9 percent devaluation last year along with changes to how the yuan is traded caused bonds and stocks to sell off around the world. Investors worried that China was weakening its currency to help exporters.

While those fears have since subsided, they havent gone away. Pressure remains on Chinas capital borders to get money out as the yuan weakens. While the currency is down about 2 percent since the devaluation in August 2015, it has appreciated by more than 20 percent since the nation abolished the dollar peg in 2005.

Read more: Chinas market meddling — a QuickTake on the transformation

Chinese companies and investors are rushing to buy overseas assets at a record pace, forcing authorities to enforce strict rules on getting currency out of the country. Meanwhile the government is spending its international reserves — down more than $800 billion since mid-2014 — to prop up the yuan. Capital flowed out of the nation to the tune of $970 billion in the 12 months through October.

Thats all in stark contrast with a decade earlier when Chinas authorities were grappling with surging inflows and were trying to contain the yuans upward trajectory. Back then, U.S. officials were among those encouraging China to let the currency appreciate to rein in a ballooning current-account surplus.

Trumps comments about the yuan on the campaign trail reveal a dated outlook on the currency. Calling China a manipulator, grand-master level, in September he talked of applying tariffs if the nation devalues its currency to gain an unfair advantage over the United States. Export data shows little evidence that the softening currency is doing much good for Chinas manufacturing sector.

With the current-account surplus lower and China now focused on supporting the yuan rather than keeping it weak, attention will turn to Chinas current major imbalance — the debt buildup, according to Tom Orlik, chief Asia economist for Bloomberg Intelligence in Beijing.

A rapid unwinding of Chinas domestic imbalances, though it is not the central scenario for the years ahead, would risk a global shock rivaling the 2008 financial crisis, Orlik said. Smaller disruptions, along the lines of 2015s equity market boom and bust, will continue to send ripples across the Pacific.

Even with Chinas challenges, the nation likely wont hesitate to fight any potential moves from Trump, such as new tariffs or accusations about its currency.

If a trade showdown happens, China is likely to go tit for tat with Trump, said Andrew Polk, Beijing-based head of China research at Medley Global Advisors, which advises hedge funds and other institutional investors. I expect the Chinese to be more reactive than proactive on this front.