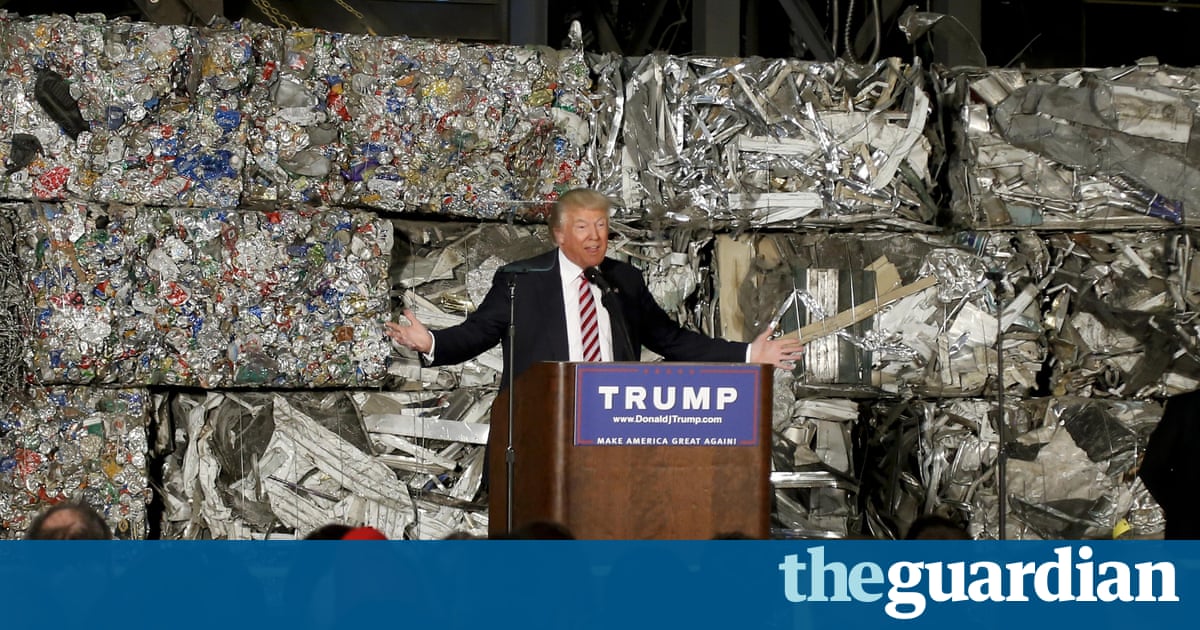 Donald Trump raged against globalization and free-trade agreements on Tuesday and urged the US to declare economic independence again.

At a scrap metal facility south of Pittsburgh, the presumptive Republican nominee veered yet again from conservative free-market orthodoxy as he called for the US to withdraw from free-trade deals, including Nafta, the trade agreement with Canada and Mexico. Trump said of the USs two neighbors: They are so used to having their own way. Not with Trump they are not having their own way.

He also promised to take actions many economists believe would start a trade war with China, including introducing retaliatory tariffs, bringing trade cases against the country in the World Trade Organization and labeling China a currency manipulator.

We already have a trade war and were losing badly, he said.

Trump argued that his policies would lead to a restoration of manufacturing in the US. The loss of industrial jobs was not some natural disaster, it is politician-made disaster, he said, adding: It is the consequence of a leadership class that worships globalism over Americanism … Our politicians took away from the people their means of making a living and supporting their families.

Trump, whose campaign has long warned against the false song of globalism, criticized growing world economic interdependency that he argued hurt American workers. Our politicians have aggressively pursued a policy of globalization moving our jobs, our wealth and our factories to Mexico and overseas, said Trump. Globalization has made the financial elite who donate to politicians very wealthy. But it has left millions of our workers with nothing but poverty and heartache.

In contrast, Trump said he would bring back millions of jobs. He made clear that this was something only he could deliver and warned that foreign countries would again take advantage of the US after he left office. After me, theyll probably start doing it again, he said. But we will have four or maybe eight great, great years.

In contrast, Trump derided his likely Democratic opponent, Hillary Clinton, and her friends in global finance who want to scare America into thinking small. Instead, he would make things better by pulling out of free-trade agreements, he said, specifically holding Bill and Hillary Clinton jointly responsible for Nafta and Chinas entry into the WTO during the 1990s.

Trump also railed against Clinton for her previous support of the Trans Pacific Partnership, or TPP, the 2015 free-trade agreement between the US, Japan and 10 other countries circling the Pacific Ocean. Although the former secretary of state helped negotiate the deal in office, calling it the gold standard in a 2012 speech, Clinton backtracked on it during her primary challenge from Bernie Sanders. The TPP is supported by both Barack Obama and Paul Ryan, the Republican House speaker, and its implantation was a policy plank in the 2012 Republican platform.

Trump touted the Brexit vote in the United Kingdom last week as an example of the populism he saw fueling his campaign. Our friends in Britain recently voted to take back control of their economy, politics and borders, I was on the right side of that issue with the people while Hillary, as always, stood with the elites, and both she and President Obama predicted that one wrong, he said.

Trumps speech, which included favorable mentions for Sanders, prompted immediate criticism from the US Chamber of Commerce, a longtime GOP ally, which said his policies would lead to the loss of up to 7 million jobs. It marked yet another sign of the many ways in which Trump, who has called for the GOP to become a workers party, diverges from traditional Republican economic orthodoxy.