He went on to mock their polling numbers before saying they had no credibility, Politico reported.

“I guess it’s a publicity stunt,” Trump said. “To be honest, I’m not looking to give them any credibility. They have no credibility.”

The three challengers already face an uphill battle. Over the weekend, Republicans in at least four states — Nevada, South Carolina, Kansas and Arizona — decided to abandon their presidential nomination contests.

“With no legitimate primary challenger and President Trump’s record of results, the decision was made to save South Carolina taxpayers over $1.2 million and forgo an unnecessary primary,” South Carolina GOP Chairman Drew McKissick said in a news release.

In a tweet last week, Weld blasted Trump amid reports the states were going to scrap its primaries and caucuses, saying Trump would rather be “crowned president than elected.”

Trump denied playing a part in the decision by GOP officials.

“The four states that canceled it don’t want to waste their money. If there was a race, they would certainly want to do that, but they are considered to be a laughingstock,” Trump said on Monday, according to Politico. 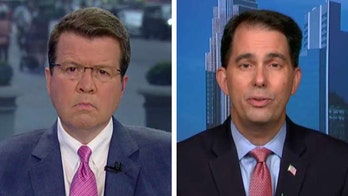