The New Jersey governor, who has launched state initiatives to address opioid and drug abuse, participated in roundtable discussion with president Wednesday 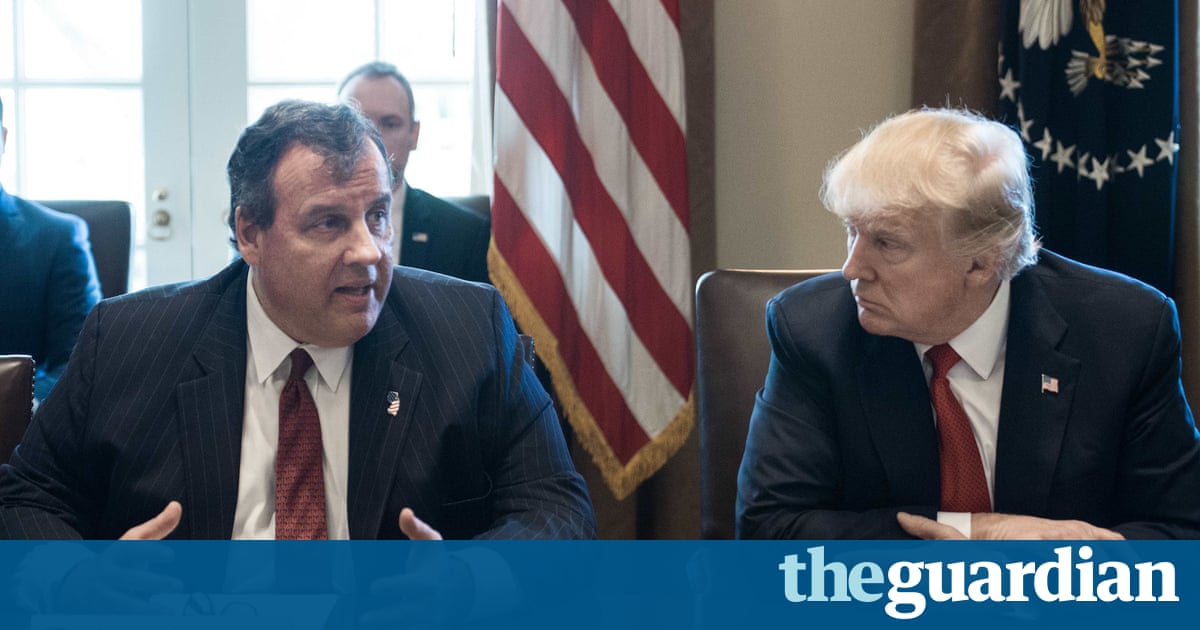 Donald Trump is vowing to step up efforts to combat the nations addiction crisis.

Trump convened a roundtable Wednesday attended by New Jersey governor Chris Christie, members of his cabinet, law enforcement chiefs and recovering addicts. It was the first public event tied to the launch of a new addiction commission that Trump asked Christie, a longtime friend and formal rival, to chair.

Trump listened intently as attendees shared their harrowing stories about addiction and recovery. He told a woman who lost her son to an overdose that he did not die in vain.

Christie, who has made the issue of addiction a centerpiece of his own administration, chaired Trumps presidential transition team before he was unceremoniously replaced by incoming Vice-President Mike Pence.

Christie spoke extensively about the issue during his own presidential bid and has dedicated his final year in office to addressing the drug crisis. Last month, he signed legislation that limits first-time opioid prescriptions to five days worth of drugs and requires state-regulated health insurers to cover at least six months of substance abuse treatment.

Christie told the Associated Press earlier Wednesday that he has no interest in having a permanent role in the Trump administration at this time, but that the president asked him to spearhead efforts to combat opioid and drug abuse as he completes his term as governor.

He asked me to help with this and Im going to, Christie said. Its an issue that I care about a lot in New Jersey and for the country and so the president asked me to do this and I was happy to.

Christie has been friends with Trump for years and has been working behind the scenes with the White House on the issue for months, discussing it with aides including Kellyanne Conway, a fellow New Jersey native, and the president. The commission is being rolled out as part of a new office led by Trumps son-in-law and top adviser Jared Kushner, whose father Christie prosecuted in his former role as US attorney.

Christie, who had lunch with Kushner on Tuesday as part of his discussions about the administrations policy, downplayed reports of tensions between the two.

It was great, Christie said. We are talking about the opioid issue because its one of the things thats going to be overseen out of his department and so we had a good lunch and a good opportunity to lay out what we need to do and what our goals are.

Christies history with drug policy dates to his first elected position in county government more than 20 years ago. The issue became personal more than a decade later, when one of Christies best friends from law school developed an addiction to prescription drugs and died of an overdose in a New Jersey motel.

Christies position leading the commission is a volunteer one, and he has long maintained that he plans to complete his term as governor before moving to the private sector. Nonetheless, people close to him say that he is open to potentially joining the administration once his term ends.

Christies last visit to the White House stoked speculation. After he and his wife, Mary Pat, had lunch with Trump in February, Christie was bombarded with questions at home about his intentions.

Let me be very clear, we did not get into any discussion of me joining the current administration in some type of drug abuse role, some type of czar or God forbid surgeon general, he said then.

The focus on the drug issue also gives Christie a chance to try to move past negative headlines that have helped fuel his unpopularity in New Jersey.

As Christie is appearing at the White House, two former aides are being sentenced for their roles in the 2013 George Washington bridge lane-closing scandal. Bill Baroni was sentenced to two years in prison on Wednesday, and co-defendant Bridget Kelly given 18 months, after they were convicted last November on counts including wire fraud, conspiracy and misusing the bridge for improper purposes.

The scandal derailed Christies presidential aspirations and may have cost him a chance to be then-GOP nominee Trumps running mate a role Christie openly courted. He was later named chair of Trumps transition effort, but was booted after Trump won the election due to internal disagreements about the transitions direction.