They’ve faced threats before: swollen valuations, a stagnating economy, stretches of declining earnings. Now investors are dealing with a new menace, and it’s wreaking more havoc than anything in two years.

It’s the bond market, where the biggest jump for interest rates since March has bulls questioning the staying power of an equity advance now seven months from being the longest ever. So drastic is the runup in yields that it’s knocking stocks down during a period when analysts are pushing up earnings estimates four times faster than any time since 2012. 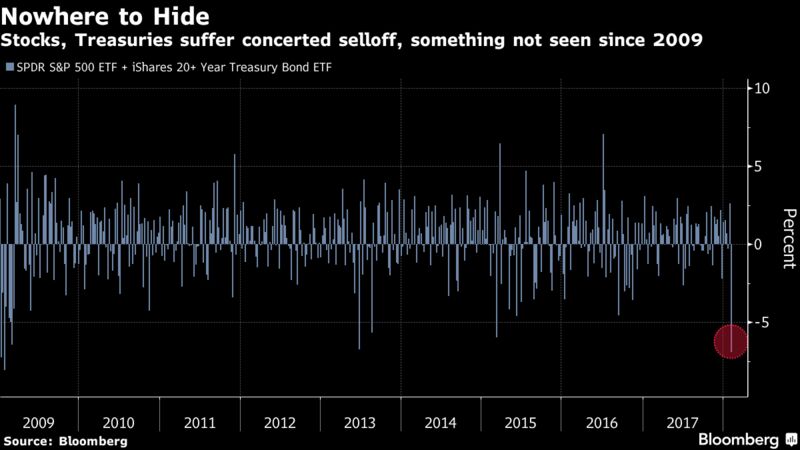 Looking at the week’s drumbeat, you can’t help but wonder, is this the start of something big? Warnings about valuations have been pouring forth from bears for so long that barely anyone listens anymore. With the S&P 500 up almost 50 percent in less than two years, some see the end of the blissfully easy money that equities have spewed out for 13 straight months.

For more on the equity selloff:
Everything’s Expensive in Stocks Now Vulnerable to Lockstep Pain
Signs of Old Age Abound in a Bull Market Closing on History
It’s Getting Hard for S&P 500 to Elude Bond Market Violence
One Indicator Says Bond Rout Going Too Fast for Stocks to Escape

“It’s the turning point of volatility,” said Jeffrey Schulze, chief investment strategist at Clearbridge Investments, which manages $137 billion. “We were all very fortunate to go through a year like 2017. But there’s a number of different dynamics this year that will make volatility more part of the equation than it has been in quite some time.” 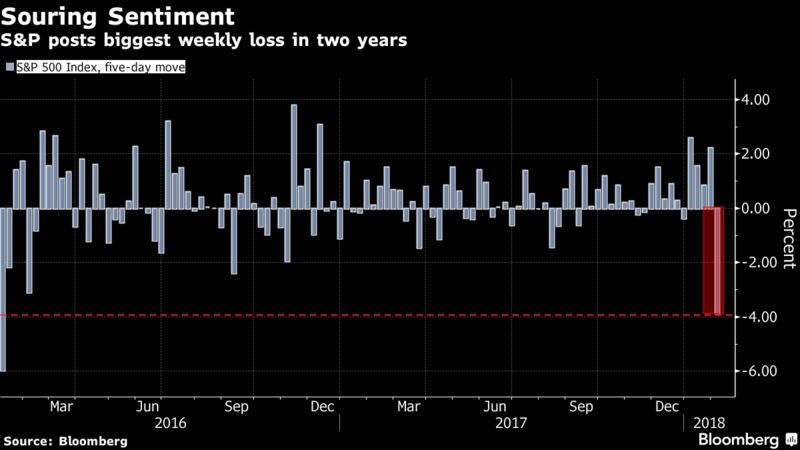 “But it’s definitely not the end of the bull market,” Schulze said. “In order to see the end of the bull market, you need to see the U.S. go into a recession. We have an economic dashboard at Clearbridge, 12 variables that have done a very good job of foreshadowing an economic downturn. Out of the 12 variables, only one of them is flashing any type of caution.”

The most significant feature of this selloff has been its breadth. While past declines in the U.S. stock market have been notable for their narrowness — when one industry fell, another rose — this time there’s been no cushion. All 11 industries in the S&P 500 declined in the last week, something that hasn’t happened since the month of Donald Trump’s election.

Selling has also been spread among asset classes. A simple comparison that adds up percentage losses in the SPDR S&P 500 ETF and iShares 20+ Year Treasury Bond ETF showed a concerted selloff that was the worst since January 2009. 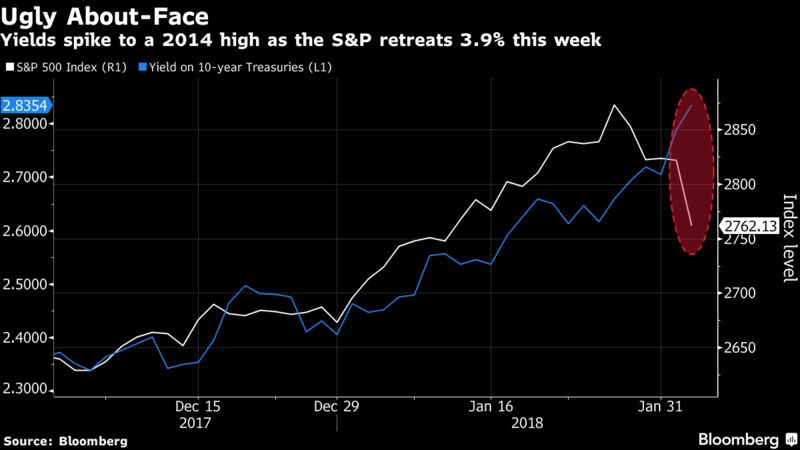 The swoons are taking a toll on one of the most popular asset allocation strategies: those lumped together under the rubric of 60/40 mutual funds. Among 35 such funds that have at least $1 billion in assets, all suffered losses during the week. Their decline averaged 1.2 percent, the most since September 2016, data compiled by Bloomberg show.

A big concern for investors is the timing of the rout — the middle of earnings season, a calendar period that for the last six years has a nearly perfect record of boosting stocks. Bulls hoping for a broader celebration of brisk iPhone X demand at Apple or surging holiday sales Amazon.com were disappointed. Even the seventh straight weekly upgrades to S&P 500 earnings estimates was no help.

To be sure, even a decline such as this week’s is barely notable in a stock chart that goes back more than a few months. The S&P 500 just had its best January since 1997, stocks from Nvidia to Boeing Co. to Vertex Pharmaceuticals all came close to doubling last year, and turbulence as measured by the average level of the VIX was never lower than it was in 2017. Friday’s downdraft came on a day the Labor Department said U.S. employers added 200,000 jobs and unemployment held at a 17-year low. 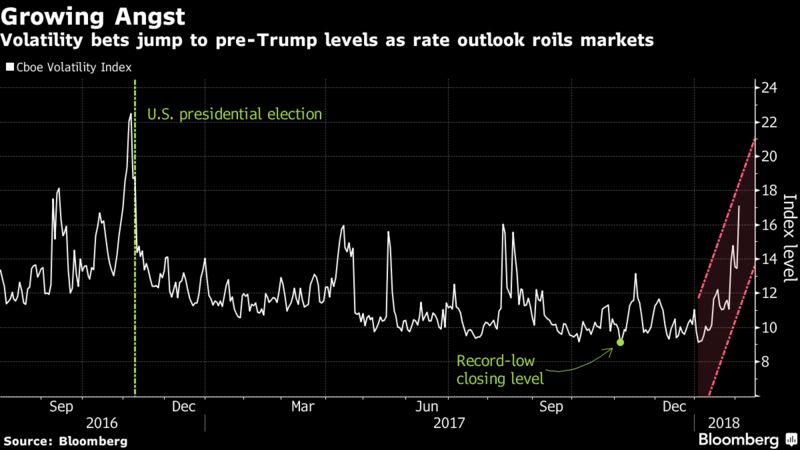 “The underlying strength of the economy is still healthy. The overall level of interest rates is still quite low. If anything, we’re surprised that it took so long for us to get a 3, 5 percent correction in the market,” said Evan Brown, New York-based director of asset allocation on the investment solutions team at UBS Asset Management, which oversees $776 billion. “This is a healthy repricing of bonds and equities, and not a signal of something dire.”

At the same time, a lot that looks straightforwardly good for investors could be framed as bad. Buying stocks when unemployment is this low and consumer confidence this high hasn’t been a great bet: Four of the last five peaks in the S&P 500 came after the jobless rate fell to between 50 and 100 basis points below 4.5 percent, data compiled by Credit Suisse Group AG show.

The past year’s rally has also attracted a category of investors whose enthusiasm isn’t always welcome: individuals. Client activity at TD Ameritrade Holding Corp. hit a record as the number of daily trades surged almost 50 percent in the past year. At E*Trade Financial Corp., the number of trades from which a broker can generate revenue is the highest ever.

“The list of growing challenges have caught up to stocks,” said Jim Paulsen, chief investment strategist at Leuthold Weeden Capital Management LLC. “We probably need a valuation correction for both stocks and bonds to be more appropriately priced for an economy now growing at 3% real/5% nominal at full employment with rising labor costs and capital costs.”