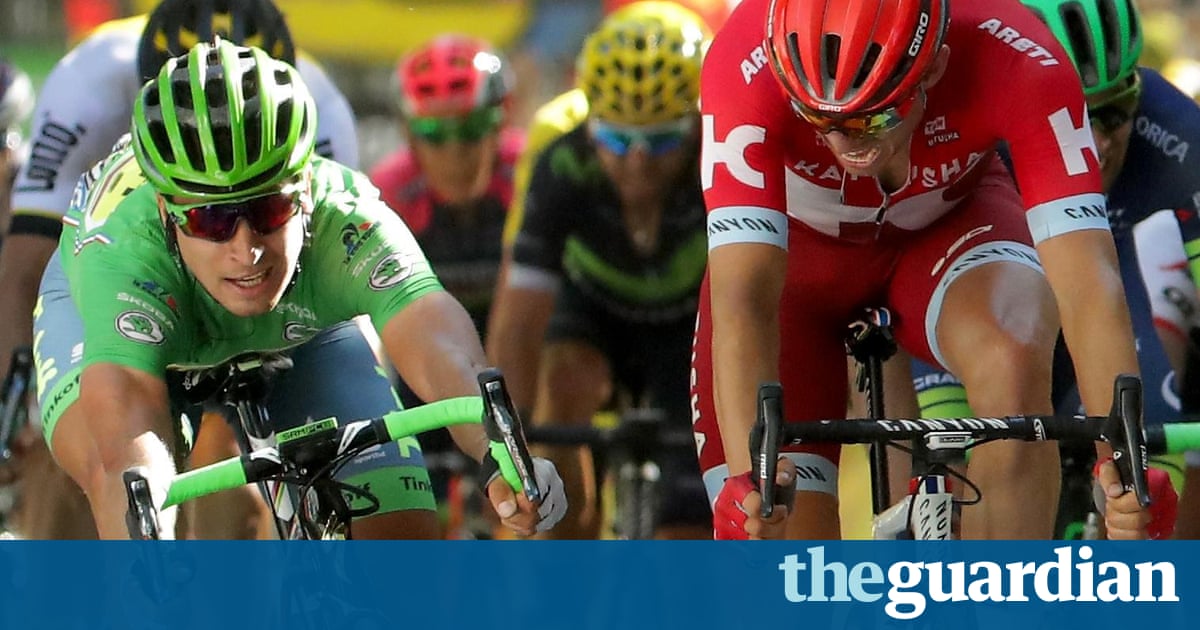 Fabian Cancellaras contribution to cycling has been substantial enough for the Tour organisers to give him what amounted to his own personal stage finish in the Swiss capital in the final Grande Boucle of his career but there was no fairytale ending for the 35-year-old.

Instead the stage win in Cancellaras home town went to the rider who has succeeded Spartacus as the man to beat in cobbled one-day races, Peter Sagan, who threw his bike at the line in dramatic style to pip another man of the Classics, Alexander Kristoff. For the third time this year the stage came down to a photo finish.

The sheer breadth of Cancellaras register is what has made him such a key figure in recent years. His professional career goes back almost 14 years, making him one of the same generation as Bradley Wiggins, whom he beat into second place in the Tour of Rhodes in his final season as an amateur. He has won the Tour prologue three times, plus a longer time-trial opener in Monaco in 2009, which has enabled him to wear the yellow jersey as recently as last year, and for a total of 29 days, placing him 12th in the all-time list.

On top of that the former cross-country skier has taken world and Olympic time-trial titles and three victories each in two of the greatest Classics, Paris-Roubaix and the Tour of Flanders. At times he has also shown himself as a successor to such as Bernard Hinault or Eddy Merckx as a leader within the peloton, for example when the 2010 Tour was hit by a spate of crashes on a descent in the Ardennes.

As so often happens when a rider is on the way out, his farewell Tour has not matched the hype and his principal contribution thus far came on the stage to Montpellier, when he swung over to the left to create the gap that enabled Chris Froome and Sagan to escape the remains of the peloton 10 kilometres from the finish. That in itself is a reflection of his waning ability, as the Cancellara of old would probably have formed that move.

He was sixth here on Monday, reflecting the fact that he has been overtaken by a new generation led by Sagan, and the bulk of the top 10 was formed by current Classics specialists: Kristoff and his fellow Norwegian Edvald Boasson Hagen, John Degenkolb of Germany, the Belgians Sep Vanmarcke and Greg Van Avermaet.

They headed a select group of 33, after the field split on a tough run-in with more than a soupon of spring Classic about it: a cobbled hill, curve after curve and a tricky little descent. Reflecting his current form and high morale, Mark Cavendish also figured, in a finish which did not suit him on paper.

Chris Froome and all the top 17 men overall were safely in there but the fact that riders began dropping off the pace five kilometres out, finishing up to 12 minutes down, reflected that for many of the 183 survivors the second rest day on Tuesday will be more than welcome. The temperature topped 30C again and the stage was run off at close to 30mph, as the peloton marshalled by Kristoffs Katusha, Sagans Tinkoff and Van Avermaets BMC kept close tabs on a two-man escape. Culozs unlucky hero from Sunday, Julian Alaphilippe, was not a threat but the German time-trial specialist Tony Martin could be given no latitude at all.