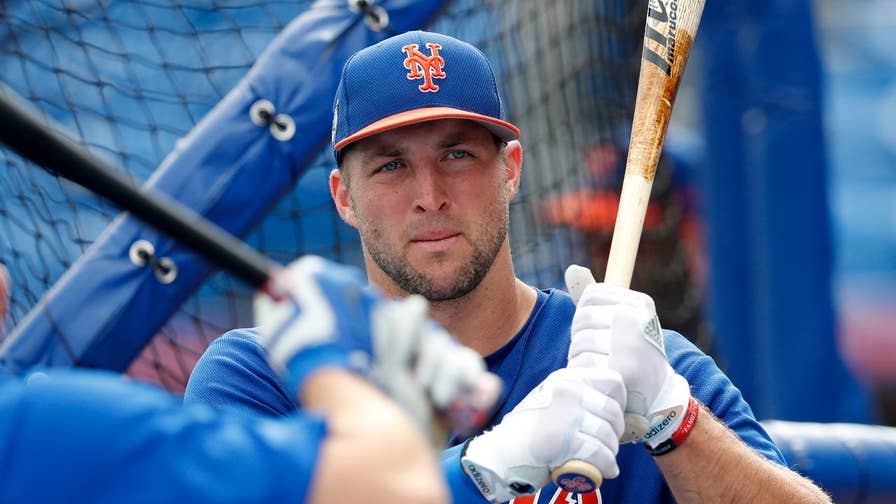 Tebow will play in majors according to Mets general manager

BINGHAMTON, N.Y. –  The fans lining the first-base line an hour before game time on a recent Monday night here were not waiting for one of the New York Mets’ top Double-A prospects or a major leaguer on a rehab assignment. They were hoping to glimpse the 30-year-old outfielder batting eighth for the Binghamton Rumble Ponies: Tim Tebow.

The road to the major leagues usually does not have an open lane for 30-somethings who are three years removed from a brief professional career in a different sport—the NFL—and 11 years past their Heisman Trophy glory. Yet Tebow keeps plugging away in baseball’s minor leagues on the idea that he can one day get to the majors.

“There’s so many other things that I could be doing that are a lot more money-driven and fame-seeking,” Tebow said in an interview last week. “But when I’m 50-years-old, that’s not going to matter. What matters is pursuing a passion and doing something that’s in your heart.”

“There’s so many other things that I could be doing that are a lot more money-driven and fame-seeking. But when I’m 50 years old, that’s not going to matter. What matters is pursuing a passion and doing something that’s in your heart.”

Tebow is not alone in thinking he might one day get the call up. Mets general manager Sandy Alderson has said Tebow is a real prospect and hopes he will one day play in the major leagues. His agent, Brodie Van Wagenen, says Tebow hit four days per week in the off-season, flying batting instructors to whatever city he was in.

Tebow is off to a modest start this season with the Mets’ Double-A affiliate. He’s hitting .240 on the season with a .324 on-base percentage and four home runs. But that hasn’t dampened the enthusiasm of the stream of Tebow fans trekking to Binghamton.

“I think he’ll make the big leagues,” said Jarrod Lunde, a 15-year-old from Daytona Beach, Fla., who visited earlier this month with a Tebow New York Jets photograph for him to sign.

To get there, Tebow will have to maneuver past players who are several years younger and have thousands more professional at-bats under their belts. Tebow and the Rumble Ponies hitting coach, Valentino Pascucci, say he needs more reps, more at-bats, more games, more time in the outfield. 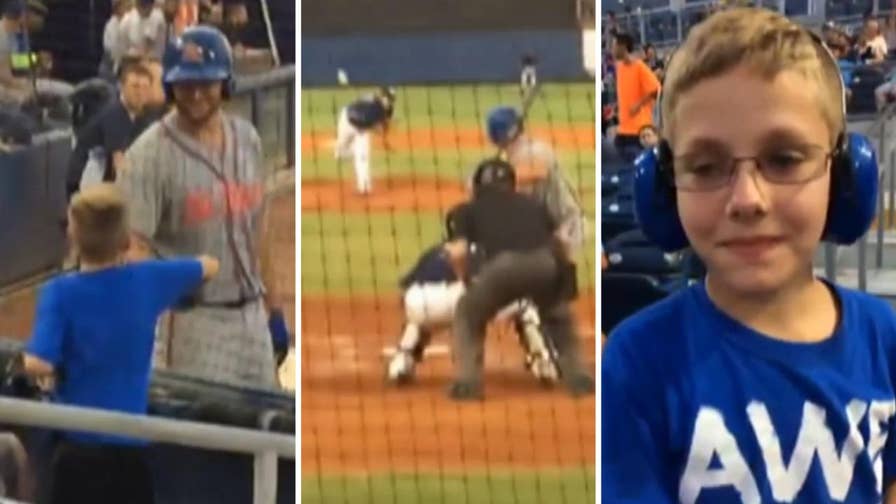 The single most impressive thing Tebow has done so far is display power. His 6-foot-3, 245-pound chiseled frame helps him generate bat speed and launch: He blasted a two-run homer on his first day in high-Class A. This season, he hit a three-run shot on the first pitch he saw.

During batting practice recently, he belted two baseballs off the scoreboard in right center. A few hours later, with the Ponies down 5-2, there was loud applause when he came to bat. Phones came out to capture the moment. He teed off on a 2-0 fastball and hit a 402-foot home run to tie the game.

“You watch him take batting practice, there’s no doubt about his power,” said Pascucci, a former Met who has known Tebow since he signed with the Mets in September 2016.

“You watch him take batting practice, there’s no doubt about his power.”

None of this is entirely new to him. Tebow played baseball until his senior year of high school, when he quit to focus on football. After a stellar career at Florida that ended in 2009, Tebow was selected by the Denver Broncos in the first round of the 2010 NFL draft and signed a five-year deal that guaranteed him $8.7 million. He was traded to the New York Jets in 2012 and spent brief stints with the New England Patriots and Philadelphia Eagles, but he was released before the 2015 season. He finished with a career record of 8-6 as a starting quarterback.

Tebow has since contributed to ESPN broadcasts, written an autobiography, grown his charity foundation and started playing professional baseball. When he began, it had been 11 years since he faced live pitching. Tebow acknowledged last week that he had a long way to go. Asked what model bat he uses, he smiled and looked at the cameras facing him in a news conference.

During spring training this year, Tebow peppered big league teammates like Jay Bruce and David Wright with questions. He asked center fielder Juan Lagares about his routes to fly balls. He spoke with pitchers Noah Syndergaard and Jacob deGrom about how they attack hitters. He texts former MLB sluggers Frank Thomas, Gary Sheffield and Ken Griffey Jr. for pointers.

“Gary will text me, ‘I just watched that at-bat. Get this down,’” Tebow says.

Tebow says he’s getting better with his jumps, especially when left-handed batters hit balls that tail. He’s learning to track baseballs near the outfield wall. He’s fine-tuning his two-strike approach, because he strikes out a lot.

Being Tim Tebow, he is still attracting attention for his charisma and devout Christianity.

His walk-up song is “Whom Shall I Fear,” by Chris Tomlin, a Christian artist. On his bat is the Bible verse John 16:33.

He navigates the Eastern League with the courteous poise of a professional celebrity. He locks eyes with many of the fans for whom he signs pictures and baseballs, reflexively repeating “Nice to meet you” and “You’re so welcome.” 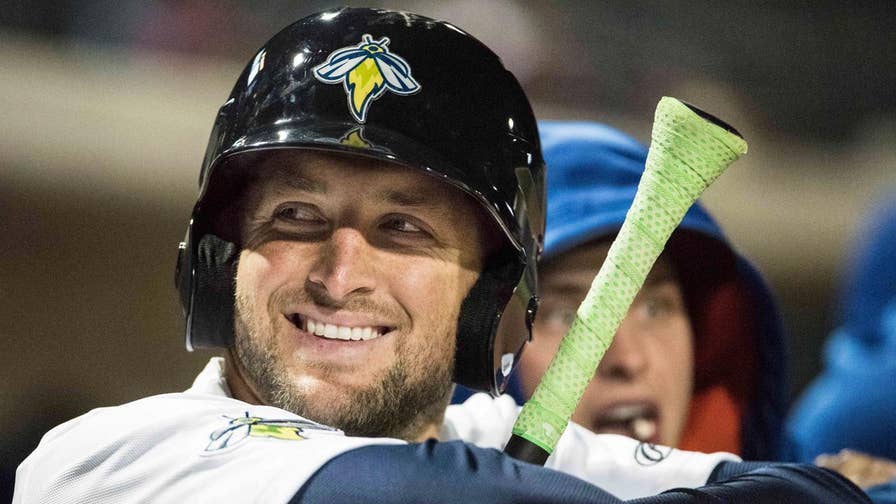 He doesn’t just get attention from fans. Opposing players ask about his college football days. When he’s at second base, infielders have told him that they found his book encouraging. Michael McHugh, the visiting clubhouse manager for the Portland Sea Dogs, said he was struck by how many times Tebow thanked him.

Rumble Ponies general manager John Bayne said attendance is only slightly up over the same period last season because the weather has been lousy. The reception away from Binghamton has been stronger, however. One team played the Florida Gators fight song when he approached the plate. In Hartford, Conn., near ESPN headquarters, Tebow’s on-air colleagues Scott Van Pelt, Trey Wingo, Mike Golic and Matthew Berry cheered him on as the Rumble Ponies played the Hartford Yard Goats.

In the end, what he’s doing now may not mean much. He could quit the game. But perhaps Tebow is pushing a reassessment of his baseball dream.

“This is not something that you pick up after 12 years that comes to you that fast,” Tebow said as he looked out to the field from the Rumble Ponies dugout. “But I feel like I’m adjusting, I’m getting there. This is something that I truly love.”