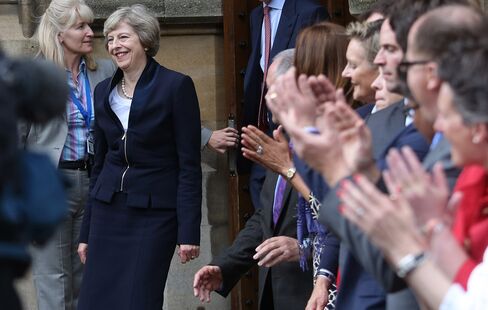 The U.K.s incoming Prime Minister Theresa May will have plenty to keep her busy once she moves into 10 Downing Street to take up the reins of power. Heres what Britains second female prime minister can expect from her first months in office.

July 13: Camerons last Prime Ministers Questions in Parliament, after which he visits Queen Elizabeth II to resign. The monarch will then invite May, 59, to form a government. Its traditional for fellow leaders including U.S. President Barack Obama, German Chancellor Angela Merkel and French President Francois Hollande to call the new prime minister to offer their congratulations. May will probably then start to announce the members of her ministerial team. She also has to move house, and say hello to her new pet cat.

July 14: The Bank of England announces its interest-rate decision. Economists expect the bank to cut the key rate for the first time since 2009. Mays first day in office could see her asked to comment.

July 18: Parliamentary vote on the renewal of the Trident nuclear deterrent. May has said it would be sheer madness to give up the weapons system. The opposition Labour Party is divided on the issue, providing May with a potential opening .

July 20: May will stand up for her first Prime Ministers Questions.

While all other major parties have called on May to hold an early general election, she said when she announced her candidacy that there should be no general election until 2020.

May, however, promised in her campaign speech to create a new government department, led by a pro-Brexit minister, to handle Britains negotiations with the European Union. This could be set up in August, although formal negotiations will only begin once Article 50 of the Lisbon Treaty is invoked.

September 4-5: The G-20 summit in Hangzhou, China. Cameron had planned to discuss U.K. steel with China at the forum, a task that will now fall to May as she meets many of her global counterparts for the first time.

September 9-10: Ecofin in Bratislava provides the first chance for Mays pick as chancellor of the exchequer to meet with fellow EU finance ministers.

September 15: Parliament rises and UKIP declares its new leader. Nigel Farage quit as party head following the Brexit vote, saying his political ambitions had been achieved. His replacement will determine whether UKIP continues to sap support from Mays Tories.

September 16: EU leaders meet without the U.K. for a summit to chart the EUs future direction.

October 2-5: Conservative Party fall convention. Held in Birmingham, May will address conference for the first time as leader.

October 5: An EU meeting on Afghanistan could be the forum for Mays first trip to Brussels as prime minister.

October 20-21: The EUs 28 leaders meet for the first time since the summer. The previous EU summit was dominated by Britains vote to leave the EU.

October 28: S&P could review the U.K.s credit rating, with a view to issuing a downgrade, after cutting the country to AA from AAA with a negative outlook after the Brexit vote.

Presumptive Republican nominee Donald Trump takes on Democrat Hillary Clinton, with the winner taking the oath of office in January. Will the winner commit to a special relationship with the U.K. post-Brexit?

Autumn Statement: May has ruled out an emergency budget in the aftermath of the Brexit vote, but the so-called autumn statement, where the U.K. chancellor updates lawmakers on the governments budget and spending plans, should take place as normal in the fall (there is no fixed date.) In her campaign launch speech May ruled out tax increases before 2020, saying they would disrupt consumption, employment and investment.

Article 50: May has said she wont trigger Article 50 to start Britains departure from the EU until at least 2017, with the process due to take two years.

The lesson of this Brexit ordeal? The EU is a club worth belonging to | Jonathan Freedland

Theresa May stands by adviser who outed Brexit whistleblower

Brexit is not the cause of Britain’s political breakdown. It’s a symptom | Gary Younge