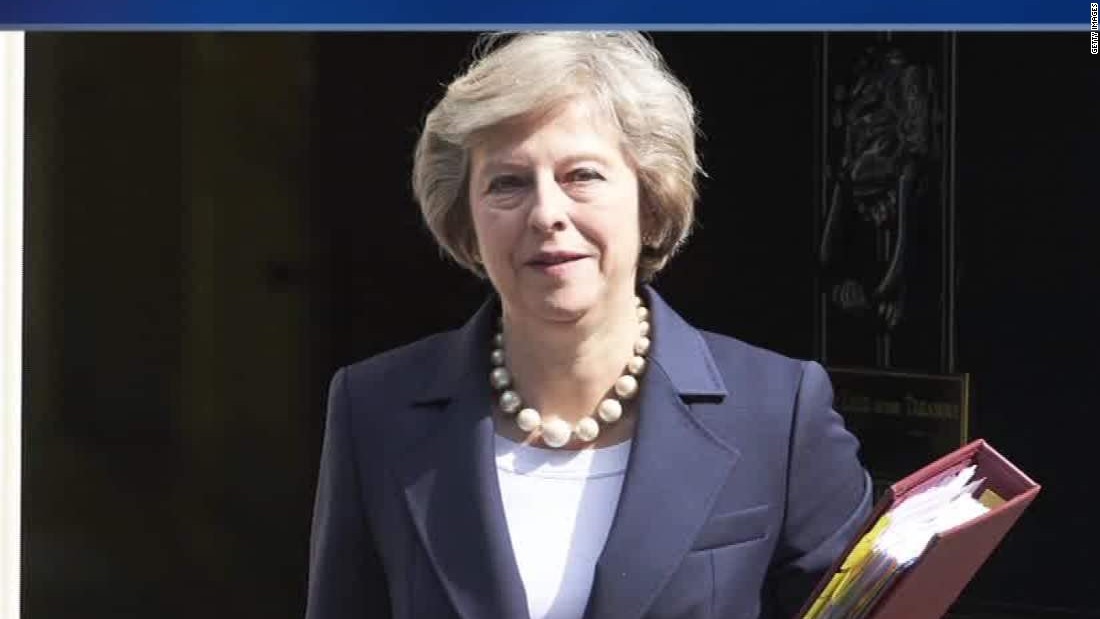 (CNN)Here’s a look at the life of Theresa May, prime minister of the United Kingdom.

Birth place: Eastbourne, England
Birth name: Theresa Mary Brasier
Father: Hubert Brasier, Anglican vicar
Mother: Zaidee (Barnes) Brasier
Marriage: Philip May (1980-present)
Education: St. Hugh’s College, University of Oxford, Geography, 1974-1977
Religion: Anglican
Other Facts:
Has Type 1 diabetes.
Was the first female chairman of the Conservative Party.
Was introduced to her husband in 1976 at an Oxford Conservative Association dance by Benazir Bhutto, later the prime minister of Pakistan.
Lost both of her parents in her twenties.
Co-founded Women2Win, an organization dedicated to increasing the amount of conservative women in Parliament.
Is the second female prime minister of Great Britain. Margaret Thatcher was the first. She served from 1979 to 1990.
Timeline:
1977 – Takes a job with the Bank of England.
1985 – Begins working for the Association for Payment Clearing Services as an adviser on international affairs.
1986-1994 – Councillor in the London borough of Merton.
May 1997 – Elected Conservative MP for Maidenhead.
1999-2001 – Shadow Secretary of State for Education and Employment.
2001-2002 – Shadow Secretary of State for Transport, Local Government and the Regions.
2004-2005 – Shadow Secretary of State for the Family.
May 2010-July 2016 – Home Secretary.
2012 – Introduces the controversial Data Communications Bill, which would require UK internet service providers and communications companies to collect more data about users’ online activities. Opponents call it the “Snoopers’ Charter.”
July 11, 2016 – Is named leader of the Conservative Party.
July 13, 2016 – Replaces David Cameron as British prime minister when he resigns after the UK votes to leave the European Union.
July 20-21, 2016 – Takes her first international trip as Britain’s prime minister, to Berlin to meet with German Chancellor Angela Merkel, and to Paris, to meet with French President Francois Hollande.
January 26-27, 2017 – During a visit to the United States, May becomes the first serving foreign leader from outside the US to speak at the annual congressional Republican retreat and the first foreign leader to meet with President Donald Trump since his inauguration.
April 18, 2017 – Calls for an early general election to take place.
May 22, 2017 – Following the Manchester explosion, May announces that election campaigning will be suspended until further notice.
June 8, 2017 – In a competitive general election, May’s Conservative Party loses its majority in the UK parliament, coming up eight seats short. The Labour Party, led by opposition leader Jeremy Corbyn, picks up 32 seats for a total of 262 seats.
June 9, 2017 – May visits Queen Elizabeth II at Buckingham Palace, an early step in the process of forming a new coalition government. May’s proposed new government will be a partnership between the Conservative Party and the Democratic Unionist Party of Northern Ireland. The next day, two of May’s top advisers resign, even as May herself rebuffs calls to step down.
September 22, 2017 – During a speech in Florence, Italy, May proposes a “strictly time-limited” transition period to ease Britain’s 2019 withdrawal from the European Union.