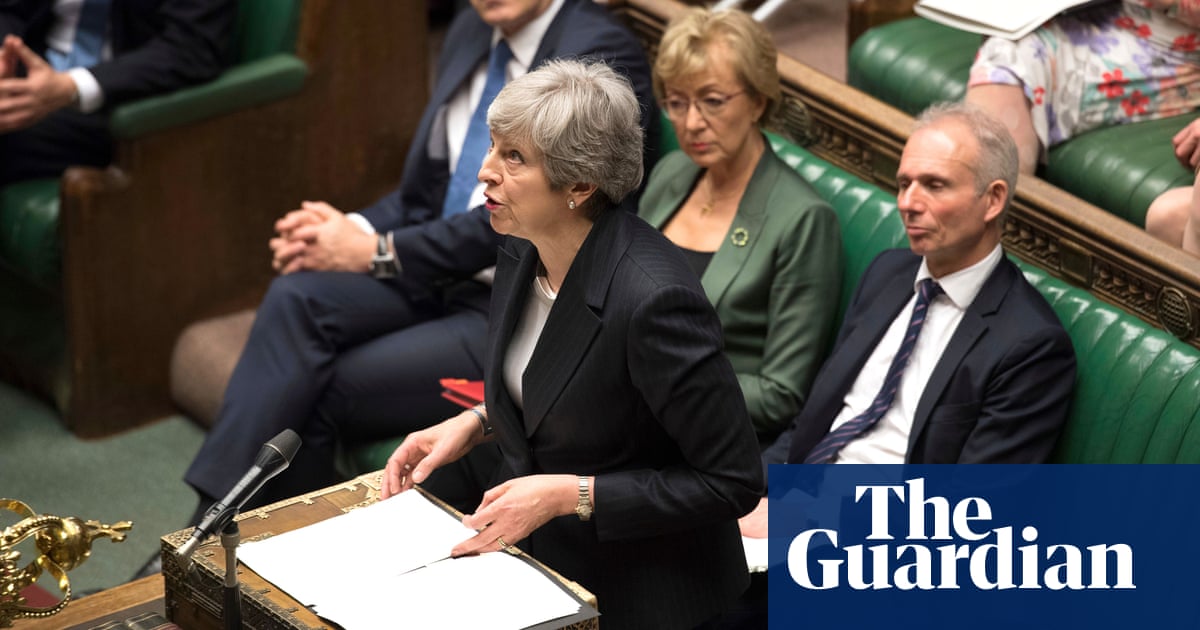 Theresa May is widely expected to announce on Friday that she will resign as Conservative leader, amid deep concerns among centrist cabinet ministers that candidates to be the next prime minister will have to promise a hard Brexit.

May’s allies believe that she will promise to step down as leader by 10 June after the state visit of US president Donald Trump and then stay on as prime minister until her successor has been chosen.

A Downing Street source said she is expected to name a date for her resignation at a meeting with Sir Graham Brady, the chair of the 1922 Committee of Tory backbenchers, on Friday morning, while staying on as prime minister for the duration of a leadership contest. “But everything remains quite fluid,” the source said.

The prime minister is under pressure to set out a timetable for her departure after being told in private meetings by foreign secretary Jeremy Hunt and Sajid Javid, the home secretary, they could no longer support her Brexit strategy opening the door to a second referendum.

A predicted near-wipeout for the Conservatives at the European elections held on Thursday has added to the pressure on her to go.

The publication of a timetable would kick off a leadership contest in which Boris Johnson is the favourite with the pro-Brexit Conservative membership. With the Tories expecting to see their vote annihilated by the Brexit party at the European elections, candidates will be seeking to win back those who were tempted by Nigel Farage at the polls.

However, efforts are already under way by cabinet ministers to frustrate Johnson’s campaign over fears that he will take the UK into a no deal Brexit after failing to renegotiate with Brussels.

A cabinet minister on the centrist wing of the party said moderates would not stay silent while the Conservatives were dragged to the right by Johnson and fellow hard Brexit candidates during a leadership contest.

“Expect many current ministers and others to come out and explain why leaving without a deal will be hugely damaging to the UK,” the minister said. “Candidates and party members will have to think long and hard about the consequences of no deal and explain how they would handle the consequences to the economy.”

The cabinet minister said those fighting against a hard Brexit would leave the party if a hardline Brexiter such as Johnson or Dominic Raab was elected as leader. “In 1997, the party was written off as dead and buried and we have been in power for nine years now,” the source said. “The Conservative party is pragmatic and power-focused.”

Another cabinet minister said there was serious concern that it would become a “virility contest” in which candidates would compete to propose the hardest Brexit, with those who had backed May’s deal including Hunt, Javid and Michael Gove under pressure to prove their no deal credentials.

It is understood that neither Hunt nor Javid directly called for the prime minister to resign in their private meetings, but they made their lack of support for her withdrawal bill clear.

May initially refused to see cabinet colleagues to hear their concerns that the legislation would open the door to a second referendum, but relented to meetings with them on Thursday where she was said to be in “listening mode”.

One cabinet source said May had held out hope that she could rewrite the withdrawal agreement bill to bring her cabinet on board, but that idea was now thought to be “pretty dead”.

Mark Spencer, a party whip, told MPs that publication of the legislation was delayed until the first week of June and that No 10 still hoped to hold a second reading vote on 7 June, but no government time was set aside for it.

With signs that a leadership contest is imminent, candidates were frantically trying to bolster their support with fellow MPs on Thursday. A source in one of the campaigns said the mood was “frantic” and people were “running round like headless chickens”.

At the same time, there was some evidence that May was still trying to pursue business as usual, as she appointed Mel Stride, an ally of Michael Gove, as a new leader of the House of Commons. He replaced Andrea Leadsom, who resigned on Wednesday night in protest at the withdrawal agreement bill offering a vote on a temporary customs union and second referendum.

If May does not announce a date for her resignation on Friday and tries to cling to power, the 1922 Committee is set to open a sealed envelope containing the results of a ballot on whether to hold another vote of no confidence in her leadership. Members of the committee indicated their patience would run out if May did not announce a timetable for her departure that sees her go by 10 June.

Sir Geoffrey Clifton-Brown, the committee’s treasurer, told the Press Association on Thursday: “I want her to give a timetable for when she will go. I think this blank denial from No 10 today may be a smokescreen because she does not want to influence the outcome of the European elections. Maybe she will still quit tomorrow.”

Asked what would happen if the PM did not announce a resignation date, he said: “I think there will be overwhelming pressure for the [1922 Committee] to change the rules and hold a ballot on confidence in the prime minister.”

Downing Street had no comment on reports that she would name her departure day on Friday. Her official spokesman said May was still “looking forward to welcoming” Donald Trump for his state visit on 3 June.

The prime minister is expected to stay on in No 10 while a leadership contest is under way, which could last six to eight weeks – or even over the summer.

With no Brexit deal signed, a short competition is likely to favour strong leave supporters such as Johnson, Raab, Penny Mordaunt and Leadsom over former remainers such as Hunt, Javid and Matt Hancock.

Some of May’s allies expressed dismay about the likelihood of her removal. Margot James, a business minister, said: “It’s all very regrettable, but she’s being hounded out of office because parliament will not make a decision and the parties just have an inability to compromise. But in the end there’s got to be a compromise.”