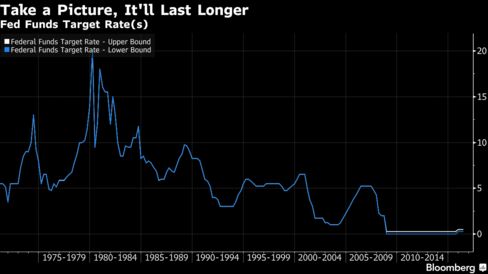 Bankers seeking to manipulate the London Interbank Offered Rate with a flurry of tactless messages probably had little idea that the impact of their actions would be felt all the way to the Federal Reserve target rate. Butlike bubbles from a bottle of Bollinger champagnethe effects of the Libor scandal are still emanating across money markets many years later.

In 2014, the Financial Stability Oversight Council (FSOC) asked U.S. regulators to look into creating a replacement for Liborone that would prove more immune to the subjective, scandalous, scurrilous whims of traders. The Alternative Reference Rates Committee (ARRC), as the resulting body is known, last month suggested two potential replacements for the much-maligned Libor.

While the new reference rate would be important simply by dint of underpinning trillions of dollars worth of derivatives contracts, its significance could go much further. Fresh research from Credit Suisse Securities USA LLC suggests the chosen rate could also become the new target rate for the Federal Reserve, replacing the federal funds rate that has dominated money markets for decades but has been neutered by recent regulation and asset purchase programs.

“The question of alternative reference rates and alternative policy rates are [sic] intertwined: ideally, they would be the same,” writes Zoltan Pozsar,  director of U.S. economics at the Swiss bank. “So it is likely that the rate the ARRC will ultimately choose will also be the Feds new target rate. But there are problems with both alternatives.”

A potential new target rate comes at a time when the federal funds market is said to be losing relevance because of new rules requiring banks to hold billions of dollars worth of high-quality assets on their balance sheets as well as because of the Fed’s quantitative easing (QE). While such regulation was aimed at strengthening the banking system in the aftermath of the financial crisis, it also had the unanticipated impact of shunting the federal funds market onto the sidelines at the precise moment the Fed is attempting to pull interest rates up, prompting the use of a new central bank tool known as reverse repurchase agreements (RRPs).

“QE and Basel III have euthanized interbank money markets,” writes Pozsar. “There isnt much happening in interbank money markets in general in a banking system awash with massive amounts of reserves that banks are required to hoard … to comply with new rules designed to ensure they can survive a 30-day liquidity storm.”

The explosion of excess reserves as a consequence of the Fed’s QE means that financial institutions have no need to tap this source of interbank funding. But regulations entail that all reserves have effectively become required reserves, Pozsar explains, as banks have a need to keep these high-quality assets to prevent their liquidity coverage ratios (LCR) from deteriorating.

With bank balance sheets largely consumed by these new requirements, little capacity is left over to engage in what was once the lifeblood of money markets: arbitrage. Where once the overnight interest rate paid by the Fed on banks’ excess reserves, known as IOER, tracked tightly with the target fed funds rate, they’ve since divergednecessitating RRPs as a means to drag rates up through transactions with money market funds as opposed to increasingly hamstrung banks.

Choose Your Own Acronym

While the Fed is faced with a fed funds target rate that’s fading into irrelevance, the ARRC has been eyeballing two alternative rates as it seeks to replace untrustworthy Libor. The two are the Fed’s new overnight bank funding rate (OBFR) and the overnight U.S. Treasury general collateral repo rate. The OBFR, which mixes fed funds with overnight eurodollar deposits to come up with an average cost of funds for U.S. banks, has emerged as the front runner in recent weeksgaining support from at least one prominent financial industry body last month.

The reasoning here is clear: The overnight eurodollar market is deep ($250 billion vs. an average $60 billion in fed funds) and features hundreds of participants vs. the 11 Federal Home Loan Banks (FHLBs) still active in the fed funds market. On the flip side, the OBFR deviates significantly from the fed funds rate in that it gauges offshore interbank funding as opposed to domestic.

To avoid the complications associated with this path, the Fed could settle in on the repo rate as its new policy target.

But here Pozsar also sees potential problems: “Switching to a repo rate won’t be simple either. In fact, it is impossible at present. Why? Because primary dealers do not have access to the discount window and so there is no ex-ante mechanism in place that would enable the Fed to cap repo rates in a crisis. And if you can’t cap it, you can’t target it.”

The debate highlights a bug (feature) of the post-crisis financial system. Banks are flush with cash and high-quality assets and unlikely to need to tap the Fed for extra liquidity (at least, not for 30 days), but broker-dealers remain shut out of reserve accounts at the Fed.

It’s a point, perhaps, that hasn’t been lost on New York Fed President Bill Dudley, who argued in a speech last month that the Fed’s discount window should be extended to primary dealers, potentially setting the scene for an official shift toward the repo rate. “Now that all major securities firms in the U.S. are part of bank holding companies and are subject to enhanced prudential standards as well as capital and liquidity stress tests, providing these firms with access to the discount window might be worth exploring,” he said.

Indeed, such a change has already been undertaken by Mark Carney’s Bank of England, which widened access to its so-called sterling monetary framework to include broker-dealers and central counterparties some two years ago. Still, Pozsar reckons it’s not time to declare a winner and break out the bubbly just yet.

“Until we hear more about dealer of last resort, do know that the OBFR is the only game in town,” Pozsar concludes.