The World Cup victory tour has been a bust, and beating up on hapless Concacaf teams does no one any favors. Lets get creative and build a bigger role for the NWSL 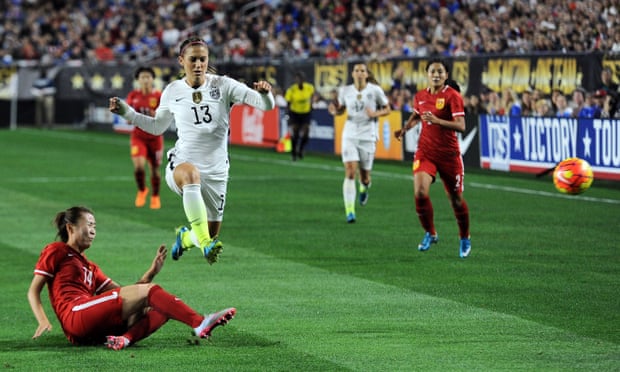 Somewhere along the path to Hawaii, the US womens soccer teams victory tour veered into Spinal Tap territory.

The team canceled a game in Honolulu, then returned to the mainland for a grim contest against a woefully underfunded and outclassed Trinidad & Tobago team in San Antonio. The first half of that game was marked mostly by an awkward non-contact injury to Trinidad & Tobago defender Lauryn Hutchinson and a dubious penalty kick after Alex Morgan plowed into T&T goalkeeper Kimika Forbes, with the referee revealing the baffling decision after both players were down for several minutes.

The disappointing crowd of 10,690 sounded smaller, imposing a funereal atmosphere on the proceedings until the USA exploded for five second-half goals, three by Christen Press, for a 6-0 win. Then, like the yo-yo team in The Simpsons being herded back into the van to hit three more schools, the US women moved on to the next game three days later.

On Wednesday night, Abby Wambach will bid farewell in New Orleans Superdome. And the world champions will at last wrap up a tour that started in August with a pair of games awkwardly crammed into a short break in the NWSL schedule. (In fact, one US game overlapped with a rescheduled league game.)

This situation is preventable, but it requires a rethink. Its time to treat the USWNT as a national soccer team rather than a traveling circus.

That means scheduling more friendlies that expand the player pool by trying out women who have excelled in the pro NWSL, in college, or even in Europe. That means having a few games in which even team cornerstones like Carli Lloyd (played all 25 games in 2015), Meghan Klingenberg (also 25) and Becky Sauerbrunn (24) get a break.

More developmental games. Fewer ceremonial excursions with players celebrating their 100th or 200th cap by beating up on a hapless opponent from Central America or the Caribbean.

Sounds obvious, but that change wont be easy. Several parties have an interest in the status quo:

Coach Jill Ellis has managed to sneak a few new players into the mix. To an extent, her hand has been forced by the holes in the roster that have popped up since the World Cup Lauren Holiday, Shannon Boxx and Lori Chalupny have retired, and Megan Rapinoe was injured on the teams catastrophic trip to Hawaii but shes also smartly rotating players through a busy stretch of games.

Ellis herself remains an enigma a few months after winning both the World Cup and a new contract. Does she only change personnel and tactics when the decisions are forced upon her? Or is she a mad genius who planned all along to ditch the teams direct style (and remove Wambach from the starting lineup) for the games that mattered in the World Cup? Will she hold an open competition for places leading up the Olympics next summer, or will it take an injury like the Christie Rampone injury that gave Julie Johnston a chance to seal a place on the back line to make her consider new players?

US Soccer reinforces the barrier between national teamers and non-national teamers with the allocation structure in the NWSL. The federation subsidizes the salaries of a select group of players, barely bigger than the 23-player roster limit for a World Cup. (The Olympic roster is smaller just 18.) Perhaps that money could be spread among more players or just handed over to clubs as a lump sum.

The NWSL needs to take over many of the roles the womens national team is currently filling not just in expanding the player pool but also in evangelizing for the sport. One national team can only play so many games in so many places. A 10-team league brings hundreds of games to US soil every year.

And with a bit of creativity, NWSL teams can bring something new to stadiums and television. Instead of trotting out repetitive international matchups against Concacaf minnows or China or whoever is willing to take some money to play here, imagine a couple of games pitting FC Kansas City and the Seattle Reign against European powers like Wolfsburg or Paris Saint-Germain.

Again, some players might not like focusing on their clubs instead of their national team. But the traveling circus simply cant continue. And if gender equity is the goal, isnt it time to treat the womens team the same way mens teams around the world are treated?

Especially if it will lead to a better team, a wider base of fans and players, and fewer Spinal Tap moments.