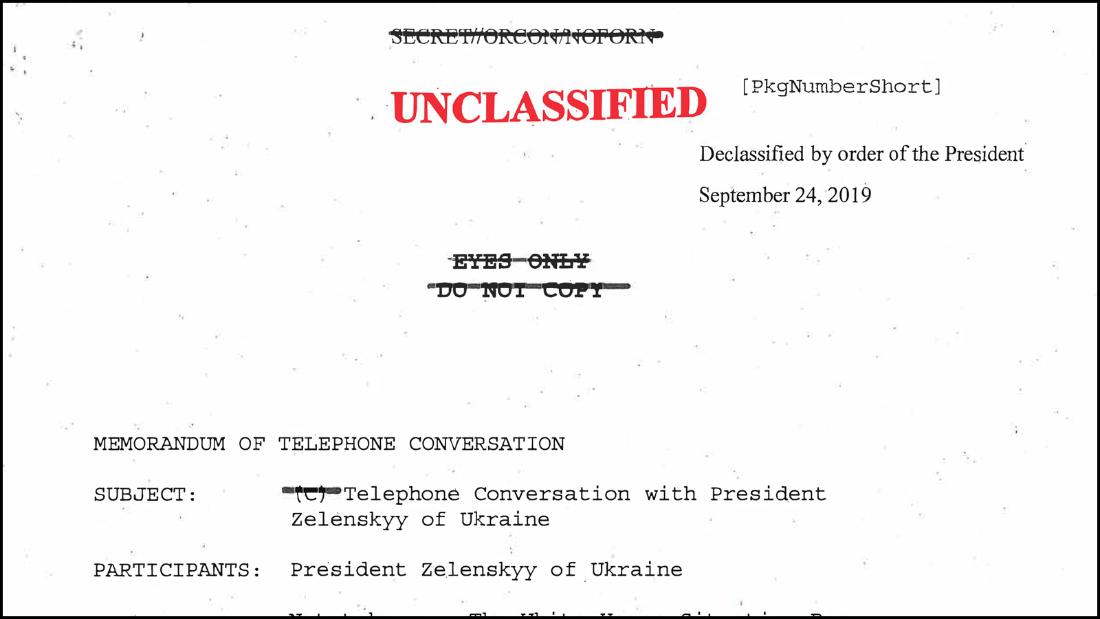 (CNN)The transcript of a July phone call between President Donald Trump and his Ukrainian counterpart Volodymyr Zelensky amounts to a clear case of a (barely) unspoken quid pro quo involving the digging up of dirt on Democratic presidential candidate Joe Biden.

1. Trump, after congratulating Zelensky on his win, very quickly establishes that the United States has been very, very good to Ukraine. “I will say that we do a lot for Ukraine. We spend a lot of effort and a lot of time. Much more than the European countries are doing and they should be helping you more than they are.”
2. He then makes clear that the US does a lot more for Ukraine than Ukraine does for the US.
“I wouldn’t say that it’s reciprocal necessarily because things are happening that are not good but the United States has been very, very good to Ukraine.”
3. Trump directly asks Zelensky to investigate Joe Biden and his son, Hunter.
“There’s a lot of talk about Biden’s son, that Biden stopped the prosecution and a lot of people want to find out about that so whatever you can do with the Attorney General would be great. Biden went around bragging that he stopped the prosecution so if you can look into it … It sounds horrible to me.”
4. He suggests that Zelensky should talk to his personal lawyer Rudy Giuliani and Attorney General Bill Barr.
“I will have Mr. Giuliani give you a call and I am also going to have Attorney General Barr call and we will get to the bottom of it.”
5. And then Trump reiterates that suggestion
“I will tell Rudy and Attorney General Barr to call.”
So, in sum: The President of the United States tells a foreign leader that we do a lot for his country and his country hasn’t done enough for us. Then he says that it would be super nice if Ukraine looked into allegations — debunked by all independent fact checkers and there is no evidence of wrongdoing by either Joe or Hunter Biden, it’s worth noting — that his main rival in the 2020 race did some unethical things in the country. Because, he asserts, it sounds “horrible” to him. And then reiterates — several times! — that the Ukrainian president needs to talk to his personal lawyer and his administration’s attorney general about all of this.
Are you kidding me? And reminder, this isn’t even really a transcript of their call. As the document notes: “The text in this document records the notes and recollections of Situation Room Duty Officers and NSC policy staff assigned to listen and memorialize the conversation in written form as the conversation takes place. A number of factors can affect the accuracy of the record, including poor telecommunications connections and variations in accent and/or interpretation.”

Even if Trump hadn’t openly asked Zelensky to look into Biden and instead only suggested that he had heard rumors of corruption regarding the Bidens and Ukraine, this call would be problematic. Because the United States is a global superpower which was, at that moment, withholding loan money from Ukraine — a fact that the newly elected president of said country would be intimately aware of. That Trump just came out and asked for Zelensky to investigate the Bidens — after reminding him several times of how much the US did for Ukraine!!!! — is something very close to the textbook definition of a quid pro quo.
Take it out of the context of politics. Let’s say you are a small business owner who has seen an uptick in business thanks to a series of referrals coming to you via a much larger company. And the CEO of that much larger company calls you and says something like “We are doing a lot of good for your bottom line, right? More than you are doing for us. So, hey, our biggest competitor is apparently doing some pretty nasty things with their workers. You should really look into that.”
Now the larger company CEO didn’t come out and say, “Hey, do this muckraking of our main competitor or else your pipeline gets cut off by us,” right? But unless your brain stem has somehow disconnected from your brain, you know exactly what is being asked here. Do this, or else.
It’s hard to imagine why Trump, knowing what he said, would have spent the past 48 hours defending the call as “perfect” and totally above board. The actual transcript makes that pre-spin laughable.
“It ended up being a nothing call,” Trump said in the wake of the release of the transcript on Wednesday morning.
But what is documented, very clearly, in this kind-of, sort-of transcript is this: The American President pressuring a foreign leader to look into the frontrunner for the 2020 Democratic presidential nomination. And doing it by reminding the Ukrainian President of all the US has done for his country.
The transcript is truly stunning stuff — even from a President who has moved the goalposts on “stunning” a long time ago. If Trump thought releasing this transcript would somehow make Democrats look like fools for beginning an impeachment inquiry against him, he was wrong. Very, very wrong.