Greetings from the apocalypse! I’m writing from the Summer of 2017, when wildfires have made Idaho and California smell like the Devil’s Vegan Barbecue, the sun is the color of a fresh period stain, and the Gulf Coast is aligned with the first teat of a four-boobied hurribeast. 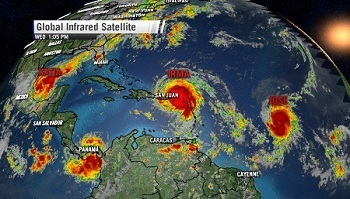 In a moment when it feels blasphemous to send anything but prayers, goodwill, money, awareness, donations, and time to everyone suffering from Harvey and the triplets of evil following it, there’s another story that needs to be told about these hurricanes:

There is no upside, silver lining, or good news coming.

More hurricanes, floods, and fires are on their way, and no one, not even the Americans in the Middle, are immune to what future natural disasters will do to this country. Not even Texas. Actually, let’s start with Texas.

I’m from South Texas, where the school year doesn’t feel real until you’ve had a Meet the Teacher night and a hurricane warning, sometimes on the same day. In my fuzzy childhood memories, hurricanes were exciting moments at the end of summer when you got to fill up your bathtub with a reckless amount of water and pray for a day off from school.

Which explains why hurricane parties are a thing, and why you can find all of your hurricane party decorating needs on Pinterest. No other natural disaster comes with such a slow build and a festive atmosphere. And when hurricane season is built into your seasonal routine — my little sister was named after a hurricane that hit Texas 19 years before she was born — you just roll with them as best you can.

So I wasn’t surprised that most of my friends, family, and childhood friends’ families didn’t evacuate when they knew Harvey was coming. It is very hard to get on a bus going to a place you don’t know for a thing that may or may not ever come. And Houston? Forget it. If you thought Houston should have been 100 percent evacuated, you’ve probably never been there. During Hurricane Rita, there were 100 deaths in Texas, 60 of which were related to Houston’s disastrous attempt to evacuate three million residents all at once.

The Single Most Entitled Reaction To Modern Problems

I also wasn’t surprised that Texans went nuts helping each other out once the waters started rising. Not because Texans are uniquely neighborly compared to other humans in distress, but because we’re uniquely good at self-publicity. It’s kind of our thing. That said, if you have South Texas friends on your Facebook timeline like I do, you know there were convoys of volunteers ready with food and water before Harvey was even done with its dirty business. Behind every dramatic rescue moment that went viral, there were thousands that no one saw, and for every tone-deaf Joel Osteen, there were hundreds of churches (and synagogues, and mosques!) mobilizing to provide immediate relief. I said there wasn’t a silver lining to Harvey, but that’s actually not true; after a summer of awful news, the storm reminded us that people are good.

The problem is that being good in dangerous moments isn’t going fix next season’s weather. And this season’s hurricane victims are only facing the beginning of their problems.

The Next Round Of Rescues Won’t Have Viral Videos

Here’s what’s coming: Ten years after Katrina, New Orleans doctors reported a three-fold increase in heart attack victims. The stress from the flooding, multiple relocations, and disruptions in medical care are still messing with the bodies of the people who survived the storm. In the next few months, we should expect to see people contracting gastrointestinal problems from wading in standing water (I mean, we won’t literally see their diarrhea, but you get it). People with chronic issues like diabetes, heart disease, and asthma will suffer from disruptions in their medical care, which will lead to more hospital visits and deaths. It’s probably worth noting that Texas and the rest of the Gulf Coast aren’t in good shape to begin with, health-wise.

Wait! It gets worse! I haven’t even talked about the mosquitoes yet! The West Nile virus was completely wiped out of the population in the immediate aftermath of Katrina. A year later, West Nile cases doubled. This map shows the Texas counties that identified cases of West Nile virus back in May, before hurricane season started: 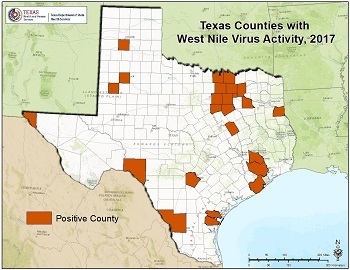 Nine counties in Texas have already started asking pregnant women to get the Zika test, because as you probably remember, Zika means joint pain, rashes, and fever for adults, but severe brain damage, microcephaly, and even death for unborn children.

Wait, it gets even worse! Texas slashed Planned Parenthood funding in 2011, and abortions have been on the rise in the state ever since. What does that mean for pregnant women wading through mosquito-infested waters or working on cleaning up the debris outside their house right now? Hopefully nothing. Hopefully we never see Zika again, and these pregnant women deliver healthy babies who have happy lives ahead of them. Hopefully Texas women who aren’t pregnant today will have plenty of access to contraceptives in the next few months, because the mosquitoes might last until Christmas this year. There’s just some more bad news from Katrina that we have to cover, though:

Katrina’s kids never quite recovered from the storm, either.

Experts say that we’ll never know how many Louisiana children lost a year or more of school after Katrina. They know that Louisiana has one of the country’s highest rates of young adults who aren’t in school and aren’t at work — not because the kids who suffered through the storm just quit school then and there and committed to the hobo lifestyle, but because the average Katrina student moved seven times after the storm. Seven moves would do a number on any student, even the rich ones who are moving because their parents are moving up the corporate ladder or the tough military kids who move because the government makes them. Combine seven moves with a traumatizing childhood event, separation from extended family and communities, economic hardship, and the struggle to rebuild a life in a place where most of your friends and family are suffering through the same problems you are, and yeah, it’s no wonder Katrina’s students didn’t have a great graduation rate.

And not finishing school a is big deal, because …

We Like To Help Drowning People, But We Suck At Helping Poor People

At the end of the day, bad things happen to everyone, but bad things happen extra hard to poor people. Sickness, natural disasters, layoffs, and addiction can obviously hit anyone at any financial level, but the most vulnerable among us have the hardest time recovering, if they recover at all. In other words, when you’re poor, a flood can lead to a series of setbacks that have decades of consequences. It’s called the Bad Break Test, and America is failing it.

One researcher put the Bad Break Test this way:

“In societies that function well, there are various safety nets in place to prevent a bad break from leading to a tailspin for particularly vulnerable victims. Compared to many other rich nations, the U.S. is not such a society — all too often, when vulnerable Americans encounter a bad break, there’s nothing underneath them to stop their slide. Instead, devastation follows, sometimes in the form of bankruptcy and addiction and death.”

For example, America’s opioid crisis didn’t happen in a vacuum, and it certainly didn’t happen because of Mexicans. Some economists call the increase in overdoses, alcohol poisoning, and suicides “deaths of despair.” Americans are killing themselves over their economic prospects. There comes a point at which people stop trying to break out of their hopelessness and just start numbing themselves to death.

What does the Bad Break Test have to do with hurricanes? 22 percent of Houston’s residents live under the poverty line. Yes, Texans are #TexasStrong and #TexasProud and will rebuild, but let’s not kid ourselves over who will bear the brunt of this storm and every storm to come: poor people who don’t have savings, insurance, or a Plan B or C or D to rely on when everything they own is destroyed. They’re already living in their Plan D, and Plan D is underwater or covered in mold.

How do we cope with the millions of coastal Americans who have decades of hurricane seasons to come? The ones who are forced to leave already have a name, by the way: “climate refugees.” One Louisiana town has been granted 48 million federal dollars to just get out before the Gulf swallows them. The entire town is the first community in the world to get federal money to rebuild somewhere else before their island is washed away, and they’re struggling with figuring out how to do it. Even though we’re only talking about 60 people, they haven’t figured out how to move, and aren’t totally sure they even want to go.

And that’s why we should all be worried. Humans are great at handling danger when it’s at the door, but not when it’s a hundred miles or a year away.

Real talk: The American states that will need the most help tackling flooding and extreme weather in the coming years also voted to keep the government out of their lives in the 2016 election. The fierce independence and self-reliance that Texas is so proud of is exactly what will doom them. Houston didn’t just flood because of a lot of rain; it flooded because it let people build neighborhoods in known flood zones. Why? Because the only reason white people live in Texas in the first place is that Anglos wanted space. Every time people try to build something in Texas, no one has the guts to tell them “No.”

Footnote: The previous statement is not true. Mexico had the guts to tell people to stop building houses in Texas.

Extra footnote: There are lots of conservationists and environmentalists in Texas. They’re just not in charge.

It’s going to take a lot of tax dollars, research, government oversight, discipline, and humility to keep the Atlantic Ocean from swallowing our coasts, and our red states aren’t up for the challenge yet. We listen to our weathermen when the storms are a few days away, but not our scientists and engineers when they tell us that planning for disasters takes years and money. The thing is, Texas has a TON of money. We don’t even have to reinvent the wheel to save lives; we can study how a little bitty country like the Netherlands tackled their own flood monster and lived to tell the tale. If it were up to me, I’d pay close attention to any country that landed on “FLOODPLAIN COUNTRY” as its official name.

You can find more from Kristi deep in the heart of Twitter.

You can help someone in need by donating to the Victoria Food Bank.