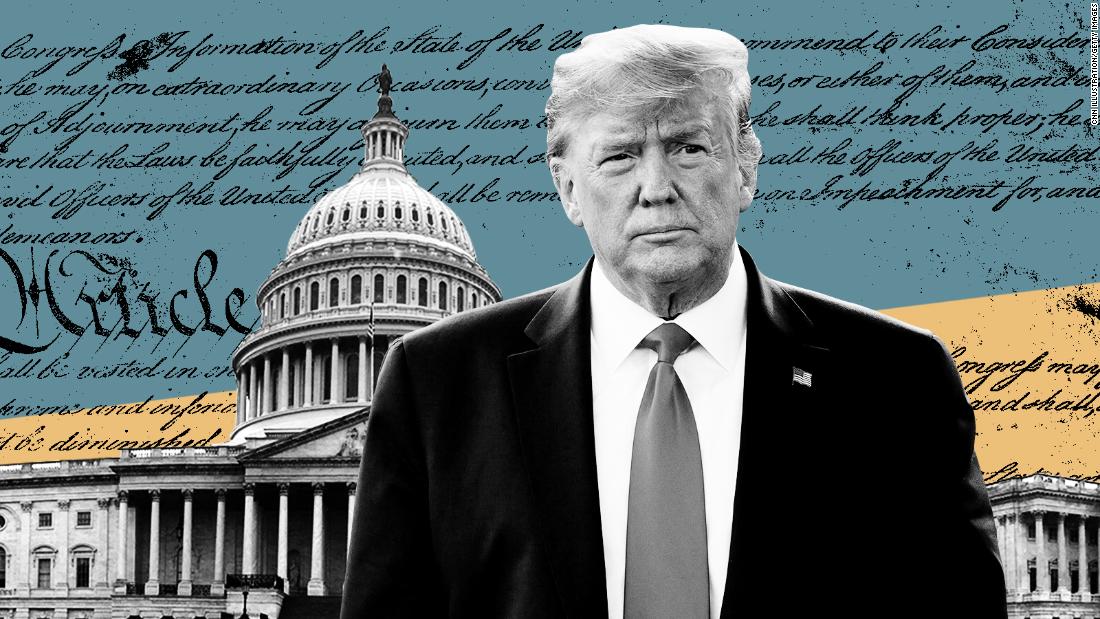 Washington (CNN)President Donald Trump has been trying to avert impeachment, tweeting furiously to influence public opinion and predicting that any legal battle could go all the way up to the US Supreme Court.

Important disputes over Trump documents for various investigations, in Washington and New York, are certainly being heard by federal judges and likely to land before the nine justices. A paradigm of the Supreme Court impact on a president was United States v. Nixon, the 1974 case that forced President Richard Nixon to turn over the Watergate tapes. He eventually resigned rather than face impeachment.
But a different Nixon case stands for the proposition that an actual House of Representatives impeachment or Senate trial would not be settled by the justices.
In the 1993 case of Nixon v. United States, the Supreme Court ruled impeachment “nonjusticiable,” that is, a political question. Under the Constitution, Congress bears the responsibility and control for a presidential impeachment.
The determination involved not the former president but US District Court Judge Walter Nixon of Mississippi, who had been impeached and convicted in 1989. He subsequently challenged the Senate procedures used.
Today, as members of the US House continue hearing witnesses related to Trump’s dealings with Ukraine, that Supreme Court decision could become more salient. A new CNN poll found that half of Americans now say Trump should be impeached and removed from office. 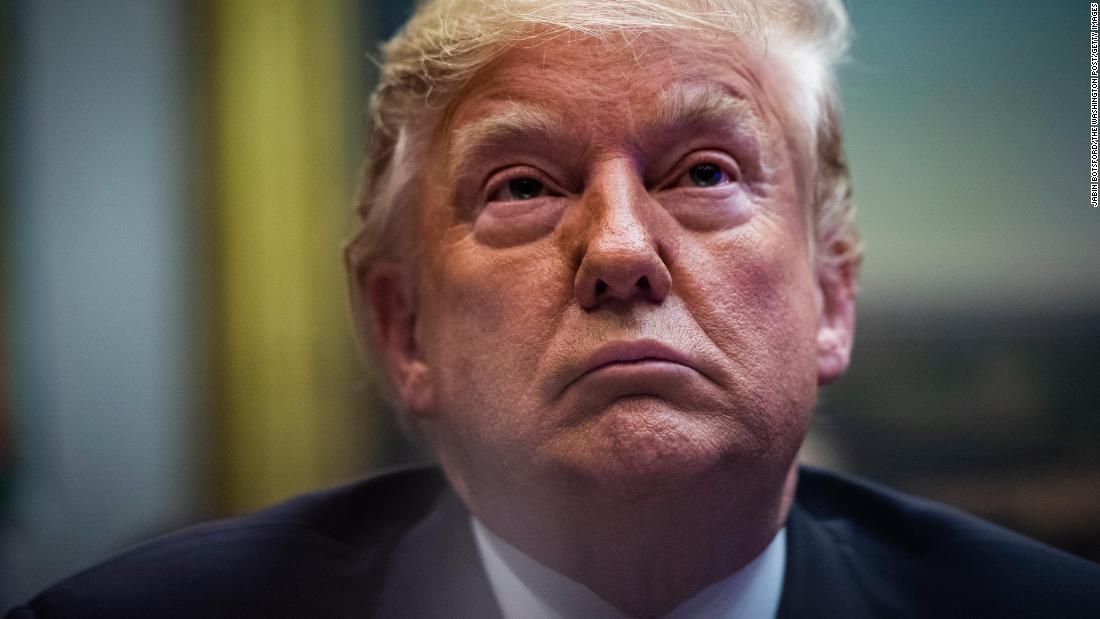 Trump has been fighting the threat of impeachment on every front. On Tuesday, he called the House Democrats’ inquiry a “lynching,” stunningly comparing the current constitutional process with America’s dark history of murders of African-Americans.
Earlier this month, he dismissed reporters’ questions about the House’s inquiry spurred by a whistleblower complaint, saying: “The whole thing is a scam. It’s a fix. And we wrote a letter yesterday, and it probably ends up being a big Supreme Court case. Maybe it goes a long time.”
He was referring to White House counsel Pat Cipollone’s October 8 letter to House Speaker Nancy Pelosi and other House leaders deeming the impeachment inquiry unconstitutional and vowing not to cooperate.
Among Cipollone’s objections was that the full House had not taken a vote to authorize the inquiry. Overall, he wrote, the House was operating “in a manner that violates fundamental fairness and constitutionally mandated due process.” His letter appeared based on the premise that House committees were operating in a judicial realm rather than as part of a political process.
Any attempt to induce the Supreme Court to intervene to stop a House impeachment would slam into that court precedent from a quarter-century ago, which reinforced the political character of an impeachment and trial, along with the constitutional roles of the House and Senate.
Under the Constitution, then-Chief Justice William Rehnquist wrote in Nixon v. US, “the whole of the impeachment power is divided between the two legislative bodies, with the House given the right to accuse and the Senate given the right to judge.” The Constitution gives the House “sole” power to impeach and the Senate “sole” power to try a case.
Rehnquist grounded the court’s decision in the words and history of the Constitution and added, “opening the door of judicial review to the procedures used by the Senate in trying impeachments would expose the political life of the country to months, or perhaps years, of chaos.
“This lack of finality would manifest itself most dramatically if the President were impeached,” he stressed.

Trump impeachment tracker: Following all the action in Congress

Key allegations from the Ukraine whistleblower are true, despite what Trump says

Earlier this month, US Appeals Court Judge Neomi Rao, cited the 1993 Nixon case — but almost incidentally — as she dissented from a DC Circuit ruling that upheld the investigatory power of the US House and its subpoena for eight years of the President’s financial documents. That dispute began months ago, independent of the Ukraine matter.
In her dissent, Rao contended that the US House could investigate Trump for wrongdoing only as part of an impeachment process. She referred to Nixon v. US as she asserted that the Supreme Court “has long recognized the enhanced protections required by impeachments functions, even if such matters are generally not justiciable.”
The 1993 case, coincidentally, was handled by a number of Department of Justice lawyers who have become more prominent and positioned for roles in a Trump impeachment battle.
Among the lawyers who signed the brief against Judge Nixon were John Roberts, now chief justice of the United States (under the Constitution, he would preside over any Senate trial) and Douglas Letter, currently general counsel to the US House of Representatives.
Roberts was then principal deputy to US Solicitor General Ken Starr, who took the lead in the case. Starr’s independent counsel investigation of Bill Clinton would lead to Clinton’s impeachment in 1998.

‘Most fit depositary of this important trust’

Judge Nixon had first been convicted in a criminal trial for lying to a grand jury about his efforts on behalf of a defendant whose father had given him money. After his conviction and sentencing, Nixon faced impeachment by the House of Representatives and a Senate trial.
Federal judges are appointed for life, and impeachment is the only way to strip them of their post and stop their judicial salary. The process for impeaching a federal judge is the same as impeaching a president. 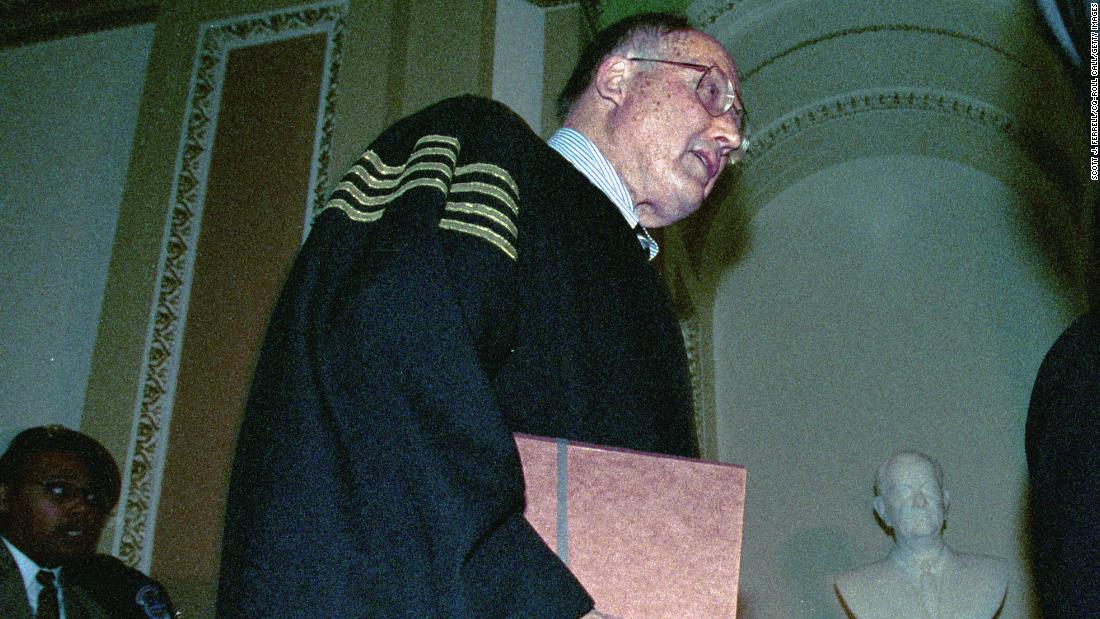 Challenging his Senate conviction, Nixon claimed senators’ use of a committee to take evidence violated the constitutional mandate that the Senate “try all impeachments.”
Solicitor General Starr argued at the time that only the “politically accountable” branches of Congress, not the “life-tenured judiciary,” had authority over the impeachment process.
The Supreme Court agreed. All nine justices rejected Nixon’s complaint about the Senate rules and seven justices, including Rehnquist, concluded that Nixon’s claim presented a “political” question beyond review by judges.
In his opinion for the majority, Rehnquist delved into the constitutional history and debates among the framers to support the notion that impeachment was not the business of the judiciary. 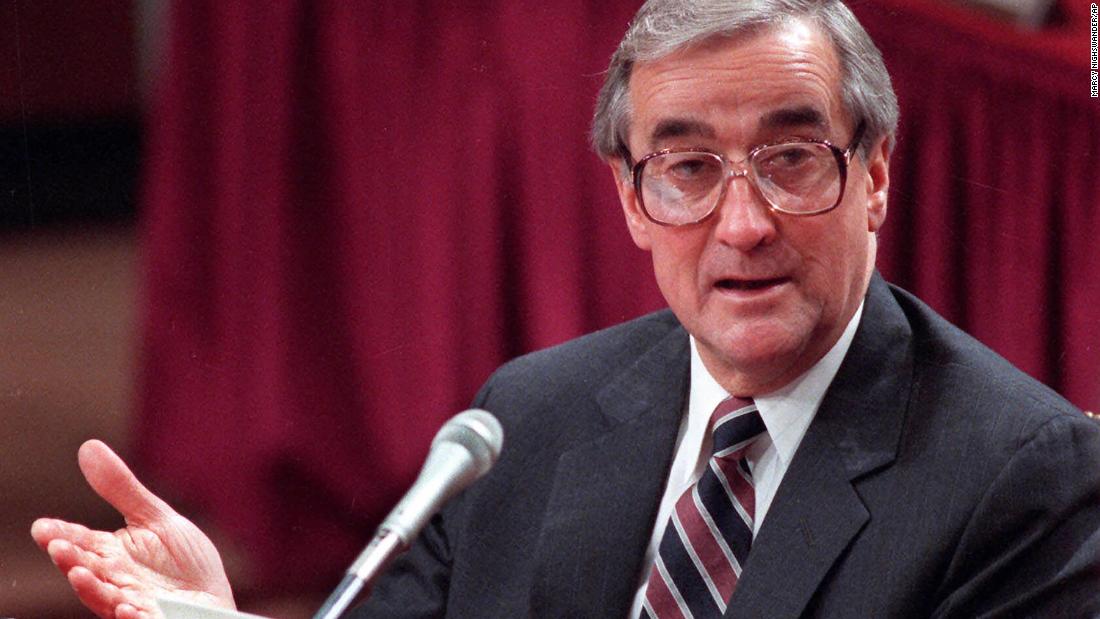 “The Framers labored over the question of where the impeachment power should lie,” Rehnquist recounted. “Significantly, in at least two considered scenarios, the power was placed with the Federal Judiciary. …. Despite these proposals, the Convention ultimately decided that the Senate would have ‘the sole Power to Try all Impeachments.’
“According to Alexander Hamilton, the Senate was the ‘most fit depositary of this important trust’ because its members are representatives of the people,” he added.
In a practical vein, Rehnquist said judges should stay out of impeachment disputes because of the potential “lack of finality.” If a President were removed and a court challenge continued, Rehnquist explained, “the legitimacy” of a successor would be undermined, especially if the Senate held a new trial and reversed the conviction.
Most broadly, the court rejected Judge Nixon’s assertion that some constitutional “check” was needed on Congress’ impeachment process. 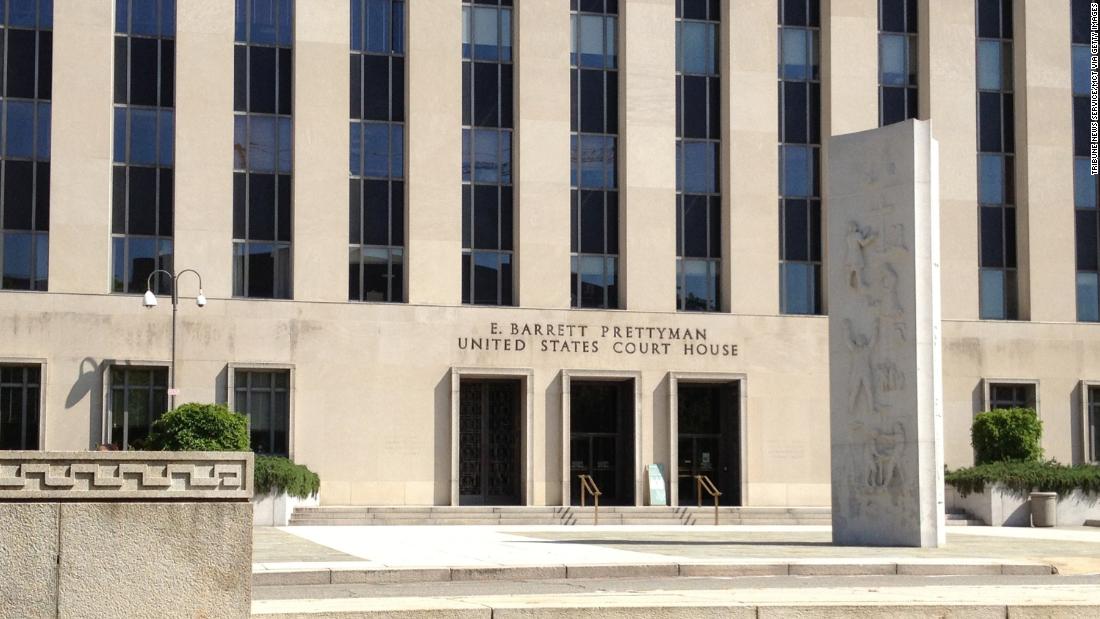 “The Framers anticipated this objection and created two constitutional safeguards to keep the Senate in check,” Rehnquist wrote. “The first safeguard is that the whole of the impeachment power is divided between the two legislative bodies, with the House given the right to accuse and the Senate given the right to judge. … The second safeguard is the two-thirds supermajority vote requirement.”
Today that means that even if the Democratic-led House votes to impeach Trump, with the requisite simple majority vote, he could be convicted only if the Republican-controlled Senate produced a two-thirds majority against him.
At the same time, the Nixon ruling means that the Supreme Court — with its justices already worried about becoming ensnared in Washington’s politics — would be shielded from perhaps the ultimate battle over Trump’s presidency.