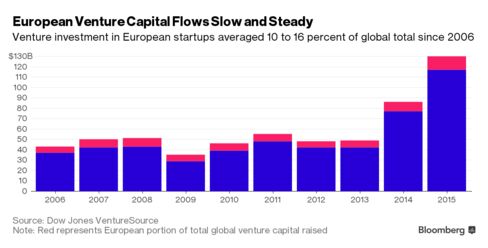 European businesses have captured between 10 percent and 16 percent of total global venture capital annually since 2006, according to data from Dow Jones VentureSource. Although 2015 was a banner year — European startups secured $12.9 billion — it was still just 10 percent of the years global total. Of that amount, U.K. startups commanded just $4.5 billion, or 3.5 percent of the worlds total venture capital. Germany nabbed 1.9 percent, and France took in 1.3 percent, according to VentureSource.

Because Europe isnt a big recipient of venture capital dollars, Brexit is less of a threat to the industry. “Its a big deal geopolitically, but for venture-backed startups, and for venture capitalists, the impact for us is zero, zilch, nada,” said said Venky Ganesan, chair of the U.S. National Venture Capital Association and managing director at Menlo Ventures.

Saul Klein, a partner at London-based venture firm LocalGlobe, agreed that investors in U.K. tech companies are likely to stay the course. “If they were interested yesterday, they should be even more interested today, and if they are not, they were probably tourists anyway.”

Venture investors spend months or sometimes years getting to know founders before backing their startups. Bets are long-term, with the average return not happening for seven to 10 years. During that time, a lot happens: investors typically help teams build product, hire, market, and sell in a bid to outmaneuver the competition. All startups learn to adjust to new changes in fast-paced technology markets, or risk perishing. New regulations governing the role of U.K.-based startups may not arrive for at least two years — an eternity in the startup world.

“As early investors, we are used to dealing with uncertainty, and so are entrepreneurs. Their whole makeup is about assessing new risks,” said Neil Rimer, co-founder of Index Ventures, which has raised the most of any European fund so far this year at $550 million.

Rimer is based in Geneva. Index has backed gaming startup Helsinki-based Supercell Oy, payments company Adyen BV, in Amsterdam, and on-demand services including Paris-based BlaBlaCar, Just Eat and Deliveroo, both in London. He said he and his firm are still assessing how Brexit could affect their U.K.-based startups. Early stage companies are agile, Rimer said, and can relocate if need be while mature companies like Supercell and King Digital are global in nature and not overly dependent on the U.K.

“The ones I worry about are the middle ones that are dependent on the U.K. and arent nimble enough to do something about it over a two- to three-year period,” said Rimer.

Rimer and others said they expect Brexits primary impact will be on how companies recruit employees and scale operations. Although its still too early to say how that will change, investors will be watching those areas closely.

“We are just 96 hours in,” said Bob Ackerman, founder of Allegis Capital. “We are still determining what it means.”

While the impact is muted in the U.S., theres some anxiety in the European tech scene. Jeff Lynn, CEO of the crowdfunding platform Seedrs and co-founder of the U.K. tech advocacy group Coadec, said many entrepreneurs are concerned the referendum will make it harder to raise money and recruit employees. He said some startups had investments scrapped because of Brexit, with at least one company he wouldnt name having a “Brexit clause,” allowing the investors to back out after the U.K. vote. “The uncertainty is profound,” he said.

SoftTech VC partner Andy McLoughlin said Brexit could make it easier for other growing hubs like Berlin, Paris and Amsterdam to outshine London.

“This is an opportunity for them to step up,” he said.