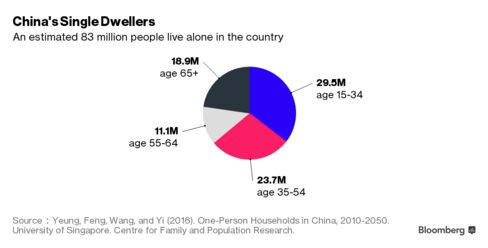 In her chic Beijing studio, 26-year-old Summer Liu relaxes on a sofa, admiring the pink vase she keeps full of fresh flowers. In the eastern city of Jining, Hu Jiying, 81, sits on an old bed thats scattered with clothes, towels and half a bag of snacks, worrying about the cost of her medicine.

What they have in common is that they live alone, two ends of a rapidly growing demographic that is breaking down Chinas traditional family structure and presenting the government with a social and environmental headache.

China had 66 million registered one-person homes in 2014, or 15 percent of all households, compared with 6 percent in 1990, according to government data. The actual number may be as many as 83 million — more than the population of Germany — and could rise to 132 million by 2050, according to Jean Yeung, director of the center for family and population research at the National University of Singapore.

“The prevalence will only increase in the next few decades due to continued aging, migration, and divorce,” Yeung said. “Some choose to live alone because they have more economic resources and prefer more time and space for themselves, others have no choice.”

Those forces are eating away at an economic structure based on family units that goes back centuries, part of the twin Confucian values of loyalty to the emperor and filial obedience known as Zhongxiao that Chairman Mao Zedong tried to destroy during the Cultural Revolution. Where Mao largely failed, economic growth is succeeding, boosting demand for power and consumer goods and putting an increasing strain on services for the elderly.

Statistics from developed countries suggests the trend in China has a long way to go. In neighboring Japan, more than 30 percent of households have only one occupant. In Norway and Finland the ratio is as high as 40 percent.

“This rapid increase in single-person households represents a fundamental shift at the very bottom of the Chinese social structure,” said Wang Feng, a professor of sociology at the University of California, Irvine. “Households, often with many members co-residing, have long been the most basic units to organize production and consumption, to socialize individuals, and to maintain networks of political power and social support.”

The breakdown of that structure began with the imposition of the one-child family rule which was only removed last year. When millions of migrants began leaving family homes in the past three decades to seek work in the cities, many left parents behind. Some 19 million people 65 years and older live alone now in China, and the number will more than double to 46 million by 2050, according to estimates of Yeung and her colleagues.

Hus 56-year-old daughter lives two hours away in another part of Shandong province and is a paraplegic, so can no longer visit. Her own poor health means she cant travel often and she hasnt seen her daughter since last summer. Her son also lives away and visits once a year, but is too poor to help out, Hu said.

“How can I not be lonely?” said Hu, who has difficulty breathing and spends much of her time watching television in her dingy flat. “I want someone to live here with me. She doesnt need to pay rent. I just need someone to be nearby, to be with me.”

Hu gets 600 yuan a month ($91) from the government agency of her late husband, who died maybe 17 years, maybe 18 years ago, and spends half of it on medicine.

Many elderly, especially in rural areas, dont have full health insurance or a pension. The government said it has expanded rural healthcare, encouraged private businesses to invest in retirement facilities and more than tripled the number of beds in nursing homes in the past five years. The nations top economic planning body allotted 10.8 billion yuan in that period to support the elderly.

More government subsidies will be needed. Only 9 percent of Chinas private nursing homes made a profit as of 2015.

At the other end of the age spectrum, young, middle-class people like Liu are moving out of their parents house before they get married as they can afford their own place.

At the last census in 2010, 36 percent of men and 22 percent of women aged 25 to 29 werent married, twice the level of 2000. In cities, the ratio for unmarried women is even higher at 30 percent, according to Wang at the University of California.

“Im thinking about one or two years before I meet someone and get married,” said Liu, who moved into her cozy 6,000-yuan-a-month flat a year ago. “I can do whatever I want living alone.”

Singles like Liu are driving the growth of new services, such as the gym where she works out in the evening, or smartphone app Ele.me, which delivers her single-portion dinners. The Alibaba-backed company, founded in 2009, is now worth $4.5 billion and employs more than 6,000 people to deliver meals in over 260 cities.

In between the young consumers and the elderly, theres another group swelling the ranks of solitary dwellers that rarely existed before: divorcees.

Chinas divorce rate almost tripled between 2002 and 2014, to 2.7 divorces per 1,000 people, according to the Ministry of Civil Affairs. Newspaper commentators have blamed the rise of social media and dating sites, increased financial independence of women, and regulations that allow quick and cheap divorces.

In 1985, when Deng Xiaoping was still fomenting Chinas market opening, the rate was only 0.4 divorces per 1,000 people.

Still, its the nations inexorable aging that is likely to contribute the largest share of single-occupant households, putting increasing stress on healthcare and social services.

“For every one step of yours, I need to take three,” says Ni Yuehua, 82, who takes more than an hour to go to and from her local supermarket, 80 meters away. She calculates the weights of the yogurt and vegetables in her small trolley, because she cant carry more than 5 kilos to her one-bedroom apartment on the second floor of a block in Beijing.

Nis husband passed away in 2002 and her older daughter died in 2006 from disease. She lived in the U.S. with her son, a computer scientist, until 2010, when he was shot and killed in a robbery. Her other child, a daughter, lives in Sydney but is almost blind. So Li lives alone, nursing her arthritic fingers and taking medicine each day for her diabetes and heart disease.

“Early morning is the most difficult time,” she said, wiping tears from behind her reading glasses with a checked handkerchief. “I have to turn on the radio so I can distract myself from those sad things.”

On the back of the door in the one-bedroom apartment that she used to share with her husband are signs in large, red characters: “Switch off the fire,” “switch off the water.”

Across the hall is another apartment, where her children grew up. She never goes into it any more. “Thats too tragic for me to even look at,” she says.

With assistance by Xiaoqing Pi