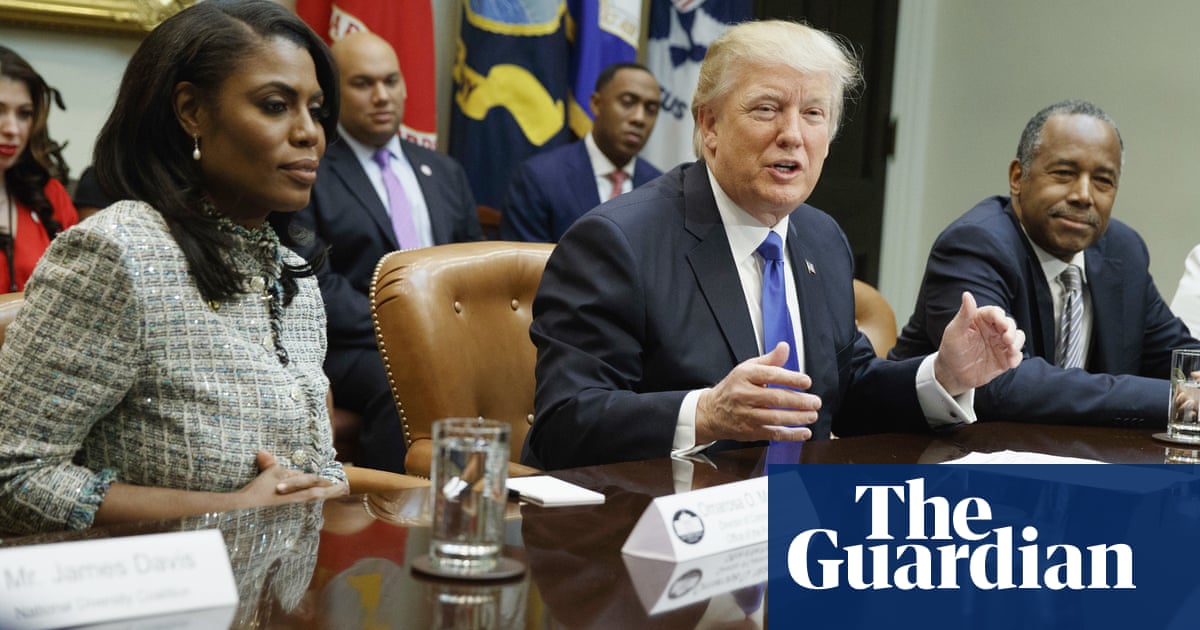 Omarosa Manigault Newman, whose association with Donald Trump goes back all the way to his days on reality TV, has displayed her flair for spectacle by publishing a scathing insider’s account of his White House.

Her book, Unhinged, characterizes the US president as a bigot, sexist and racist who has been caught on mic using the N-word “multiple times”. This is the verdict of the woman who was his director of African American outreach during the 2016 presidential election, then the most senior African American on his staff until her sudden departure last December.

Manigault Newman, who embraced the role “villain” on The Apprentice, said in 2015: “When you have a big reality TV star as the front-runner for the Republican nomination there is no way to separate it. This is the new reality.”

Her memoir offers a glimpse of a reality TV candidacy and presidency full of chaos, egos, internecine warfare and mendacity.

When the Guardian approached the White House for comment about Manigault Newman’s book on Thursday, there was no response. But on Friday, press secretary Sarah Sanders claimed: “This book is riddled with lies and false accusations”. She added: “It’s sad that a disgruntled former White House employee is trying to profit off these false attacks.”

There is more to come, however. Manigault Newman is due to appear on NBC’s Meet the Press on Sunday and then embark on a lengthy publicity tour that could further damage the man she once regarded as a mentor.

Inauguration day: the Bible or the Art of the Deal?

Barack Obama was sworn in using Bibles that belonged to Abraham Lincoln and Martin Luther King Jr. But the use of a Bible, though common, is not compulsory for US presidents taking the oath of office. Manigault Newman claims Trump, who loves to upend Washington norms, considered being sworn in on his own bestselling business book.

Manigault Newman, an ordained minister, writes: “He asked me, ‘Omarosa, what do you think about me getting sworn in on The Art of the Deal?’ – his own book about success in business.

“’Yeah. The Art of the Deal is a bestseller! It’s the greatest business book of all time. It’s how I’m going to make great deals for the country. Just think how many copies I’d sell – maybe a commemorative inauguration copy?!’

Manigault Newman says she told him to forget the idea and not mention it to anyone else. She adds: “We laughed. He wanted me to believe he was kidding.”

Trump, who has deep support from Christian evangelicals, has “no knowledge” of the Bible, the author adds. “It might as well be a paper brick to him.”

On Donald Trump’s relationship with his daughter Ivanka

The US president’s favorite child is not difficult to guess. In 2006 he infamously said: “I’ve said if Ivanka weren’t my daughter, perhaps I’d be dating her. Isn’t that terrible?”

Manigault Newman got to see the relationship up close.

“For as long as I’d known Trump, I’d observed the way he hugs, touches, and kisses Ivanka; the way she calls him Daddy. In my opinion, based on my observations, their relationship goes up to the line of appropriate father/daughter behavior and jumps right over it,” she writes.

Trump “covets” his daughter, the author continues, while she exploits her status as “Daddy’s little girl” to get her way. Contrary to her public image, Ivanka has the “worst potty mouth”, Manigault Newman writes.

The author recalls an incident in which musician Gene Simmons, a friend of Trump, talked about Ivanka in a room full of people, “leering openly at her breasts” and declaring: “She’s a very, very sexy, desirable young woman who I’m looking forward to getting to know much better if you know what I mean, with all due respect.” Trump egged him on, the book says.

Manigault Newman also recalls Ivanka’s speech at the 2016 Republican National Convention, after which Trump placed his hands low on her hips. “I thought, ‘Why don’t the two of you cut it out?’”

David Pecker, longtime chief executive of American Media Inc, which includes the tabloid the National Enquirer, is under federal investigation for an alleged “catch and kill” – buying up a story and then burying it – with regard to Karen McDougal, a former Playboy model with whom Trump allegedly had an affair.

Manigault Newman has a Pecker story of her own. After her brother Jack was murdered in October 2011, she spoke at his funeral, not realising that the National Enquirer had sent a reporter, “a black woman who pretended to be a mourner”, who took words from Manigault Newman’s eulogy, turned them into an article and billed it as an “exclusive interview”.

She hired lawyers and planned to sue, but then got a call from Trump. According to her book, he told her: “Omarosa, you’ve got to drop this lawsuit against the Enquirer. David Pecker is my close friend. I’ve spoken with him, and he’s willing to work with you. What do you want?”

Trump negotiated a deal that included a settlement and job for Manigault Newman as west coast editor of American Media, Inc. Having studied journalism at university, she was attracted by the promise of travel, an office and a staff of photographers and reporters – and by doing her old mentor a favor. But she expresses regret.

“Now, when I look at things, I’m stunned that I was involved in this kind of shady dealing. But I’d been in the Trump cult for nearly a decade, and by then I was all in.”

And when she left the White House, Manigault Newman says, she made a different choice. Trump’s daughter-in-law, Lara Trump, offered her $15,000 a month to work on his 2020 re-election campaign, but with a contract forbidding her to ever talk about the Trump family. “I declined the offer. I was done with Trumpworld.”

Is Fox News running the country?

There was collusion in the 2016 election – but it was between the Trump campaign and Fox News. Much has been written about their symbiotic relationship. The president gives most of his interviews to the conservative networks and his tweets are often prompted by items he has watched on Fox & Friends.

Manigault Newman provides further evidence dating back to the 2016 election campaign. “A select Trump campaign mailing list received daily emails directly from a producer at Fox News that summarized the news of the day, broke down talking points and spin suggestions, and offer resources,” she writes.

A typical @foxnews.com email, she explains, would have a complete transcript of a recent Hillary Clinton speech, a second-by-second breakdown and analysis, “with specific suggestions for how to respond to her, line by line”.

Daily communications between the White House and Fox News continue to the present day and Trump does get talking points from the network, she adds. “Individuals at Fox News are also speaking directly to this team of advisers every single day. The channel’s channels are wide open.”

All the president’s men (and women)

Manigault Newman suggests that the president’s views of his own staff are often less than flattering. When Ivanka Trump first started dating Jared Kushner, she asked her father what he thought of Kushner. She writes: “’He seems a little sweet to me,’ he said, using his phrasing for ‘gay.’”

The president calls Betsy DeVos, the education secretary, “Ditzy DeVos” and Jeff Sessions, the attorney general, “Benjamin Button” behind their backs, according to the memoir.

Manigault Newman describes White House communications director Hope Hicks as “out of her depth”, hence her unwillingness to give interviews, but explains: “Trump has an affinity for pretty women”.

She also recalls how, when chief stategist Steve Bannon starred on the cover of Time magazine under the headline “The Great Manipulator”, the president raged at Bannon in a room full of people: “He thinks he’s a manipulator? Thinks he’s so f***ing smart? He thinks he can manipulate me? An idiot! An asshole!”

One of the more intriguing characters in the book is the vice-president, Mike Pence. There are several references to how he might well be a president in waiting, at least in the eyes of his own staff. But for now he is loyal to Trump with a religious zeal.

Recalling the bitterly divisive travel ban on several Muslim majority countries, Manigault Newman writes: “In these meetings, Mike Pence defended Trump, saying, ‘God is telling me to support the president. God is telling me I’m here to serve.’ He was being directed by a higher deity to agree with Trump no matter what.”

She also describes how Pence “gazed worshipfully” at the back of Trump’s head for a full hour during a speech to Congress. “Every one in the senior staff thought that Mike Pence was a Stepford Veep. It seems obvious that he was too perfect to be genuine.”