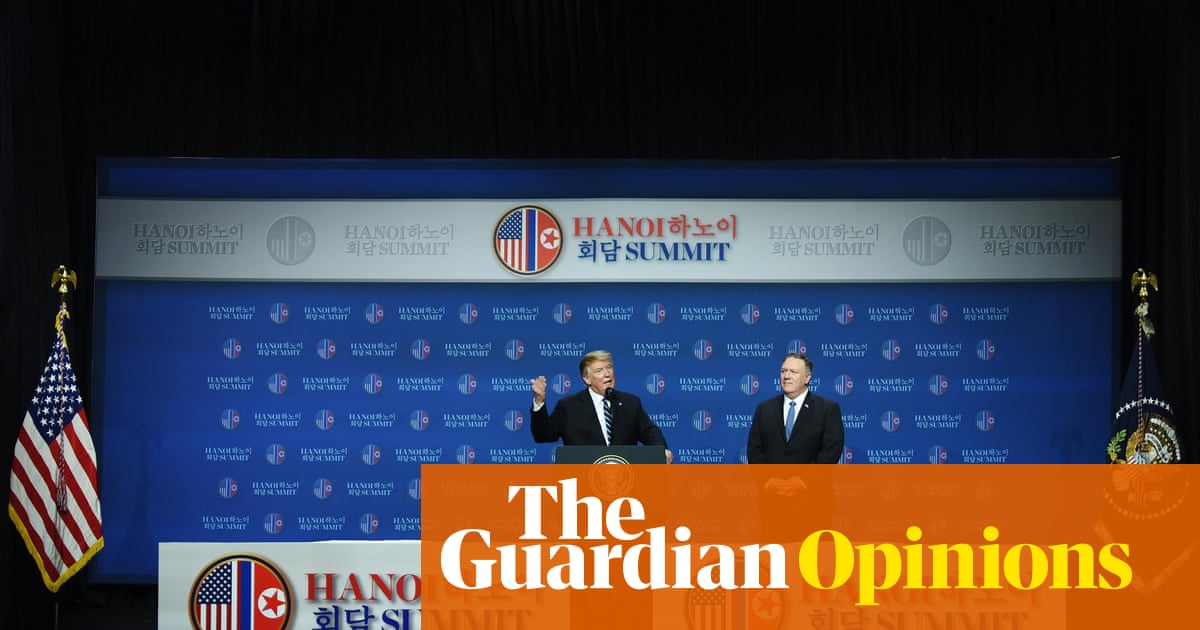 Donald Trump came away from his meeting in Hanoi with North Korean leader Kim Jong-un with at least one thing: material for a new book, The Art of No Deal.

The breakdown in talks in Hanoi reaffirms what we’ve known for almost a year – this process has been diplomatic amateur hour. Trump has repeatedly undermined his own negotiating position by making clear that he already sees his diplomacy with North Korea as a success. After the first summit with Kim in Singapore in 2018 Trump falsely claimed that “there is no longer a Nuclear Threat from North Korea”. Days before the Hanoi summit, Trump said that he didn’t need Kim to make any more concessions – “as long as there’s no testing [of nuclear weapons and missiles], we’re happy”.

It’s no wonder that Kim wasn’t willing to give more in Hanoi – Trump has been telling him for months that the status quo is just fine.

It’s sad to see an American president embarrassed by the world’s most ruthless dictator, but that’s what the world just saw in Hanoi. Beyond the lack of substantive progress on the nuclear weapons program, Trump continued the disgusting spectacle of standing up for a tyrant who has been found by a United Nations commission to have committed “crimes against humanity”. In the span of hours in Hanoi Trump called Kim a “friend”, defended Kim from blame for the murder of Otto Warmbier, and yet again disputed US intelligence analysis that North Korea continues building more weapons.

And yet, diplomacy is still the way forward because there is no other option, and real diplomacy can yield impressive results – just look at the Iran deal (which, of course, stopped Iran’s nuclear weapons program and didn’t require one leader-to-leader meeting). More sanctions and a return to “maximum pressure” will not help. And we must all be wary of the immense danger of a return to the “fire and fury” talk.

Despite the embarrassment in Hanoi, perhaps walking away from this meeting will create some of the diplomatic leverage that Trump has repeatedly squandered over the last year and force Kim to believe he needs to make more concessions in order to keep the process going. Trump has consistently acted as though all he cares about is the appearance of a “win” on North Korea, and so if there was only a bad deal on the table and Trump rejected it, that’s a good thing.

If there is to be any hope for progress, Trump and his team must learn from the mistakes of the last year. And since it seems difficult for Trump himself to learn from past mistakes, it is even more important that the next steps not include Trump’s personal diplomacy. While it’s difficult to believe that Trump would keep quiet on any subject, Trump’s staff should hope that the president doesn’t get asked any more questions in public about North Korea and doesn’t tweet anymore about it – each time Trump says something on North Korea, he gives away a little more leverage.

The United States must now rigorously test North Korea’s intentions. Secretary of State Mike Pompeo and US special envoy for North Korea Steve Biegun must ask for immediate talks with their North Korean counterparts to follow up on Hanoi. North Korea has been evading these detailed negotiations for much of the last year until just before the summit, but it’s not for lack of capacity – the North Koreans negotiated and secured a detailed, significant agreement with South Korea last September to reduce military tensions. Now that the leaders have given their repeated blessings to diplomacy, the North Koreans must allow their negotiators to actually begin negotiating. The North Koreans must be told that there will be no more summits until working level negotiations make progress.

At the same time, the United States must ensure that it does not have an “all or nothing” approach to the negotiations and be willing to make incremental progress on the nuclear front. The United States must evolve its negotiating position in a reasonable way to test what North Korea is willing to do. Trump’s comments after the summit indicate that the main stumbling block was the trade of sanctions relief for a freeze or dismantling of nuclear facilities. Perhaps there was a deal ready to go and either Trump or Kim pushed for more at the last minute and walked away when they didn’t get what they wanted. Perhaps the two sides had misread what the other was willing to do.

Whatever the precise stumbling blocks were in Hanoi, these are the issues that should be hashed out between the working-level negotiators. If they can’t agree, they should seek approval for new negotiating positions from their respective leaders before they get to a summit meeting. That’s how good negotiating works.

But until North Korea is ready to show its willingness to freeze or roll back at least part of its nuclear program, there should be no more summits. No more Trump parading around with Kim saying it’s an “honor” to meet and defending Kim’s human rights abuses. No more amateur hour.