We trust our friends far more than any institution a vulnerability Cambridge Analytica exploited via Facebook. But we wont be so trusting again 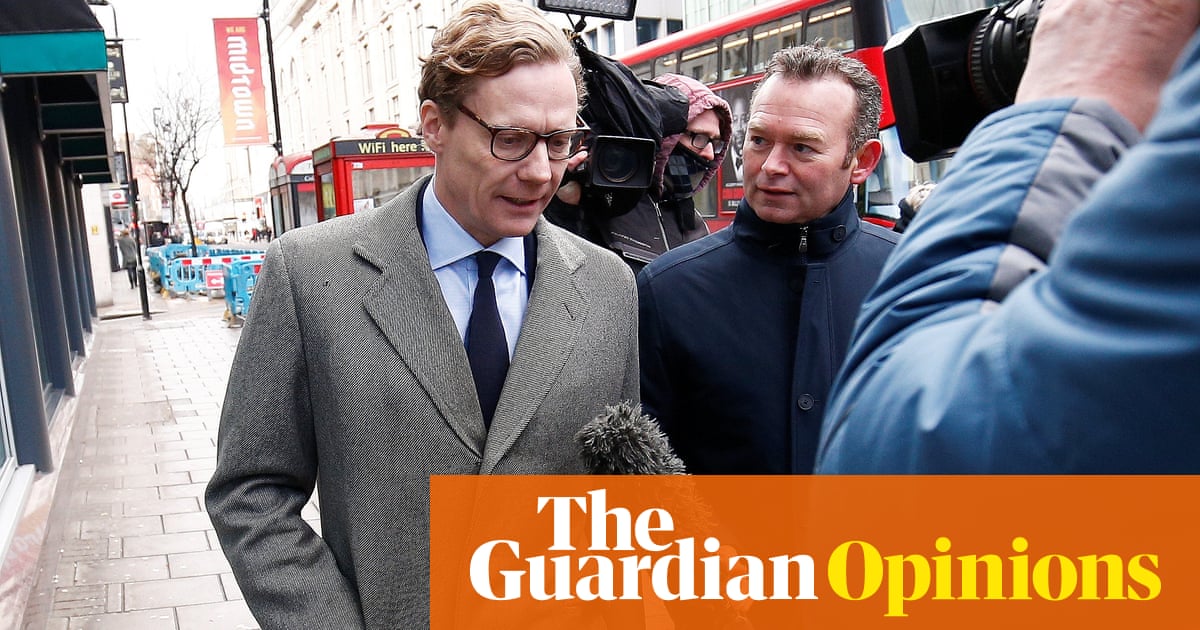 How on earth did Donald Trump win the presidency when he lost the popular vote by such historic margins?

To put this in perspective: John Kerry lost the popular vote in 2004 by almost the same number of votes as Donald Trump 12 years later.

This is not a small question, to be noodled over by disgruntled Democrats and political scientists. It lies at the heart of the likely impeachment of Trump himself, and it will dominate at least the next two US elections.

The answer is fundamental to our democratic culture of fair elections, the rule of law, the role of technology and the free media.

Now there are any numbers of factors that could have swung 40,000 votes in three states – Michigan, Wisconsin and Pennsylvania – which created the catastrophic fluke of the Trump presidency in the electoral college.

But there are no factors as large and persistent as a weaponized Facebook – the trusted and entirely unregulated delivery vehicle for an astonishing amount of highly targeted disinformation.

Without Facebook, there would have been no Pizzagate, and the hacked DNC emails would have struggled to reach their intended audience. The strangely Russia-loving Green party would never have tallied enough votes to skew those three battleground states towards Trump.

All roads lead to Facebook and the small company that plundered its vast user data: Cambridge Analytica. Together the social network looks less like a group of friends and more like the Silk Road black market of arms and drugs dealers.

Thanks to the reporting of the Observer, the Guardian and Channel 4, we now know that Cambridge Analytica could happily arrange for a candidate to fall into a compromising scandal with a Ukraine prostitute or a bribery sting.

As the now-suspended CEO, Alexander Nix, put it so well: “It sounds a dreadful thing to say, but these are things that don’t necessarily need to be true as long as they’re believed.”

In his snooty British accent, Nix is only saying – and converting into highly effective digital marketing – what Trump has long believed: lies don’t matter as long as they’re believed.

So while it might seem grandiose for Nix to boast that he played a central role in getting Trump elected, he also identifies several key truths that Trump supporters may refuse to believe.

First, the use of posts from fake activist groups that blur the lines between a campaign and outside groups. “This stuff infiltrates the online community, but with no branding, so it’s unattributable, untrackable,” Nix helpfully explained to undercover reporters.

Election laws will surely change as a result of Nix’s bragging and Facebook’s arrogant and inept response to this snowballing scandal. Nobody could get away with such brazenly political manipulation in TV ads. Why should they do so on Facebook or any other part of the web?

Cambridge Analytica also says their data “informed all the strategy” of the Trump campaign, including use of the “Crooked Hillary” slur that Trump still deploys to this day.

At this point, lots of Trump supporters – and many political pundits – like to say that nobody could be this powerful. No single firm could have exerted this much influence.

But that ignores the simple premise that has taken Facebook to such epic heights until now: that we trust our friends as a source of information far more than we have trusted traditional media and other institutions.

The Trump campaign – aided and abetted by Russian hackers and trolls, conservative billionaires, and the brainiacs of firms like Cambridge Analytica – drove its disinformation through the people we like to trust: our friends.

The evil geniuses of Cambridge Analytica were, as Channel 4 has shown, not nearly the geniuses they thought they were. Seriously, guys: when your company is registered in Delaware, you should probably realize that you come under US jurisdiction.

Besides, we now know that many firms hoovered up Facebook’s data and the social media giant didn’t care.

The end is surely nigh for Cambridge Analytica, and its key executives and investors can expect subpoenas in the near future. If the Democrats win back the House this year, we can expect new laws to prevent unattributable, untrackable political ads on digital platforms in time for the election that will decide Trump’s fate.

But before we reach that point, Facebook’s future is already in serious doubt. It is now a polluted space, where you have no idea if your friends are real, if their posts are disinformation, if the ads are legal, and if your user data is safe. You may still trust your friends, but you won’t trust what they post on Facebook.

Advertising dollars will bleed away, removing the only thing Facebook really cares about. Developers will drift away because they won’t want to work for a polluted brand. And the regulators will start interfering with new product launches and new takeover targets.

If that sounds ridiculous, cast your mind back to the almighty position of Microsoft almost two decades ago, when it ruled most of the computer screens, documents and emails we stared at all day. When the justice department challenged its monopoly power, Bill Gates, his executives and his lawyers dug in with every denial and shred of outrage they could muster.

They lost their case but avoided the government’s attempts to break them up, after George W Bush “won” the disputed 2000 election. It didn’t much matter. Stripped of goodwill, with an eye on government regulation, Microsoft turned into the company it despised: IBM. Ubiquitous, boring and left behind. Only recently has Microsoft turned its reputation around, but it’s a far cry from its heyday in the late 1990s.

It was a remarkable coincidence that Gates himself turned to philanthropy at the same time, rebuilding his reputation on a global scale among people who needed his extraordinary wealth far more than he did.

All that has yet to play out for Mark Zuckerberg: the outraged denials, the public shaming, the polluted brand, the turn to philanthropy. Facebook is unlikely to collapse, but its decline has already begun.

He is only just discovering what everyone else learns when they come into Trump’s vortex, willingly or not. There is no escape when your reputation is circling the drain alongside him.