With cheap and fattening food everywhere, there has been a shape shift that means people do not recognise obesity when they see it in the mirror 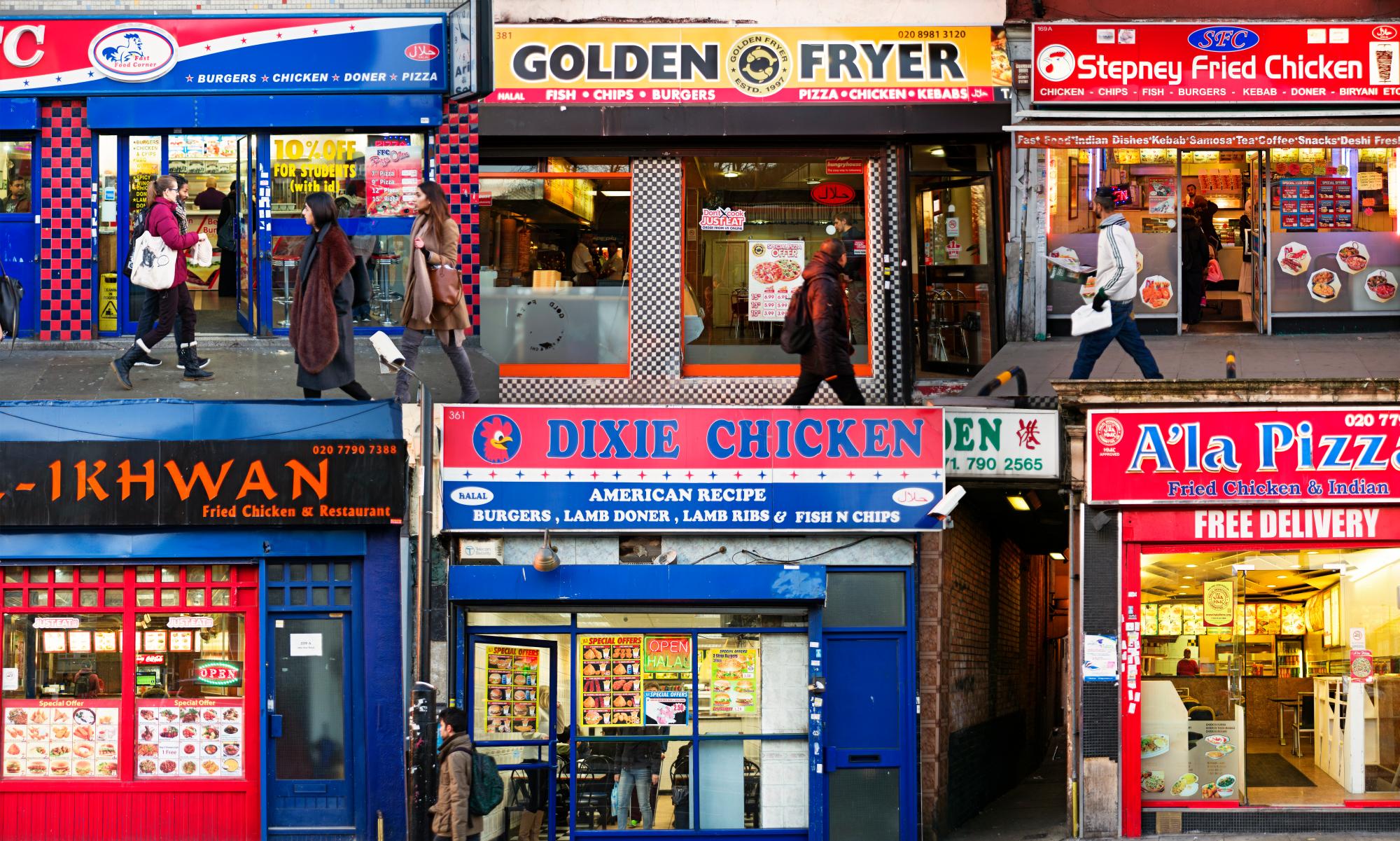 The Mile End Road in east London is awash with chicken shops not places to buy fresh poultry but takeaways where the oil is always bubbling and everything comes with chips. One piece of chicken in batter with fries and a can of full-sugar drink for £1.99. Two pieces for £2.79. There are utilitarian tables inside with red and white plastic cloths and large containers of ketchup, but many of the customers eat as they wander home in their school uniform.

In this London borough Tower Hamlets one in eight children starting primary school are obese, and that doubles to more than one in four when they leave, at age 11. The borough has the fifth-highest rate of child obesity in London and the sixth in the country.

Sir Sam Everington, a GP, deplores the chicken shop mile that begins just a short walk from his innovative Bromley-by-Bow health centre, where social and psychological problems are taken as seriously as the diseases that bring people in. There are all sorts of reasons why people become obese, but the 42 chicken shops per secondary school in the borough are definitely among them.

The child obesity figures are a disaster, according to Everington, who chairs the boroughs clinical commissioning group. Its a spectrum of malnutrition, he says over coffee in the pleasant cafe that is an integral part of the health centre. My assumption is that all my children are malnourished.

One of the worlds most affluent cities has children with problems we assume do not exist outside the developing world. Malnutrition is not just about starvation. And apart from the real danger that obesity will lead to heart disease, stroke and cancer in later life, the diet children are eating also leads to vitamin deficiencies and mouths full of rotten teeth.

For the NHS, this scenario is devastating. Even now, type 2 diabetes which is linked to obesity consumes nearly a 10th of the annual budget. There is some evidence that the rise in obesity in children nationally may have hit a plateau, but it is stabilising, not dropping. And weight particularly in adults but also in children is very hard to shift, thanks to our inbuilt biological defences. Our metabolism dramatically slows weight loss after a couple of months to prevent us starving to death.

Britain spends more on obesity-related healthcare costs than on the police, the fire service, prisons and the criminal justice system combined, he says. Obesity-related conditions cost the NHS £6bn a year and rising. The diabetes bill is £9bn more. Its not just the wellbeing of people in this country and our children, but its also the sustainability of the NHS itself, Stevens said.

The NHS has to prevent people becoming ill in the first place. Stevens recently pledged a price rise for sugary drinks sold on NHS premises to staff and patients. Its a start, but theres a very long way to go.

Around the country, only the type of takeaway varies, from fried chicken to fish in calorie-loaded batter to curries and burgers (all offered with sugary drinks). The problem is the same. A cultural shift has taken place over the past few decades. Cheap and fattening food is everywhere in pubs, restaurants, fast-food outlets and supermarkets. A shape shift has followed. Those living in areas where people are predominantly overweight no longer recognise obesity when it stares back at them from the mirror.

In the north-east of England, Sean Woodcock, a bariatric surgeon, deals with the consequences. There is a treatment that works, but it is drastic and not for everybody. Stomach-shrinking surgery forces those who go through it to eat less, because they feel full after tiny amounts of food. People shed vast amounts of weight, get out of their wheelchairs and regain their lives. But its a hard road to travel and Woodcock tells them so.

At a seminar in Monkseaton medical centre near Newcastle, where the Northumbria healthcare NHS foundation trust has taken over space for a dedicated bariatric outpatient unit, Woodcock looks around the semicircle of morbidly obese surgery candidates sitting on extra large chairs. He flicks up a slide of a twinkling cartoon fairy godmother. I ran out of fairy dust a long time ago, he tells them. There is no quick fix. It is hard work before the surgery because it is hard work after surgery. Motivated and informed patients get the best results.

Who has had a takeaway in the last week? he asks. A couple of hands go up. In the last month? Most hands are in the air. That has to end, he tells them. Who drinks fizzy pop? Everybody does. Some of my patients drink litres of the stuff every day, he says. My patients drink three or four litre-bottles of full strength [sugar-sweetened] and say: I dont know why I dont lose weight, Mr Woodcock.

Beer is an underestimated problem, too. John Smiths contains 250 calories a pint and Stella Artois 300. Ten pints is up to 2,500 or 3,000 calories and thats without going for your kebab, he tells them.

Nobody gets surgery without undertaking a weight management course, in which they are taught about diet and nutrition, fitness and exercise. They must demonstrate they are serious by losing a significant amount of weight thats where the avoidance of takeaways and fizzy pop comes in.

And they must also learn how to eat, post surgery. Some foods, such as bread and chewy meats, will not go down. They cannot drink and eat at the same time there must be at least half an hour between. Meals will be tiny. Anita Attala, specialist dietitian at the unit, says: You cant have the sweet things and you have to eat in a certain way and chew the food well. There is a risk of malnutrition and people must take vitamin supplements.

The staff, unlike much of the public, have infinite sympathy for the people they see. In most cases, there are psychological triggers behind the weight gain and many people have made huge efforts to lose weight. The vast majority are on a diet cycle, says Attala. They follow a commercial diet, lose weight, plateau and then pile it all on again. They start again and fail again. Commercial slimming organisations know it happens. Its why it is such a good business model. It is demoralising for people because they think its their failure. We had one patient who had been a slimmer of the year.

Claire Browell has been trying to lose weight since she was 18 Weight Watchers, Slimming World, commercial diets, pills you name it, she has done it. Aged 41, she was morbidly obese, with arthritis in her knees. She could not walk and was depressed. She has managed to lose more than 19kg (3 stone) on the educational weight management programme and Woodcock has just accepted her for surgery on 15 June. She is ecstatic.

She has taken to heart what Woodcock tells his patients that obesity-related diseases could cut their lifespan by 11 years. But Browell has not gone into this lightly. Surgery has its own risks. I have two children and it was a case of who is going to look after them if something happens to me? she says. If anything bad is going to happen, it normally happens to me. Who would look after my boys?

But eventually she came to realise her chances were worse without surgery. Who would look after the boys if she died from a stroke or heart attack as a result of her weight?

Stevens says bariatric surgery is not the answer for all 1.4 million people who are severely obese. It would cost £8.4bn similar to the pledged government increase in the NHS budget by 2021. It could bankrupt the health service. The answer, he says, has to lie upstream. We have to prevent obesity in the first place.

Everington agrees. It must start with babies and breastfeeding, which protects children against excessive weight gain. In schools, the GP says, I personally think health should be a compulsory part of the curriculum, ahead of maths and English. What is more important in life than health? I just want my kids to be happy and healthy. So all children should be taught cooking throughout their school career, and they need to run about much more. He cites the Stirling primary school that cut its obesity rate to zero by instituting a one-mile run or walk every day for all staff and pupils.

Outside school, we need safe cycle lanes (Tower Hamlets is building them), parks and restrictions on new takeaways. The existing ones cannot be closed. And, says Everington, GP practices, schools and other community institutions must all understand that they are well placed to help changeour ideas about the way we live and its impact on our health. A cultural shift set us off down this road. There needs to be another.

Sarah Boseley is the author of The Shape Were In: how junk food and diets are shortening our lives, published by Guardian Faber.