Were more likely to find solace by accepting reality rather than in positive thinking, says author Tim Lott 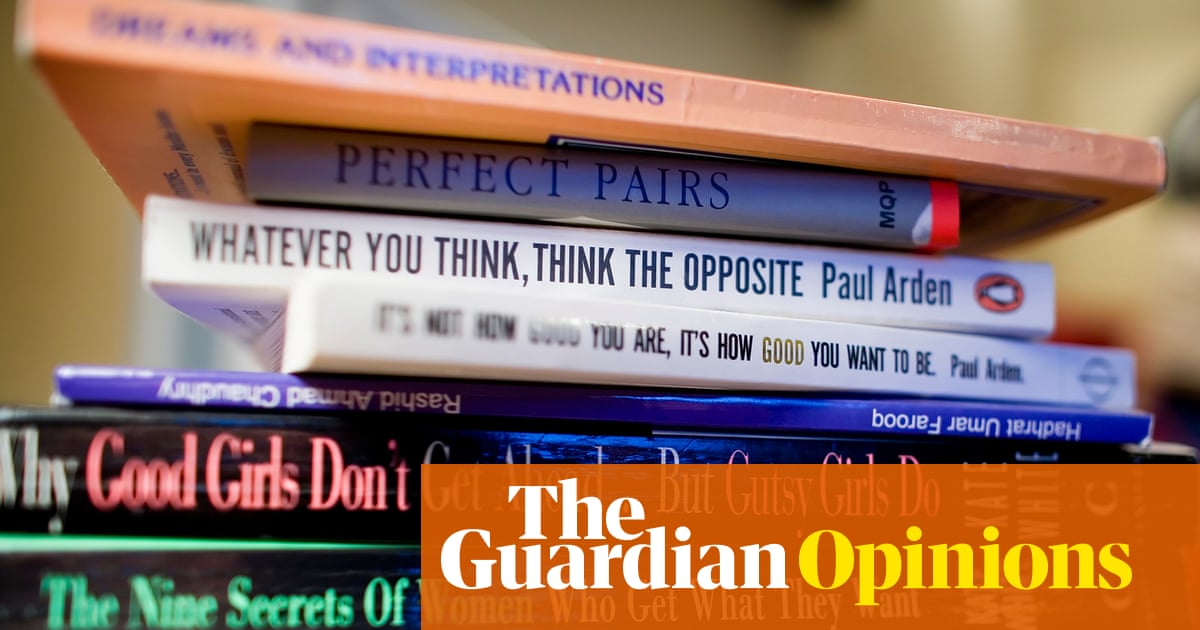 Booksellers have announced that sales of self-help books are at record levels. The cynics out there will sigh deeply in resignation, even though I suspect they don’t really have a clear idea of what a self-help book is (or could be). Then again, no one has much of an idea what a self-help book is. Is it popular psychology (such as Blink, or Daring Greatly)? Is it spirituality (The Power of Now, or A Course in Miracles)? Or a combination of both (The Road Less Travelled)?

Is it about “success” (The Seven Secrets of Successful People) or accumulating money (Mindful Money, or Think and Grow Rich)? Is Caitlin Moran’s How to Be a Woman self-help? Or the Essays of Montaigne?

Self-help – although I would prefer the term “self-curiosity” – is almost as broad a genre as fiction. Just as there are a lot of turkeys in literature, there are plenty in the self-help section, some of them remarkably successful despite – or because of – their idiocy. My personal nominations for the closest tosh-to-success correlation would include The Secret, You Can Heal Your Life and The Life-Changing Magic of Tidying Up – but that is narrowing down a very wide field.

In the minority are the intelligent and worthwhile books – but they can be found. I have enjoyed so-called pop psychology and spirituality books ever since I discovered Families and How to Survive Them by John Cleese and Robin Skynner in the 1980s, and Depression: The Way out of Your Prison by Dorothy Rowe at around the same time.

The Cleese book is a bit dated now, but Rowe’s set me off on a road that I am still following. She is what you might call a non-conforming Buddhist who introduced me to the writing of Alan Watts ( another non-conformer) whose The Meaning of Happiness and The Book have informed my life and worldview ever since.

The irony is that books of this particular stripe point you in a direction almost the opposite of most self-help books. Because, from How to Win Friends and Influence People through to The Power of Positive Thinking and Who Moved My Cheese?, “positive thinking” seems to be the unifying principle (although now partially supplanted by “mindfulness”).

The books I draw sustenance from contain the opposite wisdom. This isn’t negativity. It’s acceptance. Such thinking does not at first glance point you towards the destination of a happier life, which is probably why such tomes are far less popular than their bestselling peers. Yet these counter self-help books have a remarkable amount in common.

Most of them have Buddhism or Stoicism underpinning their thoughts. And they offer a different, and perhaps harder, road to happiness: not through effort, or willpower, or struggle with yourself, but through the forthright facing of facts that most of us prefer not to accept or think about.

Whether Seneca, or Nietzsche, Viktor Frankl or Rowe, Watts or Oliver Burkeman (The Antidote), or most recently Jordan B Peterson (12 Rules for Life), these thinkers all say much the same thing. Stop pretending. Get real.

It is not easy advice. Reality – now as ever – is unpopular, and for good reason. But the great thing about these self-help books is that, while giving sound advice, they are clear-eyed in acknowledging the truth: that happiness is not a given for anyone, there is no magic way of getting “it” – and that, crucially, pursuing it (or even believing in it), is one of the biggest obstacles to actually receiving it.

Such writers suggest the radical path to happiness comes from recognising the inevitability of unhappiness that comes as a result of the human birthright, that is, randomness, mortality, transitoriness, uncertainty and injustice. In other words, all the things we naturally shy away from and spend a huge amount of time and painful mental effort denying or trying not to think about.

Peterson perhaps puts it too strongly to say “life is catastrophe”, and the Buddha is out of date with “life is suffering”. Such strong medicine is understandably hard to take for many people in the comfortable and pleasure-seeking west. And despite what both Peterson and the Buddha say, not everyone suffers all that much.

Some people are just born happy or are lucky, or both, and are either incapable of feeling, or fortunate enough to never to have felt, a great deal in the way of pain or trauma. They are the people who never buy self-help books. But such individuals, I would suggest (although I can’t prove it), are the exception rather than the rule. The rest of us are simply pretending, to ourselves and to others, in order not to feel like failures.

But unhappiness is not failure. It is not pessimistic or morbid to say, for most of us, that life can be hard and that conflict is intrinsic to being and that mortality shadows our waking hours.

In fact it is life-affirming – because once you stop displacing these fears into everyday neuroses, life becomes tranquil, even when it is painful. And during those difficult times of loss and pain, to assert “this is the mixed package called life, and I embrace it in all its positive and negative aspects” shows real courage, rather than hiding in flickering, insubstantial fantasies of control, mysticism, virtue or wishful thinking.

That, as Dorothy Rowe says, is the real secret – that there is no secret.

• Tim Lott is a journalist and author