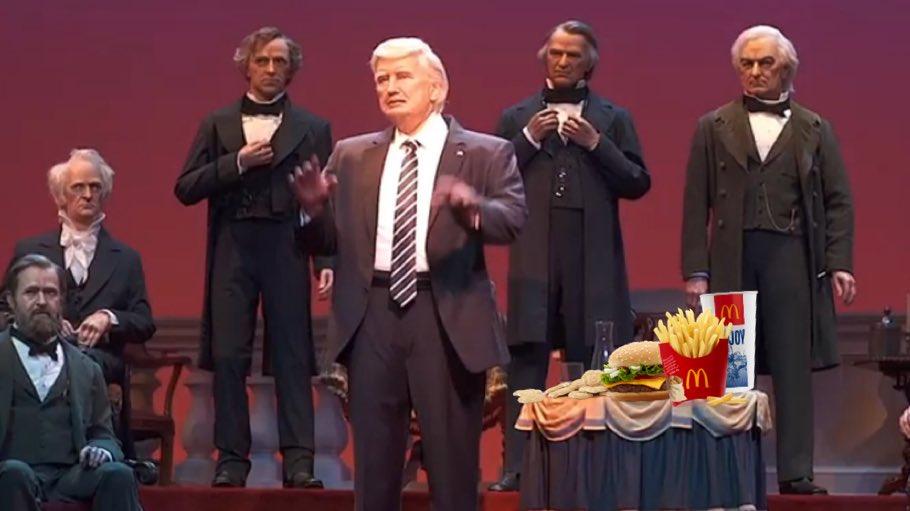 Trump may very well go down as the United States’ worst president (I say “may very well” because, now that he’s been elected, there’s no telling what horrors await us in future elections. Jenner 2028, anyone?), but he is also one of our most photoshoppable. If the state of the world a casual 5 days into 2018 has already got you upping your anxiety meds, these Trump photoshops will help ease your pain. Now excuse me while I attempt to lol my way through a nuclear apocalypse.

The president is already known for wearing giant ties that he keeps held together by tape (literally true), but Twitter user @TrumpsTies bravely asks, “What if Trump’s ties were…bigger?”

This is the result: 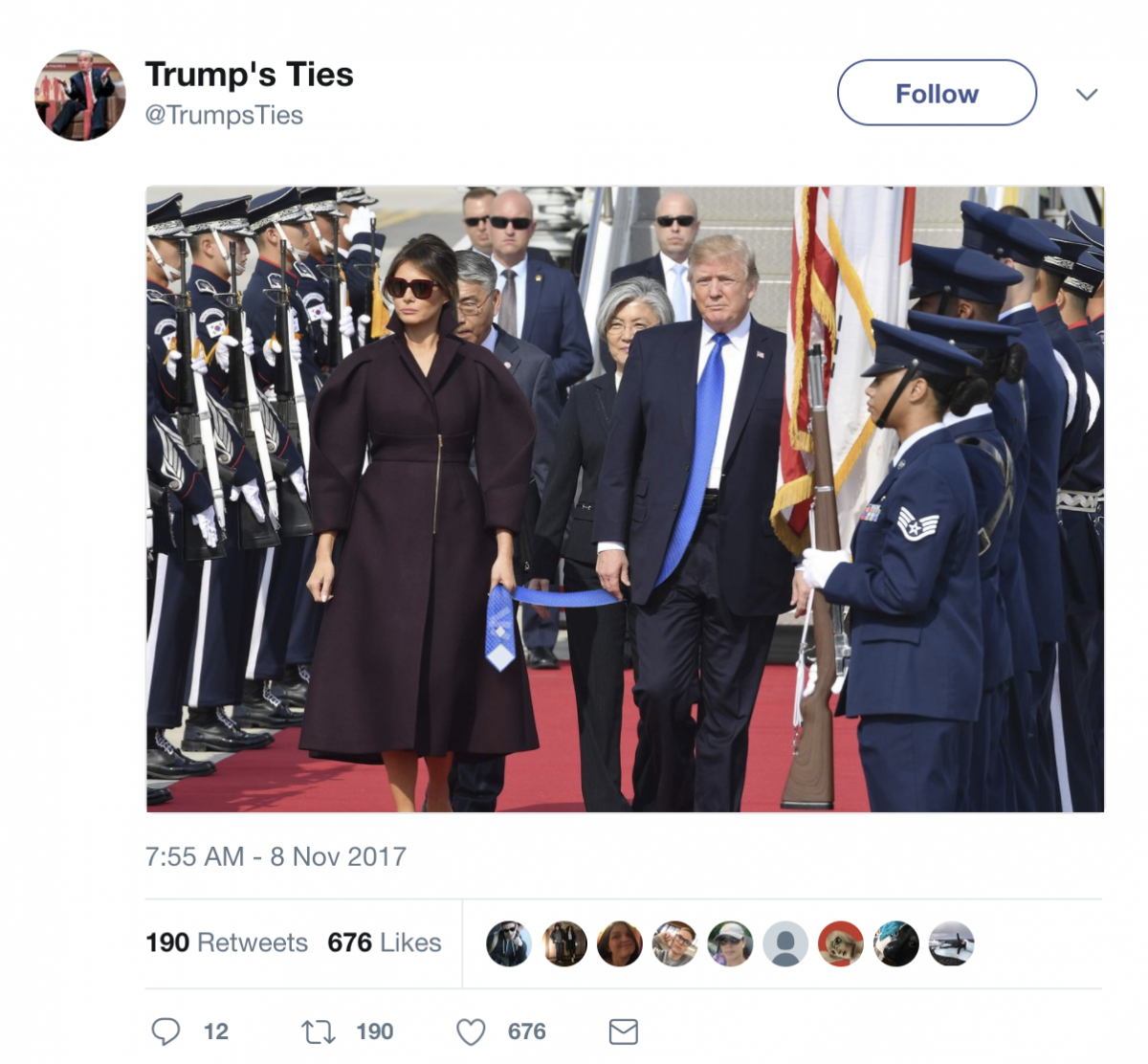 Hahaha yes. LMAOSHIAFTMHTNC (Laughing My Ass Off So Hard I Almost Forgot This Guy Has The Nuclear Codes).

Remember the time Trump made the mistake of becoming president drinking water live on air and we all realized he drinks water like a baby drinks from a bottle? Well here is him drinking from a bottle. God bless America (for as long as it exists).

Donald Trump is fat a very big man with a big nuclear button. This we all know. But what if he was tiny? Would it make him kind of cute? Apparently not: 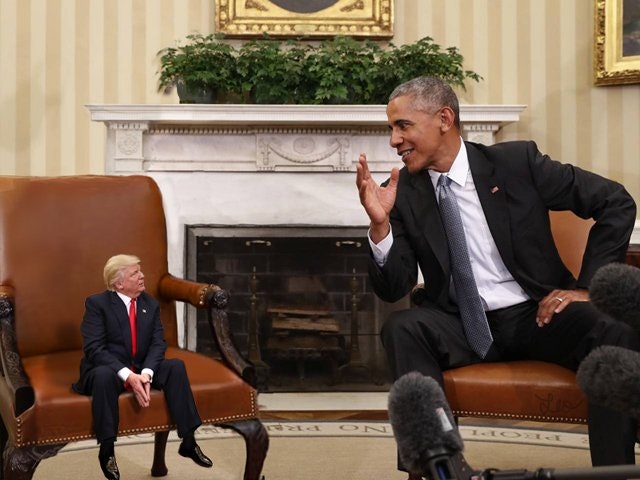 He’s so cute until he pops off and destroys the world. Kind of like a gremlin!

If you haven’t already gazed upon the horror that is Trump’s robot in Disney’s Hall Of Presidents, then brace yourself. Twitter user @bornmisable (Same.) got the brilliant/twisted idea to photoshop animatronic Trump into pictures of real Trump and the results are both hilarious and deeply troubling. Kind of like the news, TBH. 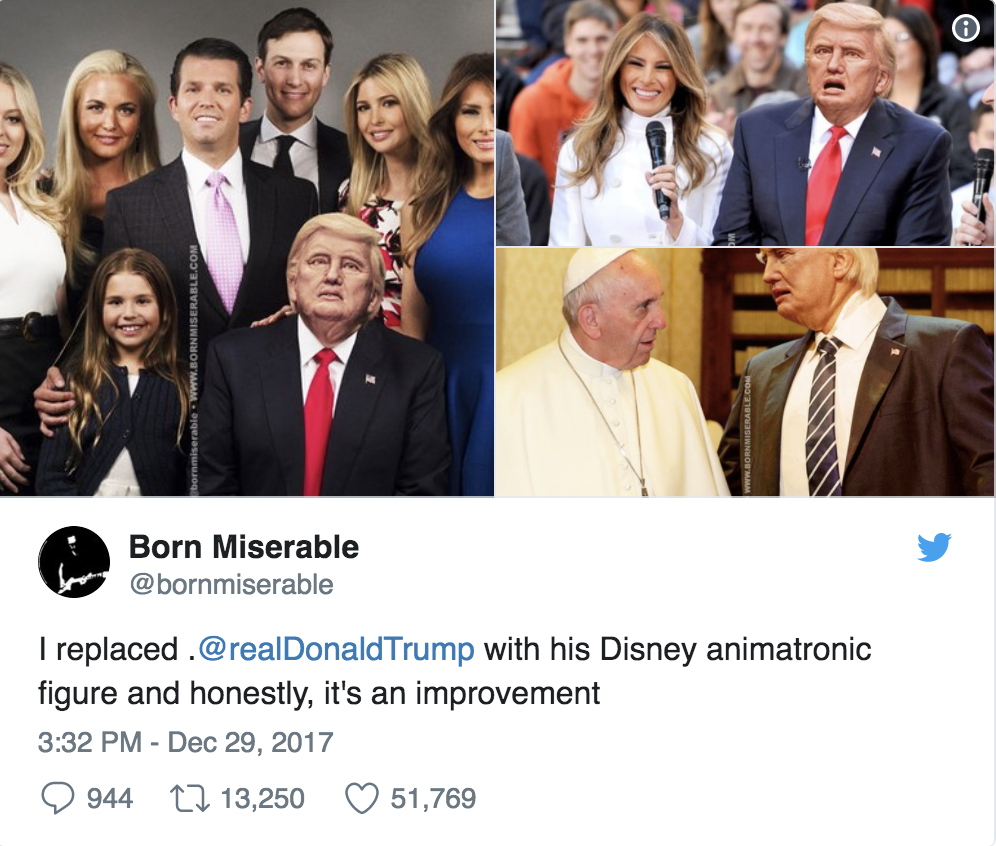 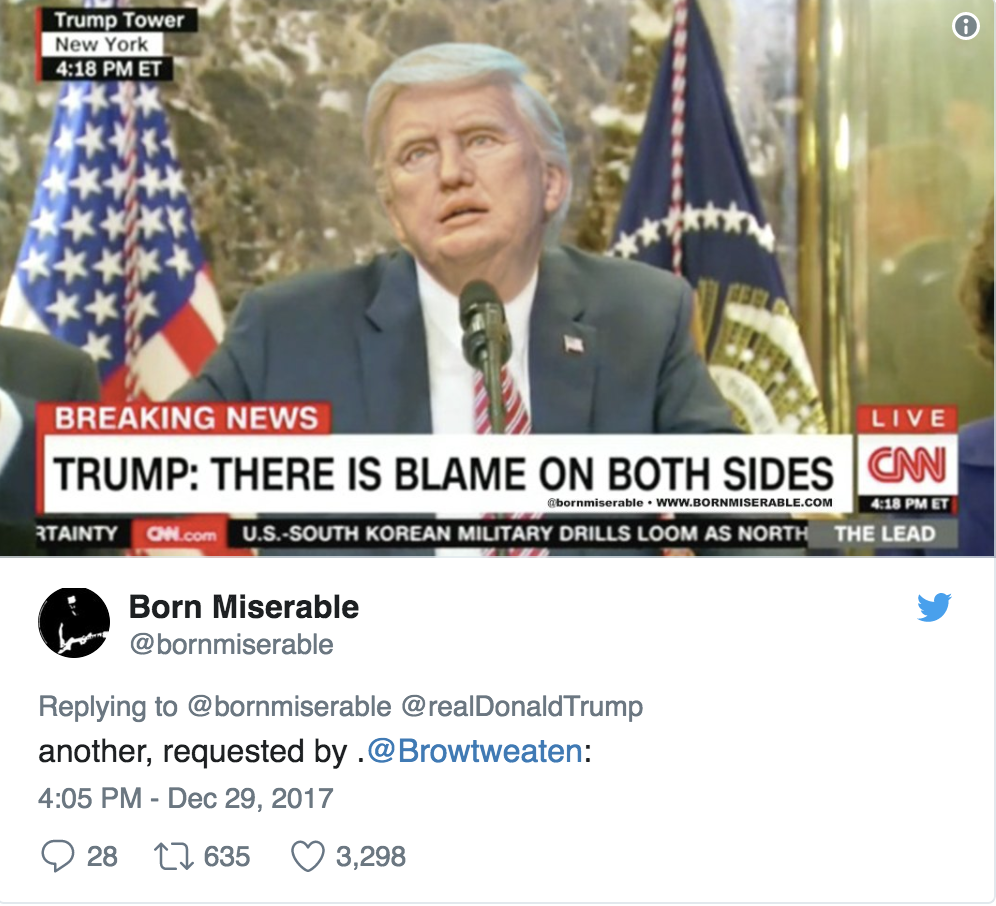 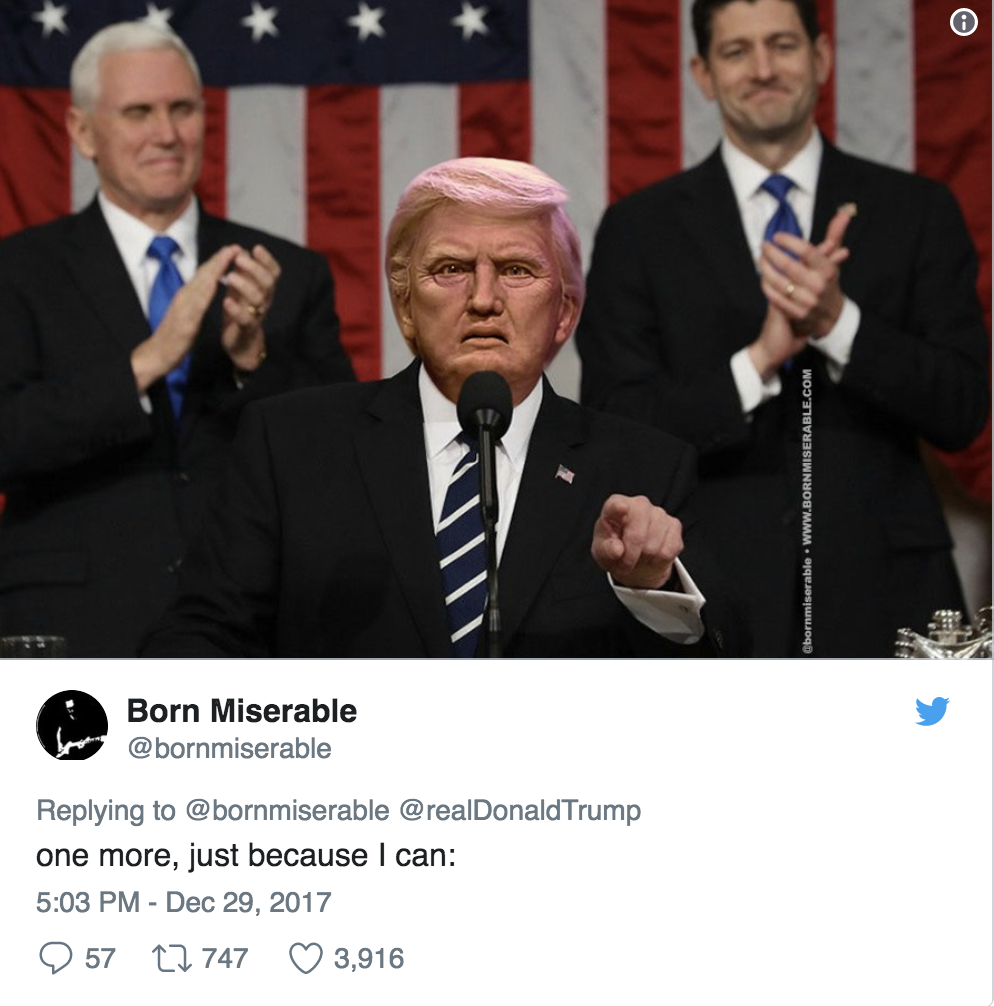 Anyone else feel like this robot might be a better president? And speaking of robot Trump, twitter user @sonicdork made Trump’s animatronic likeness a whole lot more accurate by including his favorite thing in the entire world: McDonald’s. 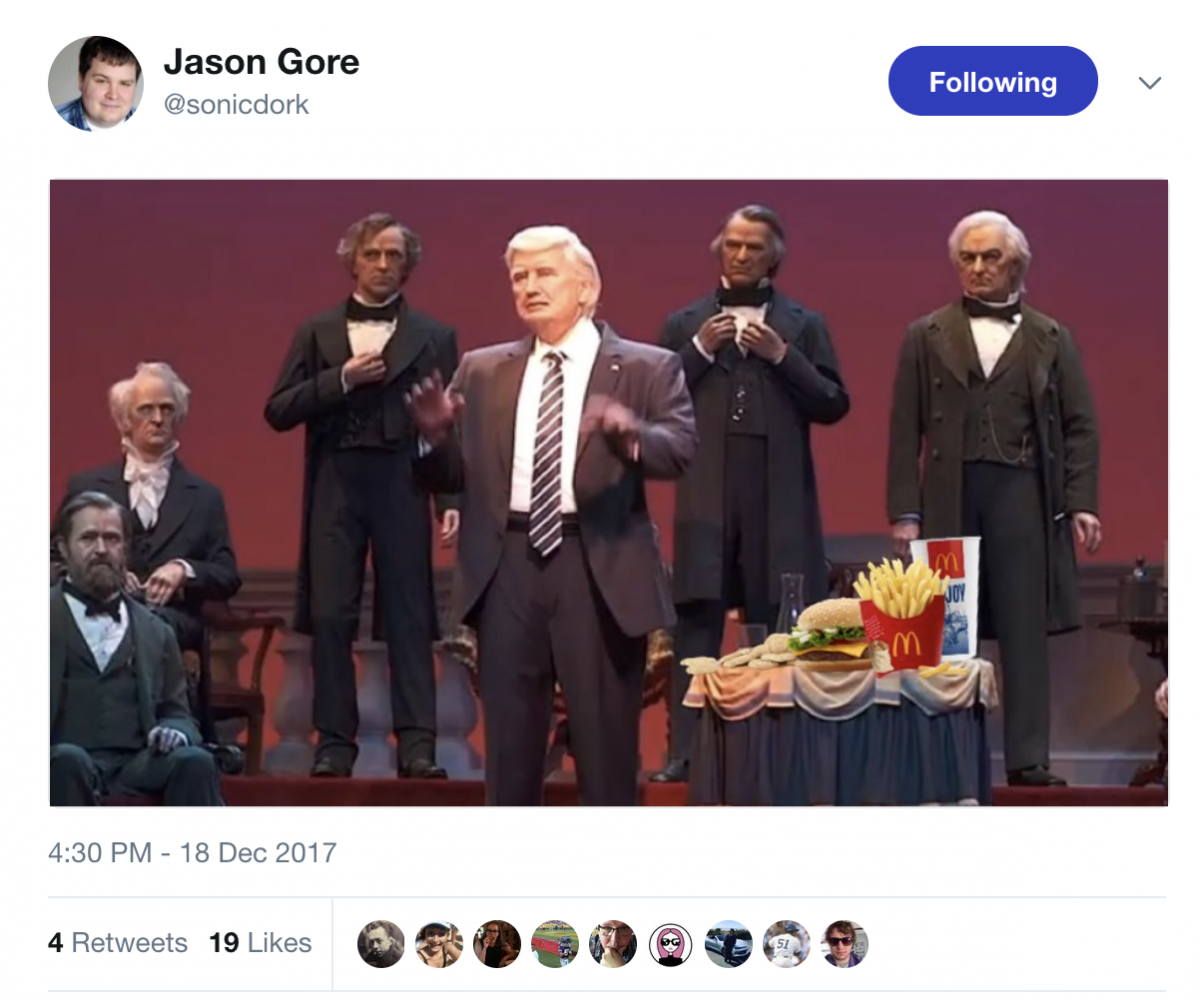 The nation stopped being shocked by Trump’s hair is long ago (I guess we’ve been distracted by the fact that a reality star is in charge of the full might of the U.S. military but whatever), but that doesn’t mean it is any less fucked. To illustrate this point, an anonymous hero created this image of the president if he <were a sane human being> just let himselve have normal 70-year-old man hair: 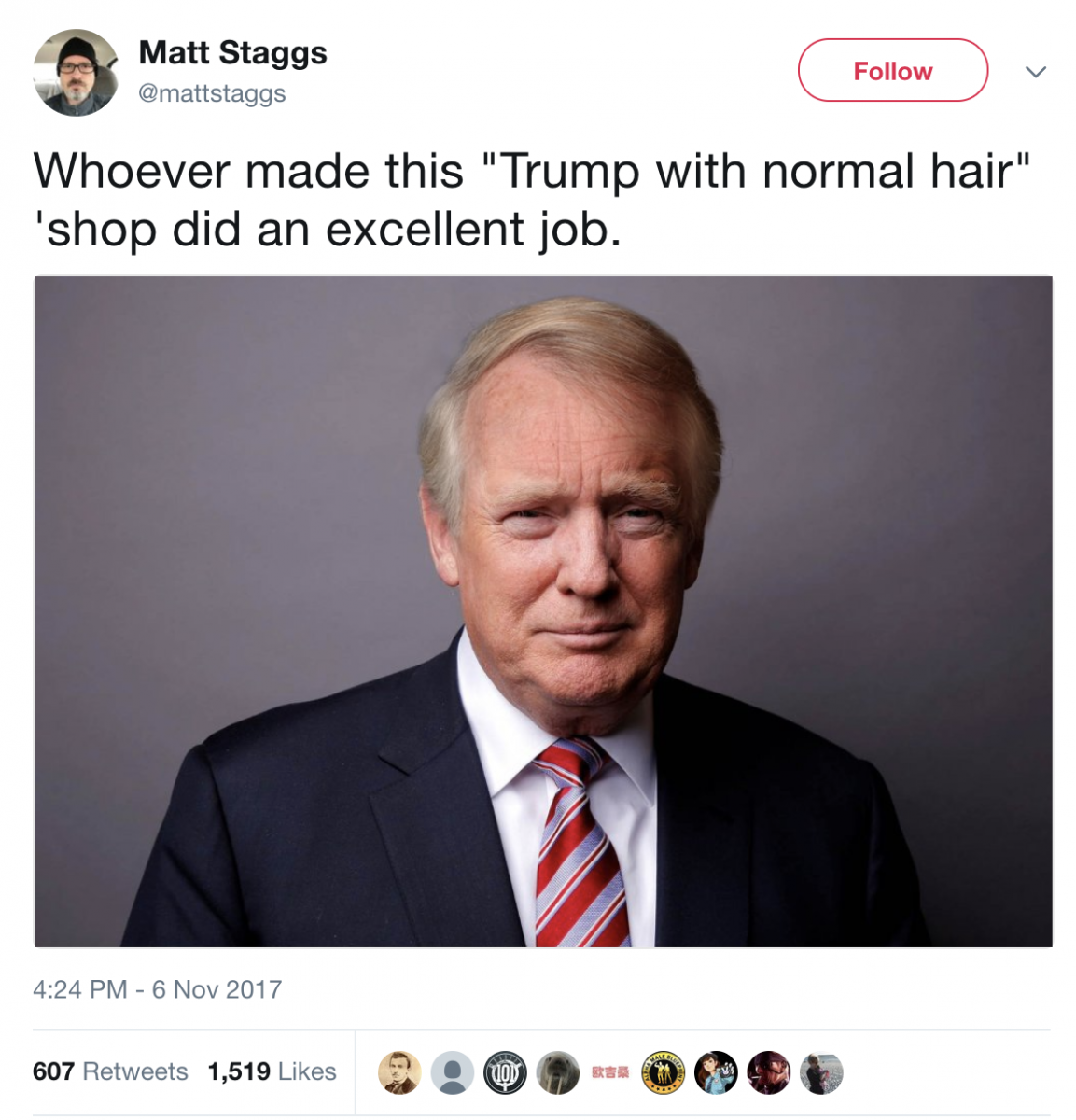 This last one is kind of sad, because it’s something the president forced an intern to make created himself. This cover hangs in one of his golf clubs. The only problem? It’s not real. This is like if Kim K hung her photoshopped Instagrams on the wall of her house. 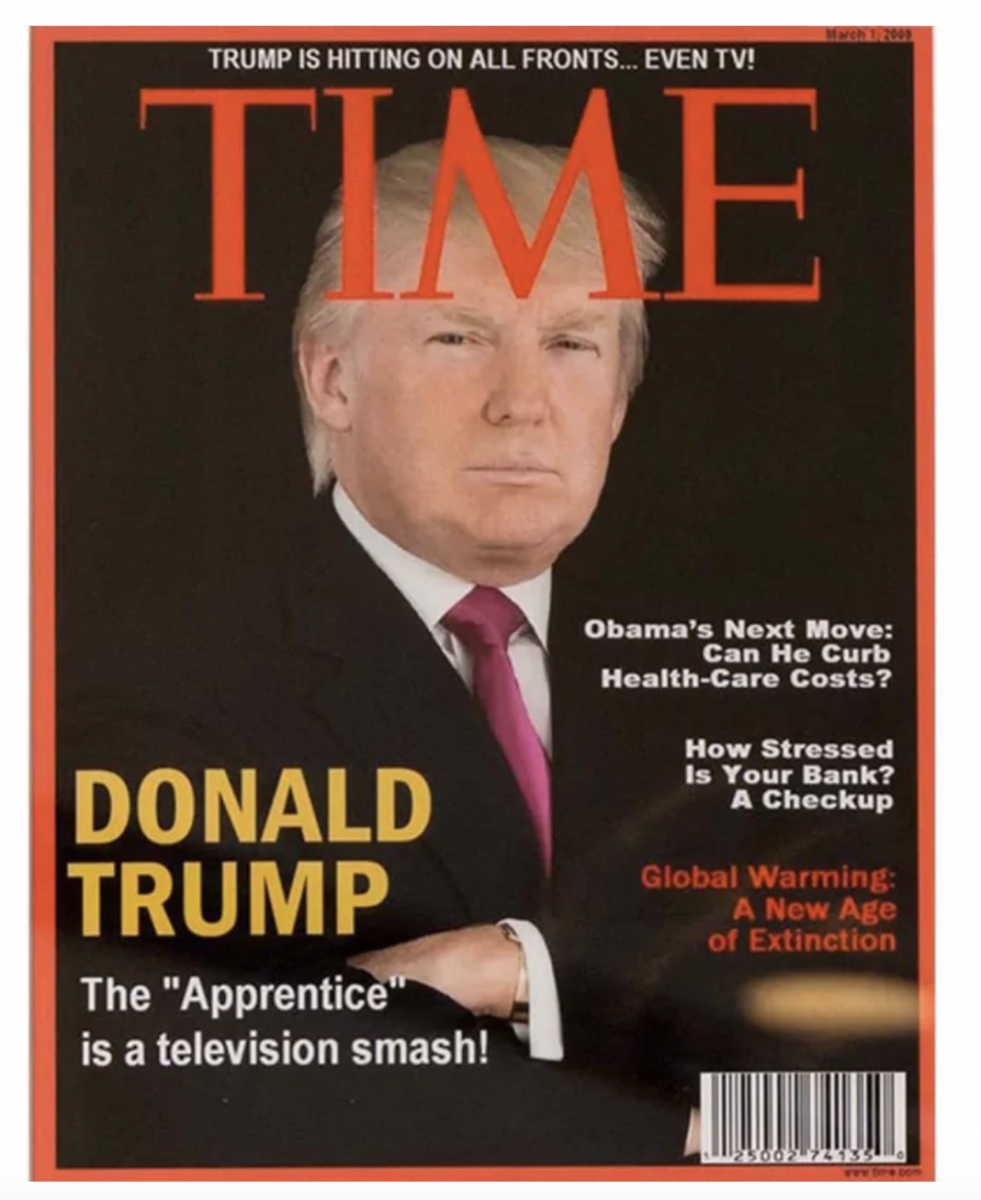 Wait…she probs actually does do that.

Heads up, you need to keep up with the news. It’s not cute anymore. That’s why we’ve created a 5x weekly newsletter called The ‘Sup that will explain all the news of the week in a hilarious af way. Because if we weren’t laughing, we’d be crying. Sign up for The ‘Sup now!

26 Actors Who Paid A Terrible Price For A Role

Why Colton Underwood And Rachel Lindsay Are Feuding | Betches

Everything I Wish I Knew About Freezing My Eggs | Betches

This Influencer Is Accusing Kylie Of Copying Her Naked Pic · Betches