Mothers Day is upon us which means its time for us to celebrate all the amazing mothers (both real and fictional) who taught us how to be real human people throughout the years. Its a time for breakfast in bed, last-minute flower orders, and grainy TBTs of you and your mom as a hot person in the 90s. But what about the mothers who dont deserve any of that shit? You know, the ones we watch and go, maybe I should get my tubes tied just in case? For as much as a mom can help you with literally every problem in the book, a mom also has the potential to fuck you up if she herself is fucked up. These TV moms make us look at our own moms and say, Youre psycho, but not that psycho. Here are the top 10 TV moms who make us appreciate our real-life moms all the more.

1. Kris Jenner (‘Keeping Up With The Kardashians’)

So yeah, Kris Jenner is like, a real life mom and not a fictional character, but if popping 5+ spin-off shows worth of reality stars out of your vag doesnt make you a TV Mom, then idk what does. And please, do not come at me with all that the family actually really loves each other bullshit, okay? This woman has pimped her own children into making more questionable decisions than the cast of in Cabo and signed off on letting her daughter get lip fillers at 16 years old. The bones in your face arent even done growing at that age. And yes, Kris is a marketing mastermind who literally birthed the Kardashian empire from her womb, but she def falls into the evil genius category. She also tried to trademark #proudmama as if she invented the concept of finding joy in your children’s accomplishments.

So, weve already spoken at length about why sucks as a show, but weve yet to delve into the horror that is Clays mother. Mrs. Jenson, welcome to your tape. First off, I can think of approximately 100,000 ways to suggest your child go back on medication than to try and casually serve him a Prozac bottle along with his breakfast. Also, how the fuck you gonna let your kid walk around with a 2-inch festering wound on his face for weeks? Homeboy literally has jaundice by the end of this series as a result of your negligence. Speaking of the end of this series, your son has been displaying serious signs of mental illness for weeks now. And yes, Mother Genius, your son was friends with Hannah Baker. Actually, all accounts point to her being both his best friend and the love of his life, so maybe you should pay a little bit more attention to whats going on. And umm…yeah…maybe defending the school in this whole lawsuit thing is not a good idea? Just a thought. 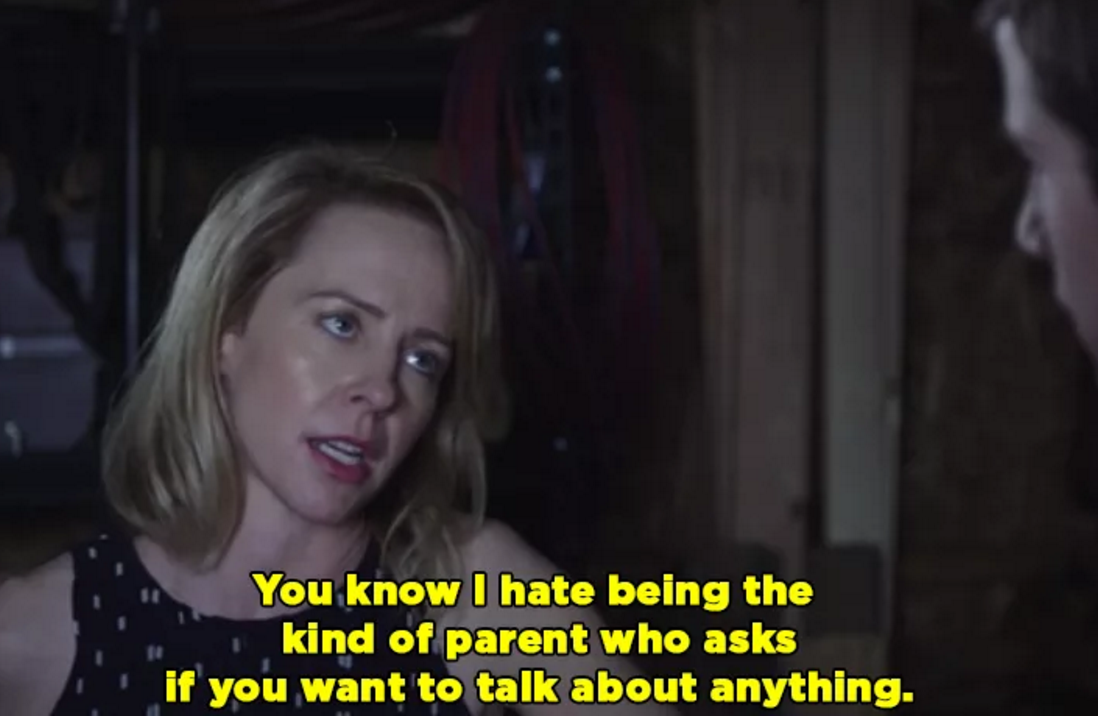 Julie Cooper-Nichol is the OG Bad TV Mom, which is why well always have a place for her in our cold, dead hearts. Julie vacillates between hooking up with her teenage daughters ex (who is supposed to be like, 15 years old BTW) and sucking old-ass Caleb Nichols ancient dick so she can inherit his fortune. Julie gives approximately 0 fucks about the fact that Marissa is an alcoholic kleptomaniac, and really only cares about making sure that nobody knows that she actually grew up one town away from Ryan and is basically new money. Sure, in the later seasons Julie becomes a better mother after losing everything, but I think we all know that the first two seasons of are the only ones that really matter.

Betty Draper is the pinnacle of early 60s bad motherhood and gave us a glimpse into what your mom is talking about when she gets all dark and calls your grandma a difficult person. If any of you can find a single scene where this woman is not blowing cigarette smoke into her own childrens faces and silently staring in hatred at her husband, please send along. Betty wants so badly to be the perfect 60s housewife (exemplified by the fact that she named her kids Sally and Bobby) that she turns out to be one of the worst TV moms of all time. Remember when Sally got caught masturbating at a friend’s house? How did Betty deal with that very delicate situation? By slapping Sally across the face and telling her shes going to cut her fingers off. Still on the fence about Betty as a bad mom? What about the time she called Sally a little lesbian for playing with Dons toolbox? Or the time she replied thats impossible! when Bobby told her his eyes were burning from the cigarette she was smoking in his face? Still not convinced? Heres a video of her giving absolutely 0 fucks about her young child playing with an extremely hazardous object:

Honestly, Cersei is better off without the kids. Cant wait for season 7!

So yeah, being a good mother and selling weed are not really compatible. And sure, Nancy was just trying to stay afloat after losing everything in a divorce, but there were definitely a couple options open to her before she needed to resort to becoming a drug dealer. Like, has she not heard of having an Etsy store? Like, maybe instead of becoming a drug lord, you should focus on the fact that your youngest son appears to be obsessed with the city of Pittsburgh and is literally called Strange Botwin by his peers. That shit is not normal. No wonder this kid ends up taking a human life and developing a yeast infection in his penis. He never stood a chance.

So uh, yeah, having sex with your adult son and causing him so much mental anguish that he volunteers to be in World War I def precludes you from receiving a worlds best mom mug any time soon. Like, yeah I get that you were 13 when you had James so youre not that far apart in age but uh…youre still his mom so.no fucky. Honestly, I dont think I really need to provide any more evidence of Gillians inadequacy as a mother, or go into her later heroin addiction. Once you hook up with your kid, its kind of a cased closed situation.

Sad to report that this list contains not one, but two actual mothers of actual real life children, but this list would not be complete without Mama June. Mama June is solely responsible for half the cases of child diabetes in America with the diet she promoted for her children. Honey Boo Boo was literally five years old and she was drinking Go Go Juice that contained as much caffeine as two cups of coffee. When asked why she feeds her child enough Mountain Dew to fill a vending machine, Mama June said, There are far worse things…I could be giving her alcohol. Umm…yeah…I guess that would be worse. Youre right. You could also be feeding her knives. So congrats on not feeding her knives! Thats some truly incredible parenting right there.

Also, she let knew her boyfriend was a pedophile and let him chill in the house so…um…yeahbad parenting.

Congrats on the weight loss though!

Before she decided to become a legitimate actress, Shailene Woodley portrayed Amy Juergens, a very realistic character who loses her virginity and band camp and gets immediately pregnant. Like ya do. Its hard to say if the issue here was that Amy was a bad mom, or that was a bad show, but either way, watching this chick try to juggle regular high school problems with her pregnancy was exhausting AF. Like, maybe you should cool it on some of the Ben/Ricky romance drama until after youre done carrying another human life around in your body. Also, hey, maybe dont immediately get engaged to the not-father of your child as soon as you find out your pregnant at 15? Just a thought!

So by worst here, we mean best. Lucille Bluth is the betchiest TV mom since like…ever. Its actually hard to even include her here without the article becoming just a list of her best quotes. Lucille is a functional alcoholic (same) who gives 0 fucks about what her children do, regularly sleeps with her husbands identical twin Oscar (that hair) and actively hates her own best friend, who is also named Lucille. She knows for a fact that Busters dad is Oscar (again, that hair) but never says anything about it because frankly, Lucille DGAF. Lucilles only sources of joy are money, alcohol, and the antics of private detector Gene Parmesan, but thats okay because for as much as Lucille hates everything, we love the fuck out of her.