For years we mocked our neighbours unstable governments. Now, with Brexit upon us, the joke is on this country 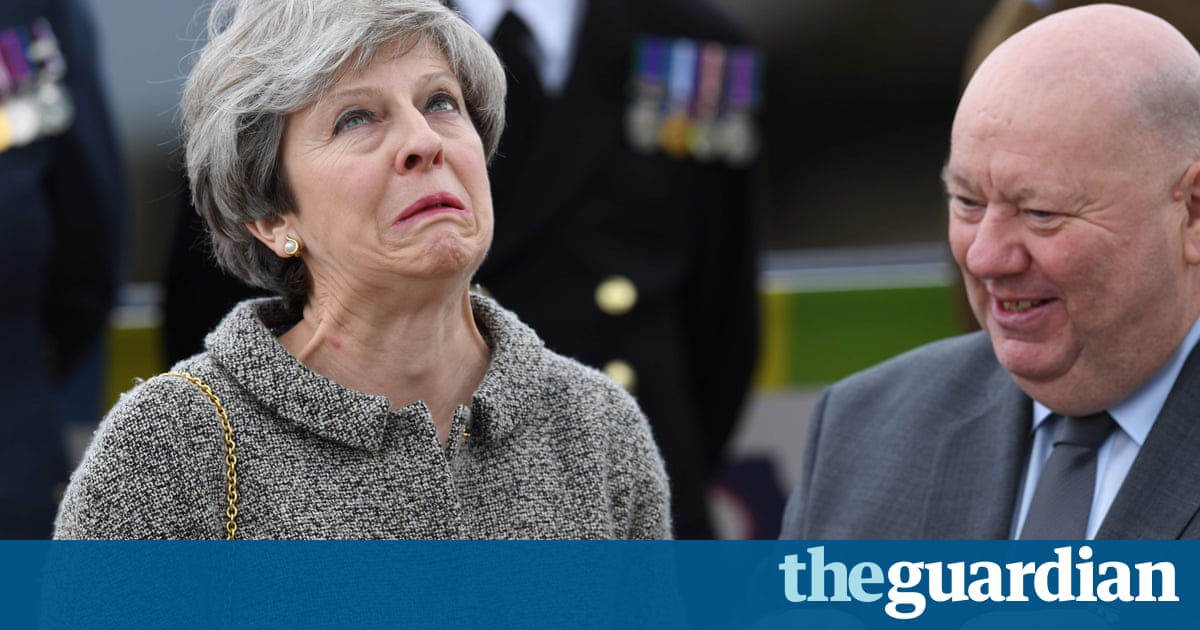 A cartoon in a Dutch newspaper depicts Mrs May whacking herself over the head with a mallet. Another Dutch publication has the prime minister entering the Brexit negotiations with her severed head cradled under her arm. It is not just the Netherlands that is having a good giggle. Britains prime minister and, by extension, Britain itself is an object of torrential mockery across Europe. Here is payback for all those years when snooty Albion turned up a haughty nose at the continentals with their funny proportional electoral systems that produced unstable governments.

Though European leaders are too polite to put it so bluntly, they think that this country, once thought to be a nation of level-headed pragmatists, has taken leave of its senses. First, Britons narrowly vote to quit the worlds largest and richest free trade area. Then, at an election less than 12 months later, Britons split their support between the parties in such a way that there is no consensus in parliament about the terms on which Britain should leave. There is not even agreement about how to proceed on Brexit within the riven ruling party. Ridicule abroad is matched by ridicule at home. This side of the channel, Mrs May is now routinely referred to and depicted as the zombie prime minister, a phrase I used to describe her immediately after the election.

There is an irony about this the most bitter of ironies for Mrs May. In other European countries, the result she achieved on 8 June would be considered not an abject humiliation but an extraordinary triumph. She won 13,669,883 crosses in boxes and a share of 42.4%. In terms of votes, that was the best result for any party leader in Britain since John Majors victory in 1992. In terms of share, that was the most impressive performance since Margaret Thatcher secured a parliamentary landslide in 1983.

Most European leaders would give their right arm for the sort of vote secured by Mrs May. Angela Merkel is, by common consent, the titan of European politics. The German chancellor has had three terms in office and most think she will be back for a fourth after elections in the autumn. At none of her elections has Mrs Merkel matched Mrs Mays vote share. All the German chancellors governments have been coalitions. Mark Rutte is the prime minister of Holland. When the Dutch had an election back in March, his Peoples Party for Freedom and Democracy lost a chunk of seats and fell to a vote share of just 21.3%. Mr Rutte remains Hollands prime minister. His head has not been chopped off by his countrys cartoonists. Emmanuel Macrons recent parliamentary landslide in France is exceptional. The great majority of EU countries are run by coalitions of varying degrees of stability. Yet no one calls this a crisis. Thats because the hung parliament is normal for Europe, as is the expectation that it will mean different parties coming together and collaborating in the exercise of power. That is in the DNA of their political cultures.

The hung parliament is not normal for Britain. Or rather, Britons have been schooled to think its not normal. They have been told, not least by Tories, that the wonder of first-past-the-post is that it delivers robust, single-party governments with the capacity to get things done. In fact, it has failed to do that at all of our last three elections. 2010 resulted in a hung parliament and 2015 produced a Tory government with a precariously slim majority. Mrs May called a snap election with the ambition to restore the old order of majoritarian government, blew her chance and has ended up with a shattered premiership and another hung parliament.

The longer historical trend is worrying for Tories. The Conservatives have not won a Commons majority of more than 20 in a quarter of a century. This is why they were so excited when they thought Mrs May would deliver a big win for them. It is why her failure has cast them into so much existential angst about their deeper failings as a party. As for Labour, it last won an election, under Tony Blair, in 2005. If you dont count him as Labour, then you have to go back to Harold Wilson in 1966 for the last time Labour secured a decent parliamentary majority. Admirers of Jeremy Corbyn, intoxicated by the partys above-expectations performance, will tell you that he is just one more heave away from sweeping the country. More sober Labour people are aware that the party needs to gain an additional 64 seats more than double the gains that it achieved on 8 June to get to a Commons majority of just one.

In such volatile times, I make no confident predictions about the future, but it may be we should start to consider the possibility that Britain has become averse to electing powerful governments or is too divided in its allegiances to award a decisive mandate to anyone.

The coming months will illustrate the advantages of having a minority government. Obsessions that excite only Tories are not going to waste the time of parliament. So there wont be a vote to overturn the law on fox hunting. Free lunches for primary school children wont be scrapped. There wont be a dash to create more grammar schools. Restrained by their lack of mandate and majority, ministers will be obliged to concentrate on doing some sensible things that wont provoke much controversy, such as curbing insurance frauds and tackling domestic abuse. There is a gathering consensus that the election result signalled a national impatience with austerity. Even Philip Hammond, the flinty fiscal disciplinarian at the Treasury, agrees that voters are weary of the long slog. Some of the edge may be taken off cuts.

The country will also have an extended education in the many disadvantages of a single party trying to rule without a majority. There has been an early pointer to that in the acrimonious haggling between the Tories and the Democratic Unionists. Minority governments can endure, but they only do so by living day to day, hand to mouth, vote by vote, the ability to survive contingent on appeasing this interest here and buying off that lobby there. This will be a grislier experience than a tour of a factory that makes sausages.

The prime ministers authority is shot. Im not sure which is the more degrading for Mrs May: to be publicly scolded by her chancellor for her atrocious election campaign or to be told she has the undying loyalty of Boris Johnson. It is not healthy to have an enfeebled leader left to linger in the job only because her colleagues cant see a way out of this impasse.

A German solution would be to form a grand coalition between the main parties of left and right. The successful Mrs Merkel has presided over two. Britains political culture militates against a red-blue power share and it is even more inconceivable given the personalities of the Tory and Labour leaders and the stark polarisations of their positions.

By their past behaviour, the Tories have destroyed what might have been another option for them. Britains most recent experience of coalition was the cohabitation between the Tories and the Lib Dems in the five years from 2010. That was by no means perfect, but it was a great deal more strong and stable than the chaos that has been unleashed in the two years since the country came under solo Conservative rule. How cunning the Tories thought they were when they cannibalised their moderating, pro-European coalition partners at the 2015 election; it doesnt look so cunning now. As Vince Cable has wittily remarked, having mated once with the Tory praying mantis, the Lib Dems are not going to do it again.

A minority government with a husk for a leader is especially badly equipped to make a success of Brexit. Europes leaders are heavily disincentivised to expend any of their political capital being helpful when they do not know how long Mrs May will last and Britains desires appear to be in such flux. Our bargaining position would be much stronger if there was cross-party backing for a durable and intelligent approach to the most momentous and hazard-strewn negotiation since 1945.

There are some who argue that the parties should collaborate on Brexit. But both the circumstances of the moment and Britains adversarial political traditions are the enemies of cooperation. For Mrs May to reach an accommodation with the opposition parties would involve the softening of her positions on crucial aspects of Brexit. That would risk igniting rage among the hard Brexiters. In so much as Mrs May has any support base left in her party, the hard Brexiters are it.

Some Labour MPs see a virtue in collaboration, both in the national interest and because they believe it would burnish Labours credibility and enhance its claim to be a government-in-waiting. Most Labour MPs incline to agree with the calculation of the partys leadership that their advantage is best served by letting the Tories thrash about in this mire of their own making.

Im not going to tell you how this will end because I dont know. I think we can be fairly confident that we have not heard the last of being laughed at.