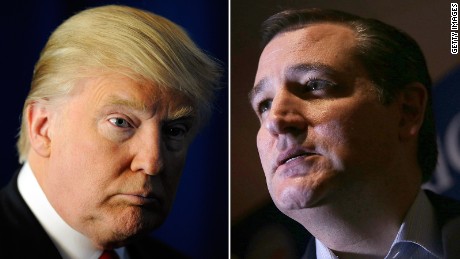 Washington (CNN)Ted Cruz for a third time would not say that he would support Donald Trump as the GOP presidential nominee, the latest sign that his pledge to do so may be softening.

Programming note: CNN will host the final three Republican candidates at a live town hall in Milwaukee from 8-11 p.m. ET Tuesday.
Cruz late last week began signaling that his unconditional support for the Republican front-runner was not as ironclad as previously. But asked by CNN’s Sunlen Serfaty on Monday if he would definitively say that he would not support Trump, the Texas senator left his answer ambiguous.
“I’m not in the habit of supporting people who attack my wife and attack my family,” Cruz said. “Donald Trump is not gonna be the nominee. We are gonna beat him for this nomination.”
Pressed why he would not come out and say that Trump wouldn’t have his support in a general election — which some of his female supporters have said — Cruz continued to evade a direct answer.
“What I am saying is we are going to beat Donald Trump for the nomination. We are seeing Republicans uniting,” he said. “The best way to prevent Donald Trump from being the nominee is beat him at the ballot box, and that’s what we are doing right now.”
Cruz in the past has said he would support the Republican nominee no matter what because he promised to do so at the outset of the GOP race. But Cruz’s fractious relationship with Trump grew even more tense last week when the real estate mogul began to mock his wife, Heidi, and a salacious tabloid report surfaced that Cruz pinned on Trump and his associates.
The pair are set to appear on CNN’s town hall Tuesday evening. Cruz’s campaign has encouraged the GOP front-runner to combine their individual hours of airtime into a two-hour, one-on-one debate. On Monday he extended that invitation again.
“He’s liked the earlier debates that had 10 or 11 candidates, because everyone there gets 30 seconds or 60 seconds, and it’s not hard to read talking points for 30 seconds or 60 seconds,” Cruz said. “But after that, Donald runs out of things to say.”
Later on Monday night, Trump responded to Cruz’s debate challenge via Twitter.

Lyin' Ted, I have already beaten you in all debates, and am way ahead of you in votes and delegates. You should focus on jobs & illegal imm!

“Lyin’ Ted, I have already beaten you in all debates, and am way ahead of you in votes and delegates. You should focus on jobs & illegal imm!,” he tweeted.