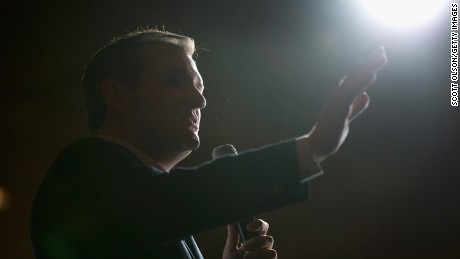 Washington (CNN)Ted Cruz is girding for an admittedly long, narrow path to clinching the GOP nomination before the GOP convention in July, a tightrope walk that has no margin for error if he is to dethrone Donald Trump at the ballot box.

Gone are the projections that the GOP race would be practically finished by the end of March, along with hopes to sew up the nomination after outlasting Marco Rubio. They’ve been replaced by hopes to reach the delegate threshold on the very last day on the Republican calendar — and if that’s not possible, to successfully screen delegates and emerge the victor at a contested Republican convention.

Cruz’s team, once confident that they had the money and the map to outpunch and outrun any of their rivals, are conceding to a humbler reality: This will be a grind.

“It’s very difficult for us to get to 1,237 — we get that,” Cruz’s chief strategist, Jason Johnson, told reporters, “but we can get there — and we plan on getting there.”

After a winless evening on Tuesday, Cruz’s campaign is effectively planning two strategies at once: one aimed at winning the 1,237 delegates needed to win the GOP nomination on the first ballot, and a quieter, second route meant to serve as a contingency plan should they fail to run the flawless bid that they must through June 7: outmuscling their rivals on the convention floor.

Cruz’s aides are hopeful for a path that leads them to as many as 1,252 delegates, according to a campaign memo authored by Cruz analytics chief Chris Wilson. Trump currently leads him by 254 delegates, and that lead may grow next Tuesday, when campaign aides are signaling that Trump is likely to defeat them in Arizona, which awards 58 delegates.

Cruz aides predict that 55% of the vote there has already been cast, and they expect John Kasich to play spoiler and prevent Cruz from overtaking Trump’s early vote lead on election day. They are more confident next Tuesday about Utah, which has fewer delegates but is a caucus state and one where they hope Utah Sen. Mike Lee’s endorsement can pay dividends.

States like Utah that hold caucuses or conventions, often with arcane rules that reward strong field operations, will be the Cruz campaign’s focus. Another priority will be closed primaries, which disadvantage Trump, who has enjoyed wins on the backs of independents or Democrats who cross over in open primaries.

The map turns significantly less friendly though for Cruz in coming months, with very few evangelical and deep red states left to vote. Johnson though is pointing to two April states where they expect to wage war: Wisconsin, where advisers say to expect “a lot of Cruz campaign activity,” and Trump’s delegate-rich homestate of New York.

“If you think we’re ceding New York because Donald Trump hails from Queens and lives in Manhattan, that would be a mistake,” Johnson said.

The other date circled on the Cruz calendar: June 7, the largest delegate day remaining on the calendar. Cruz has long pointed to surprisingly strong polling in California, and the memo says he is currently on track to win 55% of the vote there. It also says Cruz is positioned to win Montana, and to take home a majority of New Mexico’s delegates.

But that’s the best-case scenario. A far hairier — and likelier — position for Cruz would be to wage a tense and complicated delegate battle at the Republican National Convention, an audience full of party regulars unlikely to break for a candidate of Cruz’s ideological ilk.

Cruz has blasted the idea of a “brokered” convention, but recently began expressing support for a “contested” one open only to those who are running for president.

“The delegates decide between the candidates that have gotten a whole bunch of delegates,” Cruz told radio host Hugh Hewitt on Tuesday. “That’s actually the democratic process working the way it’s supposed to.”

So Cruz campaign aides are preparing their Plan B, a convention fight, even as they believe they have a greater than 50% chance of reaching 1,237. They have tasked an expert on the delegate process, Saul Anuzis, with sketching out various scenarios, and the campaign is focusing on keeping committed the delegates that they’ve won.

“That’s a laborious process — and we are absolutely doing that,” Jeff Roe, Cruz’s campaign manger, told reporters as results came in Tuesday evening, pointing to states like North Carolina that elect delegates the same day as presidential ballots are cast. “So that’s a big part of the process to make sure your delegates don’t get stolen.”

The campaign will play offense, too. Roe said Cruz would look particularly at the now-unbound delegates won by Rubio.

An immediate focus, though, will be on replenishing fundraising coffers now that the slower schedule allows for more finance events. The race is about to get even more expensive — the campaign launched television buys in Arizona and Utah this week, and the candidate is expected to campaign there over the next few days.