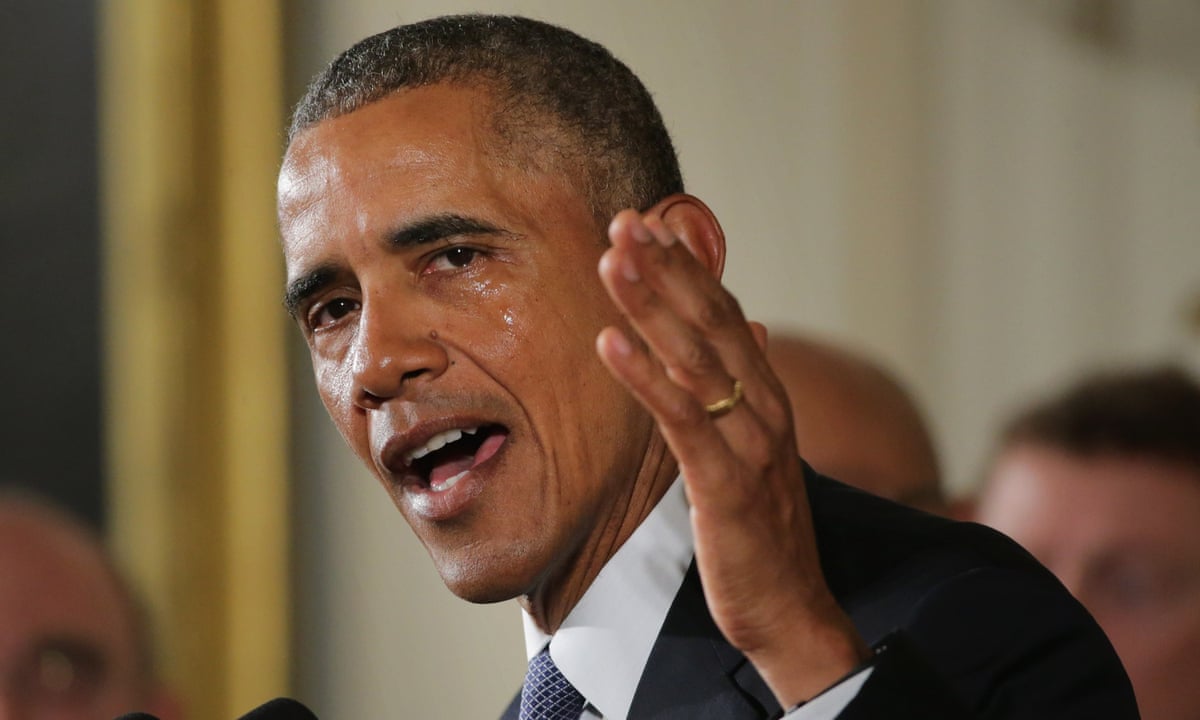 A tear-stained Barack Obama marked his final year in office with a last-ditch call for US gun control on Tuesday as he outlined new rules that will close important background check loopholes but leave much of the political heavy lifting to his successor.

In a much-anticipated speech that focused more on what still needed to be done than the limited set of executive actions announced in advance by the White House, the president painted gun reform as the last great civil rights challenge of his generation.

In Dr Kings words, we need to feel the fierce urgency of now, because people are dying, a visibly emotional Obama told an audience of mass shooting victims and relatives in the East Room.

Our inalienable right to life and liberty and the pursuit of happiness, those rights were stripped from college kids in Blacksburg and Santa Barbara and from high schoolers at Columbine, and from first-graders in Newtown, he added, his voice shaking. First-graders. And from every family who never imagined that their loved one would be taken from our lives by a bullet from a gun.

The president had been introduced by Mark Barden, the father of Daniel, one of the 20 young children killed at Sandy Hook elementary school in Newtown three years ago. As his speech rose to its climax, with tears rolling down his cheeks, Obama said: Every time I think about those kids, it gets me mad and, by the way, it happens on the streets of Chicago every day.

In a rhetorical twist designed to undermine arguments against reform, the president insisted his plan to force all buyers of guns to undergo background check was not a plot to take your guns but comparable to going through metal detectors to board a plane and merely the price of living in a civilised society.

I believe in the second amendment. Its there written on the paper No matter how much people try to twist my words I taught constitutional law. I know a little bit about this. I get it.

As well as expanding background checks to clarify that online sellers and gun shows need to be licensed, Obama also called on Congress to authorise extra spending for mental health and enforcement agents as well as new research into technology that can prevent unauthorised use of weapons by children and thieves.

We need to develop new technologies that make guns safer, he said. If we can develop technology that you cant unlock your phone unless youve got the right fingerprint, why cant we do it for guns? If a child cant open a bottle of Aspirin, we should make sure that they cant pull the trigger on a gun.

Reaction has been split about the impact of closing the existing loopholes for background checks, with the National Rifle Association insisting it would make little difference but gun control campaigners declaring it a landmark step in keeping weapons out of the wrong hands.

Weve created a system whereby dangerous people are allowed to play by a different set of rules That doesnt make sense, Obama said. Everybody should have to abide by the same rules.

But Obama largely skipped any detailed discussion of the measure and concentrated on a highly political effort to persuade moderate Republicans to join his wider efforts to end legislative deadlock.

The gun lobby may be holding Congress hostage right now but they cannot hold America hostage, he said. Congress needs to act, but folks in this room will not rest until Congress does We cant wait.

Republican presidential candidates, who have universally pledged to overturn Obamas executive orders if elected, reacted with swift outrage to the presidents announcement.

Former Arkansas governor Mike Huckabee issued one of the fiercest statements, saying: In America we believe in the constitution, not confiscations, dictatorships or Kings, and Obamas newest assault on the Second Amendment is a blatant, belligerent abuse of power. Huckabee, who is currently lagging far behind the polls, added: I will never bow down and surrender to Obamas unconstitutional, radical, anti-gun agenda.

In contrast, Democrats praised Obamas action. Former secretary of state Hillary Clinton tweeted: Thank you, @POTUS, for taking a crucial step forward on gun violence. Our next president has to build on that progress not rip it away.

At the outset of his emotional speech, Obama acknowledged the presence of Gabby Giffords, the congresswoman who survived a gunshot wound to the head in 2011, as well as families of gun violence victims that he enlisted directly in his call for action.

He told Barden, the Sandy Hook father who lost his son in December 2012: I still remember the first time we met, the time we spent together and the conversation we had about Daniel, and that changed me that day, and my hope earnestly has been that it would change the country.

Five years ago this week a sitting member of Congress and 18 others were shot at at a supermarket in Tuscon, Arizona. It wasnt the first time Ive had to talk to the nation in response to a mass shooting, nor would it be the last. Fort Hood. Binghamton. Aurora. Oak Creek. Newtown. The Navy Yard. Santa Barbara. Charleston. San Bernardino. Too many.

Some members of the audience repeated the words: Too many!

Much of the speech echoed similar heartfelt calls by the president in the wake of each of these mass shootings, but the White House is hoping that by staging one of its last big set-piece events before the start of the presidential election season next month, it can jolt the American public out of the political stalemate.

And we need voters who want safer gun laws and who are disappointed in leaders who stand in their way to remember come election time. Some of this is just simple math. Yes, the gun lobby is loud and it is organised in defence of making it effortless for guns to be available for anybody any time. But you know what, the rest of us, we all have to be just as passionate, we have to be just as organised in defence of our kids. This is not that complicated.