New report shows teacher pay is declining, even as more educators have masters degrees and doctorates 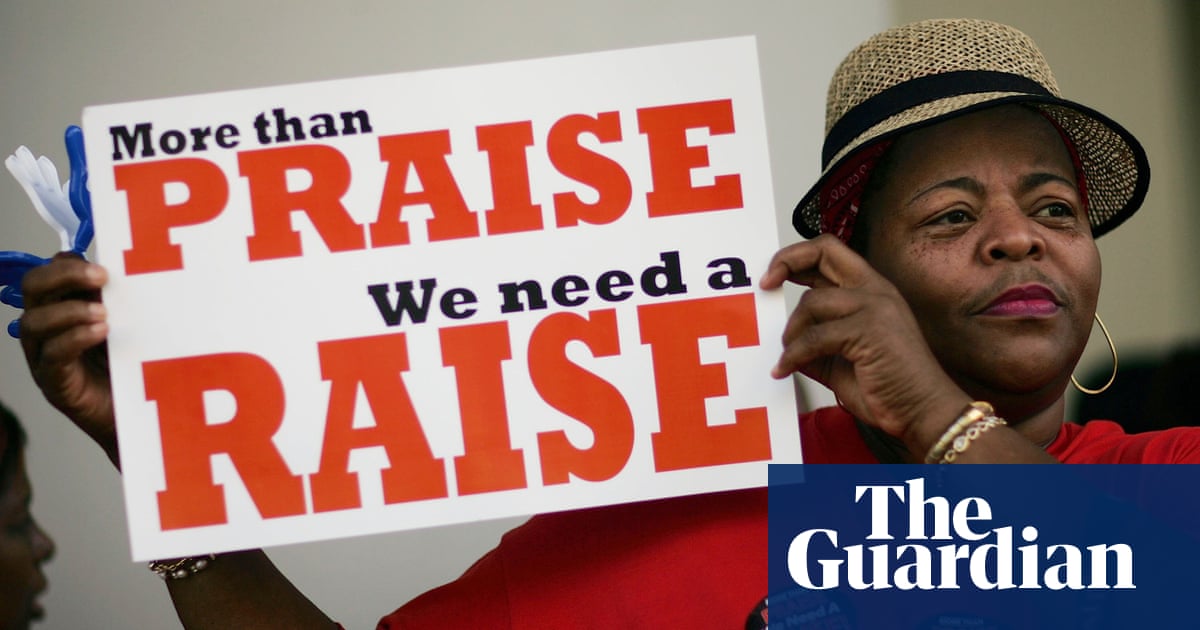 American teachers are getting paid less – even though they are better qualified than ever, new research has found.

Teacher salaries are down by nearly 5% compared with before the Great Recession – and it’s not because teachers are younger or less educated, according to the Brown Center on Education Policy at the Brookings Institution.

In fact, the opposite is true.

“Many people don’t understand that is is becoming harder to stay a teacher because they are getting less and less money out of it,” said the Brown Center director, Michael Hansen. “They’re actually more qualified than they ever have been in the past, and we’re actually paying them lower.”

As a wave of teacher strikes and protests swept several states last spring, researchers found that after adjusting for inflation, teacher salaries had fallen by an average of 4.6% compared with the school year that started in 2009, according to data from the Digest of Education Statistics.

The states that saw teacher demonstrations, including West Virginia, Arizona and Kentucky, have seen even sharper salary declines, of at least 6% each from their highpoint.

Some observers argued the drop wasn’t driven by school districts getting stingier, but by baby boomer teachers retiring and being replaced by younger millennials, who earn less earlier in their careers.

The new report found that doesn’t pan out – the average teacher was actually three months older in 2016 than in 2007, before the recession.

And teachers have racked up more advanced degrees that typically come with bigger paychecks – 54% have master’s degrees, up from 49% before the recession. The share of teachers with a doctoral degree rose from 2.5% to 4.5%.

The salary declines come as other costs are rising. Teachers are contributing an average of nearly $1,500 more per year to their health insurance premiums than they were 10 years ago. And many teachers are saddled with student debt as the costs of higher education rise. Many school districts pay teachers more if they have master’s degrees, leading teachers to take on more debt. A 2014 study found people with master’s degrees in education had more student loan debt ($50,879 on average) than those who earned an MBA ($42,000).

Depending on which data you look at, the drop in teacher salary nationally measures between 2.2% and 4.6%. But the increased qualifications teachers now have, minus other changes, should have yielded a salary increase of 1%.

Teachers make about 20% to 30% less than similarly educated professionals in other jobs – a gap that is larger in the United States than any other developed country, the center has found.

In states where teachers took to the streets last spring, only one saw an influx of younger teachers to explain salary declines. In West Virginia, where teachers launched a nine-day strike in February over low pay and rising health insurance premiums, teachers were three years younger on average. That wasn’t the case in any of the other states, and several had more teachers with advanced degrees.

There is one demographic change that might help explain why teachers get paid less than they used to: slightly more teachers are women, and female teachers earn less than males do. Women were 75.6% of the workforce in 2016, compared with 74.3% in 2007, the researchers found.

Hansen said the dip in teacher salaries helps drive persistent vacancies in teaching jobs that exist in many states – and may also be contributing to a less diverse force of educators. Fewer young teachers are people of color, compared with their older peers – perhaps because white teachers are more likely to have high-earning spouses and can afford to stay in lower-paying jobs.