Stocks in Asia traded near decade highs, while the euro held gains spurred by Catalonia’s president stepping back from an immediate declaration of independence from Spain.

Japan’s Topix index fluctuated after closing at the highest in 10 years on Tuesday, weighed down in part by a collapse in Kobe Steel Ltd. Stocks were higher in Sydney, Seoul and Hong Kong. The Dow Jones Industrial Average set a fresh record high, and the largest exchange-traded fund tracking Spanish equities advanced. The dollar retreated from recent highs thanks to waning optimism over the Trump administration’s tax-cut plans. Australian bonds rose as the market easily digested a record auction of government debt. 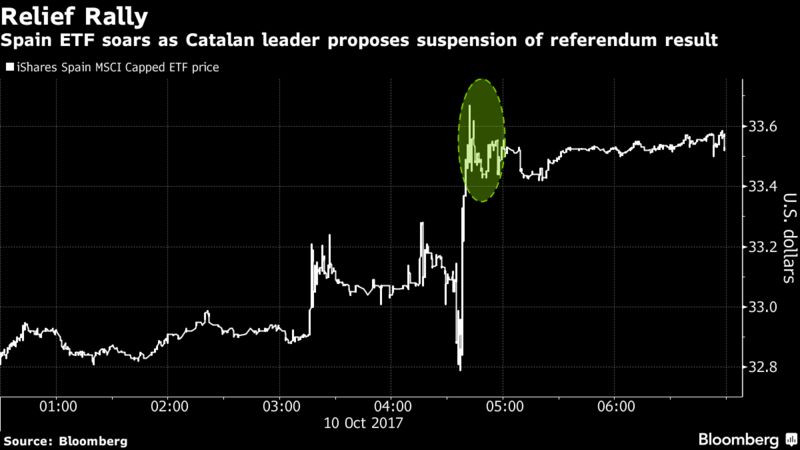 China’s exchange rate is in focus after recent volatility in the yuan spurred some speculation policy makers could widen the trading band. Though mostly a symbolic step, it would add to the impression China remains directed toward giving market demand a greater role. People’s Bank of China Governor Zhou Xiaochuan this week argued in favor of further reforms in a magazine interview ahead of next week’s Communist Party leadership gathering.

The euro hit the highest level in almost two weeks after Catalan President Carles Puigdemont said that while an Oct. 1 referendum had given him the mandate to pursue independence, he would “suspend” the result for a period of some weeks for dialogue with Prime Minister Mariano Rajoy’s administration. He suggested that the European Union should be involved in the talks, and sought to reassure companies fleeing the region.

The pound remained about 2 cents higher than its recent lows after U.K. Prime Minister Theresa May won public support from Brexit hardliners in her cabinet for outlining contingency plans for leaving the European Union without a deal.

Ten-year U.S. Treasury yields were below their recent highs of 2.40 percent, amid a feud between President Donald Trump and high-ranking Republican Senator Bob Corker that’s put the tax-reform agenda in question. Trump said he’ll tweak his tax plan within a few weeks and dismissed fears that the dispute with Corker will hurt its chances.
Terminal subscribers can read more in our Markets Live blog.

What’s coming up this week:

Here are the main moves in markets: