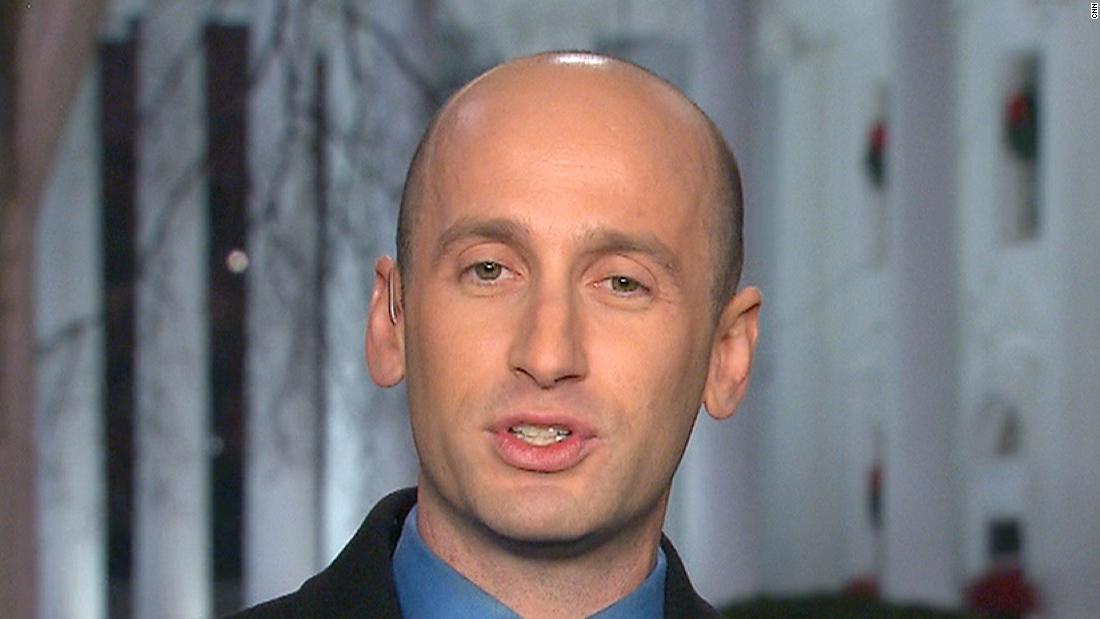 (CNN)Presidential adviser Stephen Miller backed President Donald Trump’s decision to pull troops out of Syria in a combative CNN interview Thursday night, arguing that the United States has been fighting ISIS in its enemies’ stead with great losses in US lives.

Miller echoed the President’s comments that ISIS had been defeated in Syria, while putting the onus on Russia, Turkey and Syria to crush any future extremism.
“ISIS has been defeated,” he said. “But if ISIS wants to retrench and regrow and reorganize, it’s going to be up to those countries to defeat their enemy.”
When asked about reports that Trump also might move to withdraw the nearly 14,000 troops stationed in Afghanistan, Miller replied, “I have absolutely no policy announcements of any kind to make tonight whatsoever.”
He weighed in on the sudden departure of Secretary of Defense James Mattis, who cited irreconcilable policy differences in his resignation letter Thursday.
“He and the President had a great relationship,” Miller insisted.
“At the same time, as you know, President Trump believes that many immensely wealthy countries are taking advantage of the United States … while we protect these very wealthy countries,” he added. “The President has been very emphatic about the need to get a fair deal for the American taxpayer and to make sure that we’re only engaged in activities that are in our national interests.”
When Blitzer asked why the President tweeted that Mattis was retiring when the defense secretary released a letter of resignation, Miller replied, “James Mattis is retiring.”
“At the same time, as Mattis said in the letter, the President is entitled to a secretary of defense that has strong alignment with his views,” Miller said, later adding, “It’s also very normal at this point in the administration to have turnover.”
Miller also pushed back on Blitzer’s reference to Republican criticism of Trump’s decision on Syria, including from Sens. Lindsey Graham of South Carolina and Marco Rubio of Florida.
“Some of the voices you’re talking about, like our dear friend Lindsey Graham, who we like a great deal, have been wrong about Middle East policies, wrong about Iraq,” Miller said.
Meanwhile, several lawmakers of both parties lamented Mattis’ departure.
Just read Gen. Mattis resignation letter,” Rubio tweeted. “It makes it abundantly clear that we are headed towards a series of grave policy errors which will endanger our nation, damage our alliances & empower our adversaries.”
Connecticut Sen. Richard Blumenthal later told Blitzer that he and his Senate colleagues counted on Mattis for stability in an otherwise turbulent administration.
“When we’ve said to ourselves on the Armed Services Committee or in the Senate that we were deeply disturbed and worried about a petulant and unpredictable administration, we could reassure ourselves and the nation that there was a strong and stable expert, a patriot, in the position of standing between the President and the use of military force,” Blumenthal said.
California Rep. Eric Swalwell said on CNN’s “Erin Burnett OutFront” that he hadn’t “agreed with every decision of [Mattis’], but he has always been a force to restrict the President, intervene against the President’s worst instincts.”
“It’s just a fear that the adults in the room, the experts … they’re leaving, and that makes us less safe,” Swalwell added.”