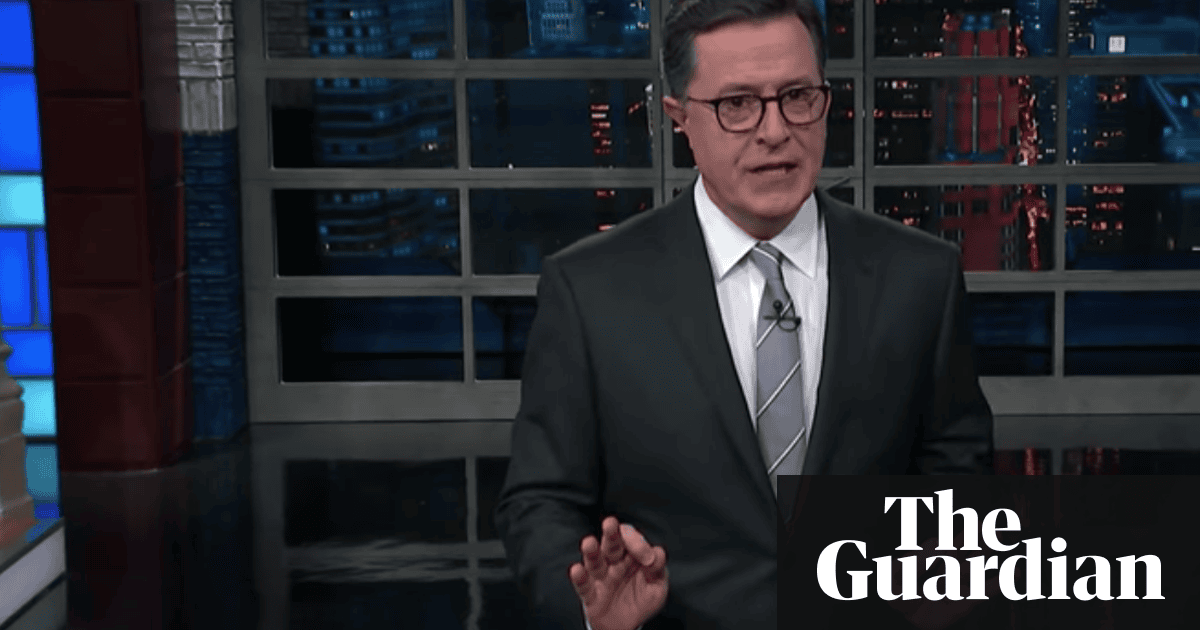 “Huge news this afternoon: first son-in-law Jared Kushner was denied his security clearance and has lost access to top-secret intelligence,” began Stephen Colbert. “How will he fix the Middle East now? He was so close to starting.”

“So far, Trump has not commented on Jared’s demotion,” the host continued. “He tweeted a bunch of stuff this morning, but one that really stood out was just two words, all caps: WITCH HUNT!”

Colbert went on to say that, “despite the ironclad defense”, the House intelligence committee interviewed White House communications advisor Hope Hicks, who stonewalled the committee by refusing to answer questions about events occurring after Trump took office.

“There is no doubt in any of the intelligence agencies that Russia did everything it could to influence the 2016 elections, from effective methods like Facebook ads and Twitter bots, to total dead ends like Don Jr,” Colbert continued, noting that intelligence chiefs agree unanimously that the Kremlin efforts will continue into the 2018 midterms.

“And with this sword hanging over the neck of American democracy, earlier today the Senate armed services committee heard testimony from director of the NSA Admiral Mike Rogers,” the host said. “The Trump administration has refused to impose sanctions Congress overwhelmingly approved to punish Russia, and Rogers believed that sent Putin a clear message.”

In his testimony, Rogers concluded that Putin believes there’s little “price to pay” for his interference and, when questioned by senators about the NSA’s response, revealed that he had not been given the authority by Trump to combat Russian cyberwarfare.

“Thats right,” Colbert said. “The president has not told the National Security Agency to secure the nation against Russian hacking that we know is still happening.”

Comedy Central’s Trevor Noah also looked ahead to the 2018 midterms.

“These elections are shaping up to be dramatic, because with Trump’s low approval numbers the Democrats have the momentum going into November,” Noah said. “Rather than have to deal with that blue tidal wave, dozens of Republicans have decided to retire instead. Those vacancies are shaking things up, like in Utah, where an open seat has made room for an old character to get a new storyline.”

“So, Republicans have old new people running, Democrats have some new old people running, but as with any election there’s always going to be someone who’s doing it just for the fame,” Noah added, before revealing Clueless actor Stacey Dash’s intentions to run in a southern California congressional district.

Noah then showed clips of Dash’s commentary on Fox News, in which she advocated doing away with Black History Month and the BET network, saying they were obstacles to integration.

“Good Lord, forget Congress; Stacey Dash should run for president of the sunken place,” Noah joked. “Stacey isn’t running because she actually expects to win. We know this is a publicity stunt to raise her profile for her next job, which I’m guessing is either going to be Big Brother or the star of a movie that only gets released in Bulgaria.”

“The point is,” Noah concluded, “we better pray that Vladimir Putin isn’t a big fan of Clueless.”

Finally, Seth Meyers talked about the Trump administration’s response to the opioid epidemic.

“America has about 4% of the world’s population, but about 27% of the world’s drug overdose deaths,” Meyers began. “For now, opioid addiction is one of those uniquely American problems, like type 2 diabetes and adults wearing shirts with Disney characters on them.”

Meyers asked: “Among other promises to fight the opioid epidemic, Trump said he would increase funding to give resources to states that needed it most right away, so how did that go?”

Meyers then showed Trump discussing the epidemic in a recent speech, in which he said that there is nothing desirable about drugs.

“The problem, of course, is that there is something desirable about drugs,” Meyers responded. “They make you feel great. That’s why we have a huge problem with drug addiction and no problem at all with celery addiction.”

Meyers then explained that White House adviser Kellyanne Conway has been put in charge of the epidemic. “Reports say Kellyanne isn’t even heeding the advice of actual policy experts or those most affected by this tragedy,” the host explained, noting that the Office of National Drug Control Policy has no director and got it’s budget slashed by 95%.

“That’s right: last year the White House allocated about $368m to the office, and for next year’s budget they’re only asking for about $17m,” Meyers said. “The office trying to stop the opioid epidemic is getting less than Mark Wahlberg got for Daddy’s Home 2.”