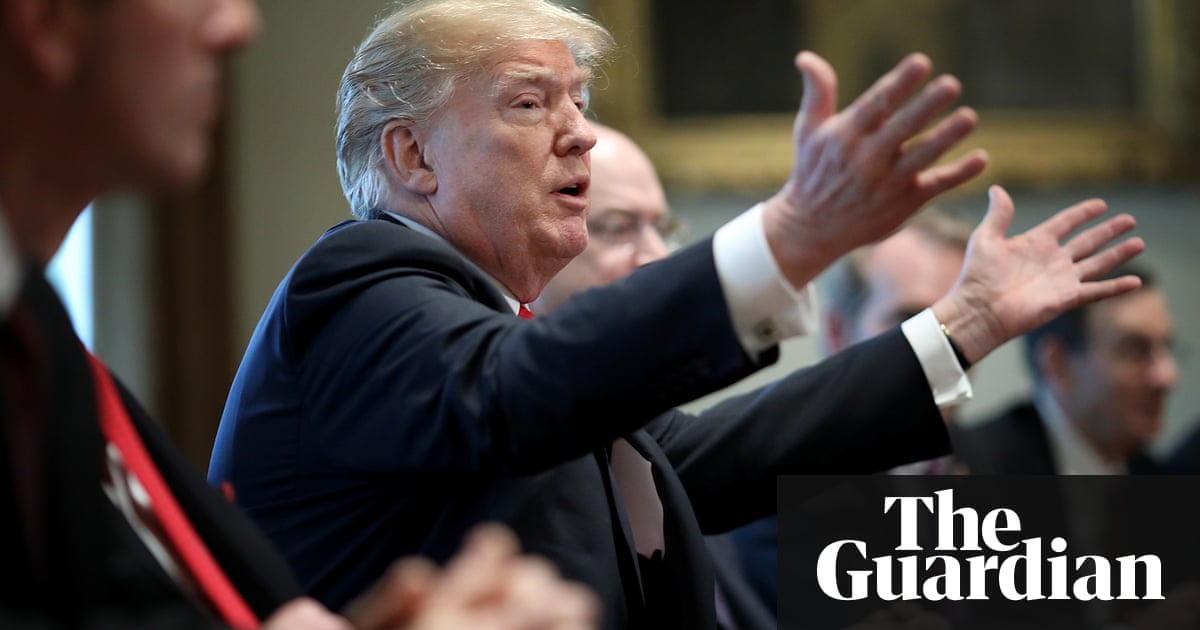 World stock markets have tumbled after Donald Trump said the United States would impose tariffs of 25% on steel imports and 10% on imported aluminum next week.

The threat of a trade war with China and higher goods prices led to a sharp sell-off in Wall Street on Thursday, causing Asian markets to take fright on Friday.

The Nikkei index in Japan fell 2.4%, Hong Kong and South Korea were down 1.6%, and the ASX200 in Sydney was off 1% in early afternoon trading. Asian steelmakers bore the brunt. South Korea’s Posco fell 3% and Japan’s Nippon Steel 4%.

Michael McCarthy of CMC Markets in Sydney said it was a “sharp reminder of the initial negative reaction to the election of Mr Trump … An explanation may come, but the initial market interpretation of the move is rank populism. The lack of structure makes anticipating further measures and possible responses to retaliatory moves difficult to predict.”

The Dow Jones Industrial Average had initially fallen more than 570 points, with heavy losses for manufacturers like Caterpillar and Boeing. The index closed down 420 points and the S&P 500 and Nasdaq both dropped on the day.

Trump campaigned on the promise of protecting the US steel industry but until now has done little to make good on those promises.

At a meeting with US industry officials at the White House, he vowed to rebuild American steel and aluminum industries, saying they had been treated unfairly by other countries for decades. The move is likely to increase tensions with China, whose top trade official, Lui He, is in Washington for trade talks.

“People have no idea how badly our country has been treated by other countries, by people representing us that didn’t have a clue,” Trump said at a White House press conference attended by executives from the steel and aluminum industries.

“Or if they did, then they should be ashamed of themselves because they’ve destroyed the steel industry, they’ve destroyed the aluminum industry, and other industries, frankly, when you look at all the plants, the car plants, automobile plants that moved down to Mexico for no reason whatsoever, except we didn’t know what we were doing. So we’re bringing it all back.”

His comments followed an early-morning tweet that said the steel and aluminum sectors needed protecting from unfair trade, which drove shares in domestic industries sharply higher.

AK Steel Holding was up 2.8%, US Steel Corp was up 2.3% and Nucor rose 1%. By contrast, industrial stocks such as Boeing fell, with traders citing tariffs which would hit manufacturers.

The administration says duties would protect US industry, but critics say they would raise costs for industry and fail to deliver on a campaign pledge to boost domestic jobs.

Trump tweeted on Thursday that American steel and aluminum companies needed “free, fair and smart trade”. Trump has indicated he favors a duty of 24% on steel imports.

The administration has also cited national security interests for its action, saying the US needs domestic supply for its tanks and warships. The Department of Defense has recommended targeted steel tariffs and a delay in aluminum duties.

Although China only accounts for 2% of US steel imports, its massive industry expansion has helped produce a global glut of steel that has driven down prices.

China has indicated it could retaliate against US steel tariffs by targeting imports of US agricultural commodities such as soybeans, of which America is the largest supplier.

Trade tensions between the US and China have risen since Trump took office in 2017 and the administration is also pushing on what it regards as forced technology transfers to China.

While American steelmakers lost three-quarters of their jobs between 1962 and 2005, a major study by the American Economic Association showed that much of this had been due to improved production technology as output per worker rose fivefold.

“Thus, even if trade protection leads to increased domestic production, increases in employment may be far less than many hope,” a report from the highly regarded independent Econofact economist network said last week.

Consumers of steel and aluminum have lobbied hard against the tariffs. Econofact said in its report that 2 million jobs were in industries that use steel “intensively”, including auto parts, household appliances, farm machinery and oil equipment.

“Across many states, the number of jobs adversely affected in these steel-using industries could far exceed any steel jobs saved,” Econofact warned.

Reuters contributed to this article