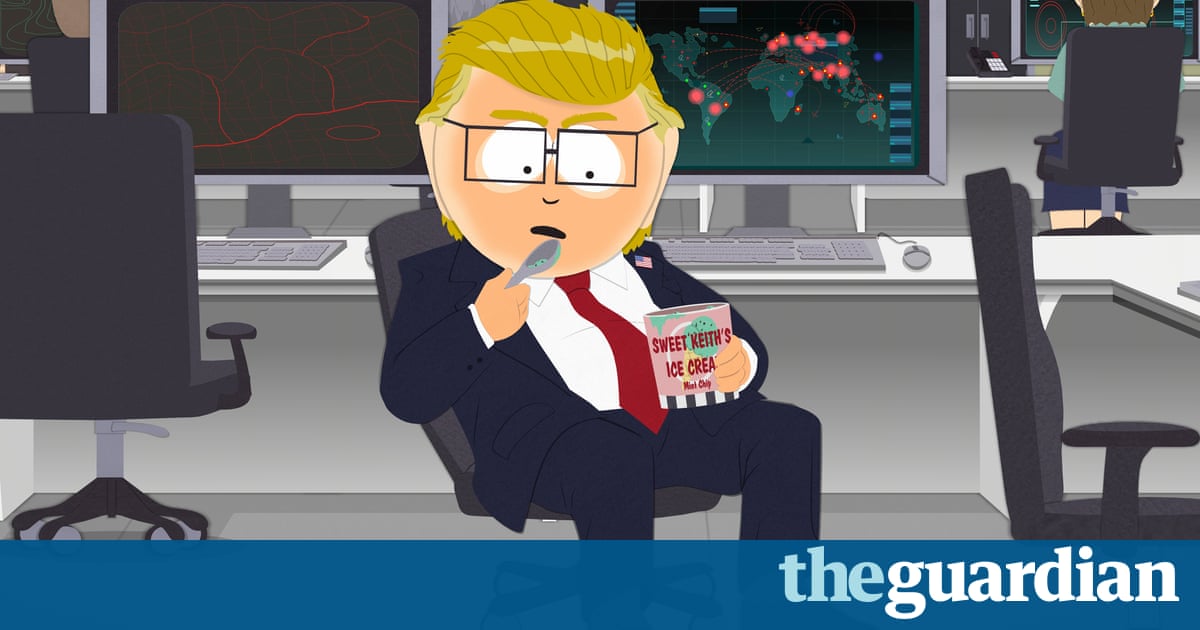 Wednesdays episode of South Park was the ninth in a season-long arc revolving around both the American presidential election and the international problem with trolling. There are two major national arcs: Mr Garrison, in Trumpian form and with Caitlyn Jenner as vice-president, has ascended to the highest office in the land assisted by an infestation of nostalgia-inducing Member Berries. The other revolves around Denmark developing a software program (Troll Trace) that will result in everyones private internet history becoming public after a Danish icon killed himself after being trolled by Kyles dad, Gerald Broflovski.

In the post-election episode, Hillary Clinton traded Gerald and his troll compatriots to the Danes and, in the interim, he was given a cellphone and told he could call one person. He called his five-year-old son, Ike, and directed him to resume his trolling to prove it wasnt him. After that plan pans out the way you might expect Gerald figures out the one thing that can help: riling everyone up against Denmark the same way that Garrison had riled up Americans to vote for him.

So Kyle and Ike head to church, where everyone is praying that theyll be saved from the inevitable release of their internet histories. Kyle and Ike demand to know why no one is willing to stand up to the Danes: Lets take a stand and try to end this. We cant let Denmark change who we are, yells Kyle, and suggests they call the president.

But they have a secret weapon: President Garrisons ex, Mr Slave. Mr Slave explains that Americans are scared of Troll Trace and the best plan is to bomb Denmark. Garrison, of course, demurs, since his advisers have explained that bombing Denmark would have broader, terrible consequences. Jesus Christ, youre such a little bitch, says Mr Slave. Youre a little bitch president, youre too scared to bomb anybody. After more puerile baiting, Garrison declares hell bomb Denmark before hanging up the phone.

Eventually, the Broflovski boys realize that their father is actually in Denmark and have to get Garrison to call it off, so Kyle calls the Pentagon. Garrison, gorging on ice cream, ignores calls from several world leaders to take Kyles call, but isnt keen to call off the bombing.

In Denmark, Gerald is strapped to a chair inside the Troll Trace headquarters, alternating between begging for mercy and trying to justify his month of being horrible to other people as satire. But one of his mini-speeches nets him some mercy: the head of Troll Trace invites him to dinner to supposedly make his case.

During their conversation in the glassed-in dining room, the head of Troll Trace reveals his ultimate plan. What if you could troll the entire world? he asks Gerald, suggesting that the ultimate troll might be someone who could rise to political power through nothing more than pushing peoples buttons and getting them riled up.

Gerald wonders why it would be funny to start a third world war. Because its freaking hilarious: getting a Scandinavian country to fight trolls by building a giant machine that actually shows everyone on Earth is a giant troll too, says the head of Troll Trace.

Then he reveals his endgame: all the naked trolls and all the Danish Troll Trace employees get treated to Rick Astley singing Never Gonna Give You Up. In the third plotline, Cartman and his girlfriend had attempted to escape Troll Trace by hitching a ride on Elon Musks SpaceX to Mars. But not only are there hordes of Americans outside the gates like a scene from The Walking Dead with the same plan, but Cartman has convinced Musk that Heidi is the funniest, smartest girl in the world and can solve SpaceXs technological problems.

Heidi has worked out the SpaceX math by replacing all the mathematical symbols with Emoji and possibly solved the secret to space travel. She runs off with the SpaceX engineers, as Cartman contemplates the end of his relationship. Back at the Broflovski household, the brothers have one final plan to save the world. Unfortunately, it involves locking their mother in the pantry, as she curses, and accessing the internet.