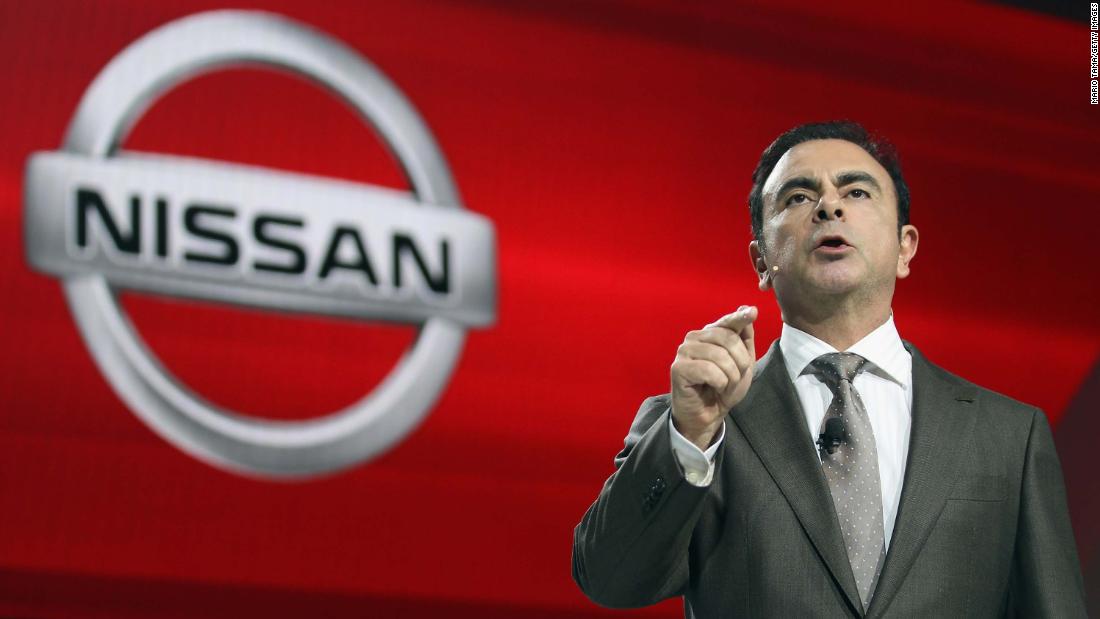 It priced the shares at 1,500 yen ($13) each, raising a total of 2.65 trillion yen ($23.5 billion), according to a regulatory filing on Monday.
Listing the mobile business is a key part of CEO Masa Son’s efforts to reposition SoftBank (SFTBY) as a global tech investor.
The transaction splits the company in two, allowing investors to choose between its mobile unit and its tech investment business. Shares in the mobile unit begin trading in Tokyo on December 19.
2. Nissan trouble: Nissan (NSANY) and its former executive Carlos Ghosn have been indicted in Japan on allegations of financial misconduct.
Shares in Nissan took a hit from the news, dropping 2.9% in Tokyo.
Tokyo prosecutors said they indicted Ghosn and Nissan for under-reporting his income over a five-year period and are investigating allegations that the practice went on for even longer.
Ghosn’s sudden downfall began when he was arrested last month. He has since been ousted as chairman of Nissan and Mitsubishi Motors (MMTOF) and temporarily replaced as head of France’s Renault (RNSDF).
3. Huawei and markets: Investors are watching for trade fallout after the arrest of a top Chinese tech executive wanted by the United States.
The detention of Huawei CFO Meng Wanzhou in Canada has put a new strain on the tense relationship between Washington and Beijing just as the two sides are trying to negotiate an end to their damaging trade war.
The Chinese Foreign Ministry said over the weekend that it has summoned the US and Canadian ambassadors to address the arrest, which it described as “lawless, reasonless and ruthless.”
Much rides on the outcome of Meng’s bail hearing, which continues Monday in Canada.
US stock futures were lower. European markets opened with losses, following the trend set in Asia. Investors moved into safe haven assets including the Japanese yen.
“Hopes of fruitful trade negotiations have taken a beating since the optimism that was around a week ago when the Buenos Aires G20 meeting prompted hope of a rally into the end of the year for equities,” said Kit Juckes, a strategist at Societe Generale.
The Dow closed down 2.2% on Friday, bringing its total loss for the week to 4.5%. The S&P 500 shed 2.3% and the Nasdaq slumped 3.1%.
Before the Bell newsletter: Key market news. In your inbox. Subscribe now!
4. Earnings and economics: Stitch Fix (SFIX) will release earnings after the close.
Japan’s economy contracted at an annualized rate of 2.5% in the third quarter, according to new data. The slump was much worse than the previous estimate of a 1.2% contraction.
French President Emmanuel Macron is expected to address the nation after a fourth weekend of protests. France’s central bank slashed its quarterly growth estimate to 0.2% from 0.4% compared to the previous three months.
5. Coming this week:
Monday — Stitch Fix (SFIX) earnings
Tuesday — Parliament votes on Theresa May’s Brexit deal; Google CEO Sundar Pichai testifies before Congress; PPI report
Wednesday — CPI report
Thursday — Adobe (ADBE) and Costco (COST) earnings
Friday — US retail sales data