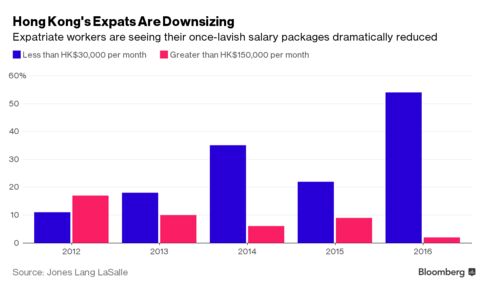 Expat housing packages are so 2012.

Long the golden privilege of the Hong Kong-based finance and banking crowd in Asia, the days of guaranteed housing allowances fat enough to rent a 4,000-square-foot harbor-view home on the Peak or a townhouse in exclusive Repulse Bay for HK$300,000 ($38,650) a month are gone. That perk is being slashed or eliminated, forcing expatriate finance types to give up marble Jacuzzis, private gardens and killer views in exchange for something humbler. And its putting a damper on the luxury rental market.

We are seeing more downsizing, said Maureen Mills, managing director of Executive Homes Hong Kong Ltd., a boutique real estate agency that works with law firms. Partners used to have company leases and were happy to spend HK$150,000. Now with cash packages they are more comfortable at HK$80,000 to HK$100,000.

In the first quarter of this year, only 7 percent of Jones Lang LaSalle Inc.s expat real estate clients in Hong Kong were given monthly rental budgets of more than HK$100,000, down from 31 percent in 2012. Now, 54 percent of clients make do with less than HK$30,000 a monthenough for about two small bedrooms squished into 550 square feet in Central districtcompared with 11 percent four years ago.

The number of finance clients with corporate packages moving to Hong Kong through JLL has halved, said Stella Abraham, head of the firms Hong Kong residential leasing and relocation services for companies including Citigroup Inc. and JPMorgan Chase & Co.

The downsizing trend is occurring against the backdrop of Hong Kongs biggest property correction since the severe acute respiratory syndrome, or SARS, epidemic of 2003. After climbing 370 percent until their September peak, housing prices have since fallen about 14 percent. Analysts are predicting further declines of as much as 25 percent this year, which in turn will affect rents as leases come up for renewal.

Five years ago, when expat housing allowances were paid on a use it or lose it basis, agents had plenty of clients willing to spend as much as HK$300,000 a month. Now company-paid leases are out, and while salaries are adjusted to partially offset the missing housing allowances, employees no longer have an incentive to spend a kings ransom on rent. Now they are more likely to content themselves with a two-bedroom, 1,320-square-foot apartment at the Hong Kong Parkview at HK$88,000 a month.

Not as humbling as losing your job. Cuts by international banking and finance firms have also reduced the pool of people willing to pay six-figure monthly rents. Since the beginning of the year, Barclays Plc has eliminated hundreds of positions in Hong Kong, while dozens have been let go at Bank of America Corp. and BNP Paribas SA.

Even on reduced budgets, expats still enjoy a lifestyle beyond the wildest imagination for the rest of Hong Kong, where the average monthly household income is about HK$24,800, about 46 percent of people live in public housing, and the city ranks as the most unaffordable housing market in the world, according to the annual Demographia International Housing Affordability Survey.

There has been an effect, said Irene Lee, chairman of Hysan Development Co., which leases out flats at the luxury Midlevels development Bamboo Grove, where rents start at HK$35,000 for a one-bedroom apartment. There is a decline in the number of expats and in their packages.

Worst-affected are high-end properties like The Mount Austin atop Victoria Peak. A few years ago, landlord Nan Fung Development had no trouble finding expats willing to shell out HK$280,000 a month for a 3,787-square-foot-duplex. Today, however, property agents say theyre lucky to even get interest, let alone find tenants. Its the same at Cheuk Nang Lookout, whose 3,362 square feet on the Peaks Severn Road come with a monthly asking price of HK$320,000. It boasts a marble Jacuzzi, three terraces and a garden. Its been vacant for two years.

After more than a decade of steady rental increases, luxury landlords are now looking at reductions of as much as 30 percent for properties at the very top of the market, Lam said. Some developers are also quietly providing other inducements, such as a month free.

Its increasingly common for companies to replace expat packages with quasi-local ones that include a subsidy for housing. These permanent transfer relocations for a middle manager position might include HK$30,000 for a single person and HK$70,000 for a family, said Lee Quane, regional director at human resources consultancy ECA International Ltd.

To be sure, some top non-banking international executives still arrive in Hong Kong on full expat packages with housing allowances as high as HK$300,000, paid tuition for their kids schools, and guaranteed repatriation after two or three years. Those include international fashion houses and global multinational corporations.

You do see downsizing, but houses on the Peak still have people, said Harry ONeill, partner in the chief executive officer and board practice at recruitment firm Heidrick & Struggles International Inc. They just arent bankers.”

Joshua Wong, the student who risked the wrath of Beijing: ‘It’s about turning the impossible into the possible’