After excerpts from Comeys new book said the president was untethered to truth, Trump tweets: James Comey is a proven LEAKER &amp; LIAR 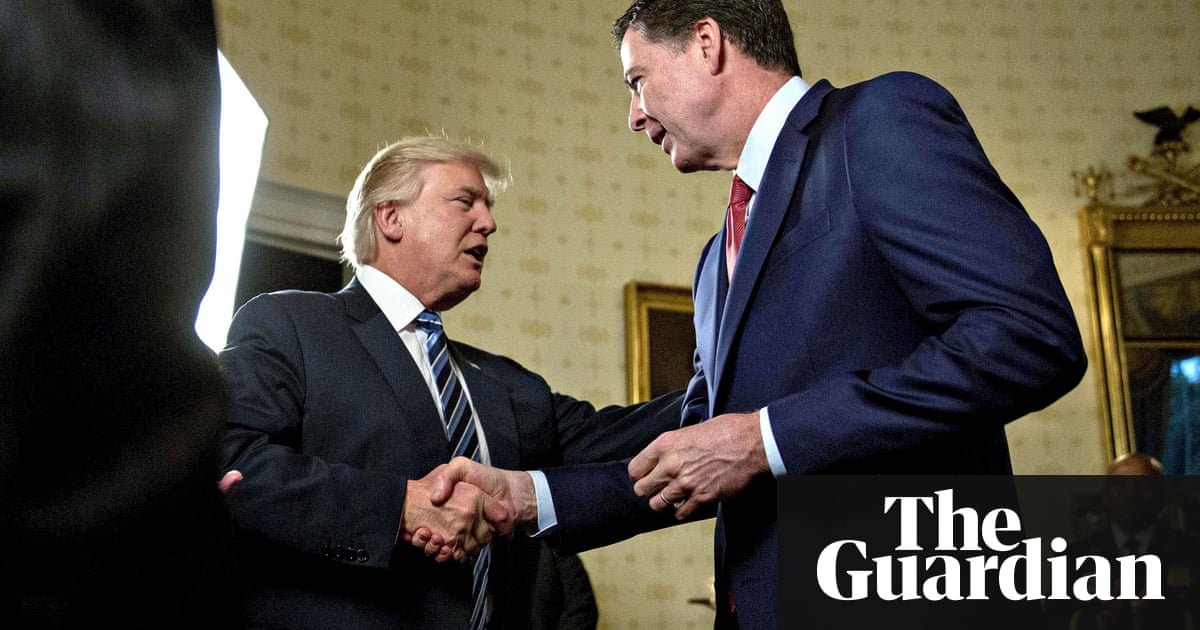 Donald Trump declared James Comey “a weak and untruthful slime ball” on Friday in response to a new book, in which the former director of the FBI caricatures him as a mafia don, and claimed: “It was my great honor to fire James Comey!”

“James Comey is a proven LEAKER & LIAR,” the president tweeted. “Virtually everyone in Washington thought he should be fired for the terrible job he did – until he was, in fact, fired.”

But history may not be rewritten quite so fast.

As rage poured forth from the White House an elaborate rollout campaign for Comey’s memoir pressed on, with the release of a television clip on Friday in which Comey recounted having to brief the president on an intelligence report alleging that Trump had consorted with prostitutes in Moscow.

The president’s reaction, according to Comey: “Do I look like a guy who needs hookers?”

Scenes such as those fill A Higher Loyalty: Truth, Lies and Leadership, a copy of which was obtained by the Guardian on Thursday. The book goes on sale on Tuesday, and Comey’s first television interview, with ABC News, is to be broadcast on Sunday, with a national author tour to follow.

Judging by Trump’s obliging Twitter outburst on Friday morning – and his even angrier tweet that afternoon claiming: “No collusion, all made up by this den of thieves and lowlifes!” – the book seems likely to make good on Comey’s desire for a showdown with the president, a clash with few precedents and unknowably wide implications.

Comey and Trump will not be the only participants. “Your kakistocracy is collapsing after its lamentable journey,” tweeted John Brennan, a former CIA director, in reply to Trump’s post about the ex-FBI chief. The word means government by the worst people.

On the other side, White House press secretary Sarah Sanders told her regular press briefing: “The American people see right through the blatant lies of a self-admitted leaker.”

She added: “Comey will be forever known as a disgraced partisan hack. One of the president’s greatest achievements will go down as firing James Comey.”

A Washington Post-ABC News poll timed to the release of Comey’s book found that Americans thought Comey “more believable” than Trump by a 48-32 margin.

And fact-checkers pointed out that contrary to Trump’s claim about Comey’s reputation, Comey was broadly popular among the FBI rank-and-file, which reacted to the director’s firing in May 2017 with shock and disbelief.

Yet the reappearance of Comey may rank only second as the most threatening development for Trump’s presidency this week, following the raid by FBI agents on Monday of an office, residence and hotel room tied to Michael Cohen, Trump’s longtime trusted lieutenant.

A lawyer for Trump was in court in New York on Friday to ask a judge to let the president object to the disclosure of some of the records seized from Cohen.

Behind the raids on Cohen lurked the power of the special counsel, Robert Mueller, whose pressure on the president has grown so strong that Trump is once again flirting openly with the idea of removing Mueller, or Mueller’s boss, the deputy attorney general, Rod Rosenstein, or both.

Most analysts believe that such a step would only deepen Trump’s troubles – the firing of Comey is exhibit A – but such analysis may hold little sway if Trump shares any of the rashness and lack of self-control of the man described by Comey in his book.

In the preview television clip aired on Friday, Comey was merciless in depicting the president’s insecurity and cravenness.

Trump, according to Comey, was bothered that his wife, Melania Trump, might believe allegations in a dossier compiled by the former British spy Christopher Steele that he, Trump, had been in a Moscow hotel room with urinating prostitutes, Comey said.

“He said, you know, ‘If there’s even a 1% chance my wife thinks that’s true, that’s terrible’,” said Comey. “‘And I remember thinking, ‘How could your wife think there’s a 1% chance you were with prostitutes peeing on each other in Moscow?’

“I’m a flawed human being, but there is literally zero chance that my wife would think that was true. So, what kind of marriage to what kind of man does your wife think there’s only a 99% chance you didn’t do that?”

Asked if he believed Trump’s denial, Comey said: “I honestly never thought these words would come out of my mouth, but I don’t know whether the current president of the United States was with prostitutes peeing on each other in Moscow in 2013.

Comey was also asked if he should have told Trump that the Steele dossier contained research partly funded by Democrats. “I don’t know the answer to that,” he replied. “It wasn’t necessary for my goal, which was to alert him that we had this information.”

In places in the book, Comey seems to lay traps for the notoriously thin-skinned president, who is known for making specious claims about vote tallies and crowd sizes despite the facts and long after the fact.

Trump “appeared shorter than he seemed on a debate stage with Hillary Clinton”, Comey writes of their first meeting.

He adds of Trump: “His face appeared slightly orange, with bright white half-moons under his eyes where I assume he placed small tanning goggles, and impressively coiffed, bright blond hair, which on close inspection looked to be all his. I remember wondering how long it must take him in the morning to get that done.”

But the theme Comey favors most in the book is that of Trump as mobster. In this, the lawman knows whereof he speaks, having led prosecutions of major mob figures earlier in his career.

“As I found myself thrust into the Trump orbit, I once again was having flashbacks to my earlier career as a prosecutor against the mob,” Comey writes. “The silent circle of assent. The boss in complete control. The loyalty oaths. The us-versus-them worldview. The lying about all things, large and small, in service to some code of loyalty that put the organization above morality and the truth.”

Of Trump’s now famous demand over dinner at the White House in January 2017, “I need loyalty”, Comey writes: “To my mind, the demand was like Sammy the Bull’s Cosa Nostra induction ceremony – with Trump in the role of the family boss, asking me if I have what it takes to be a ‘made man’.”