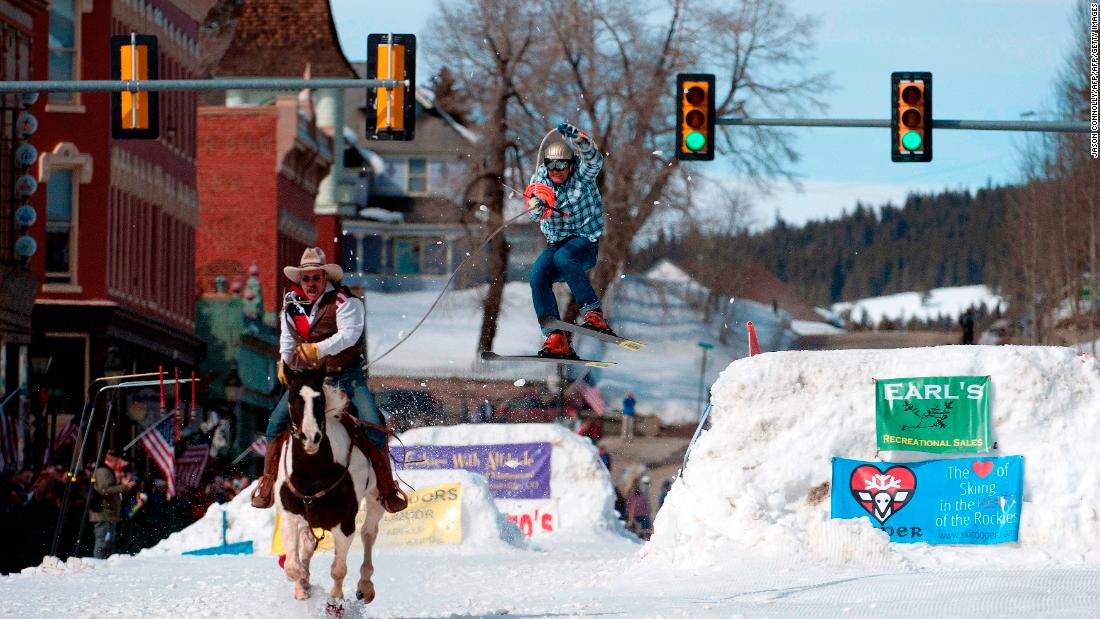 (CNN)In a quiet, snowy town in the Rocky Mountains, a man, strapped onto skis, grips tightly to a set of reins.

What’s about to happen is an adrenaline rush like no other. Before him, a horse and rider are primed for action, ready to charge round a custom-made course with the skier in their wake.
To some it may look terrifying; to others, exhilarating. Most, however, won’t have seen anything like it before in their lives.
Follow @cnnsport
This unlikely trio of horse, rider, and skier, which can reach speeds of up to 40 mph, have been brought together by the sport of skijoring.
For Aaron Griffen, the scene is a familiar one. He’s the current American champion and a regular face on the skijoring circuit in the US.
Once hopeful of competing in the US ski team, Griffen discovered the sport in 2016 and, after winning the first event he entered, hasn’t looked back.
“I was originally an alpine skier,” Griffen tells CNN. “I raced competitively for probably ten years. I also have a horseman background and know a lot of people that are involved in horses.
“It was actually a friend of mine who contacted me saying that she wanted to try it out and needed a skier … we tried it and haven’t stopped since.” 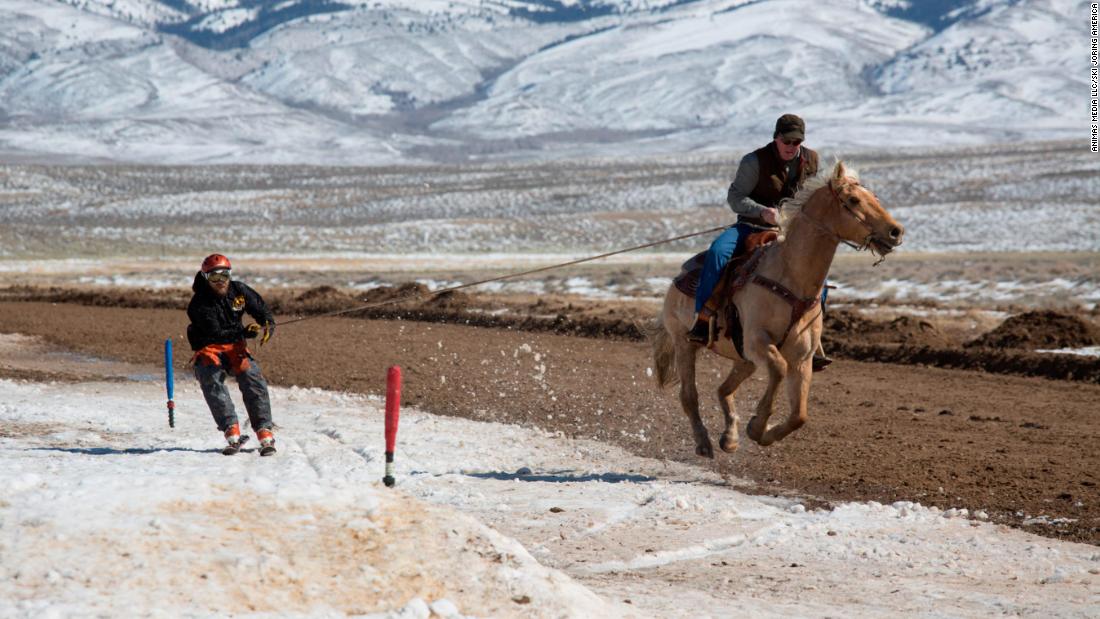 ‘Another notch on the trophy’

Competitive, western-style skijoring in the US has its origins in Leadville, Colorado. Originally a slow-paced spectacle for winter carnivals, it wasn’t until the 1950s that it was transformed into a race, and the 1990s that the modern era of the sport was born.
In essence, skijoring is a time trial. Races take place either on round or straight tracks that include jumps, gates, and, on occasion, rings that are collected on the way round. If any of these are missed, time penalties are incurred.
Western-style skijoring is just one version of the sport; others exist without riders — most famously in St. Moritz, Swtizerland — and with dogs instead of horses.
Griffen, who also works as an excavator, competed in 11 events last year. 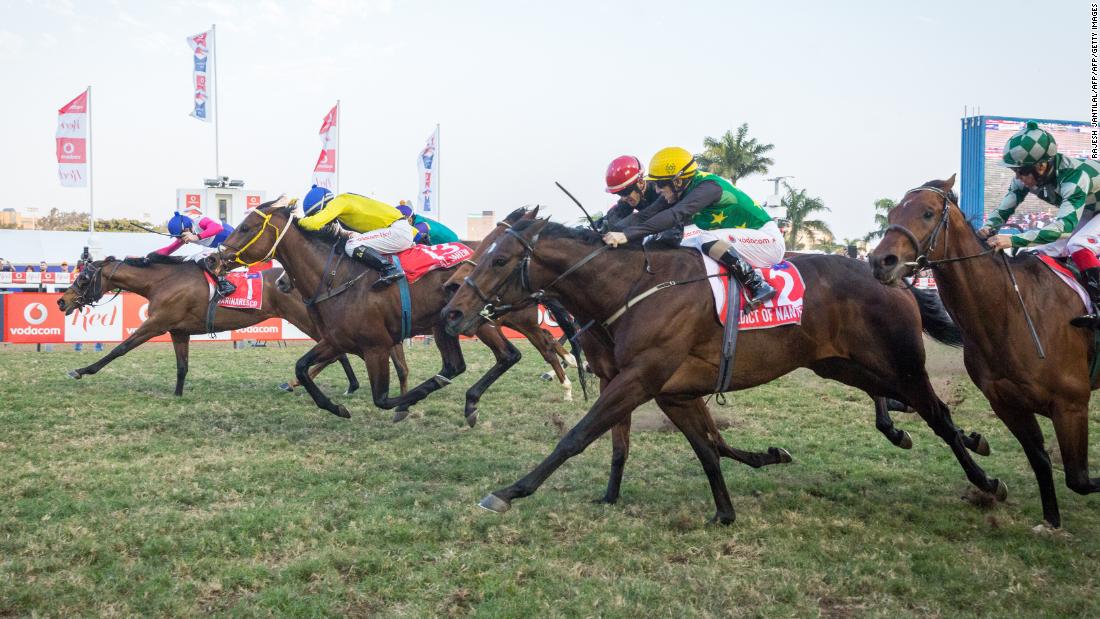 “Most funding comes out of pocket. I did have a small sponsor last year,” he explains.
“I do still go back to my other job here and there [during the winter months] — skijoring is strictly weekends.”
Outside the competitive races organized by the SJA (Ski Joring America), Griffen confesses he hardly practices at all.
“I’ve probably practiced maybe twice in the past three years outside competition. It’s got kind of a backyard, tailgating, BBQ kind of feel to it. It’s just a fun event to go to.
“A lot of the competitors are the same every weekend, that travel around. We pick up some locals here and there, but for the majority, everyone knows each other.
“The goal this year is to get another notch on the trophy.” 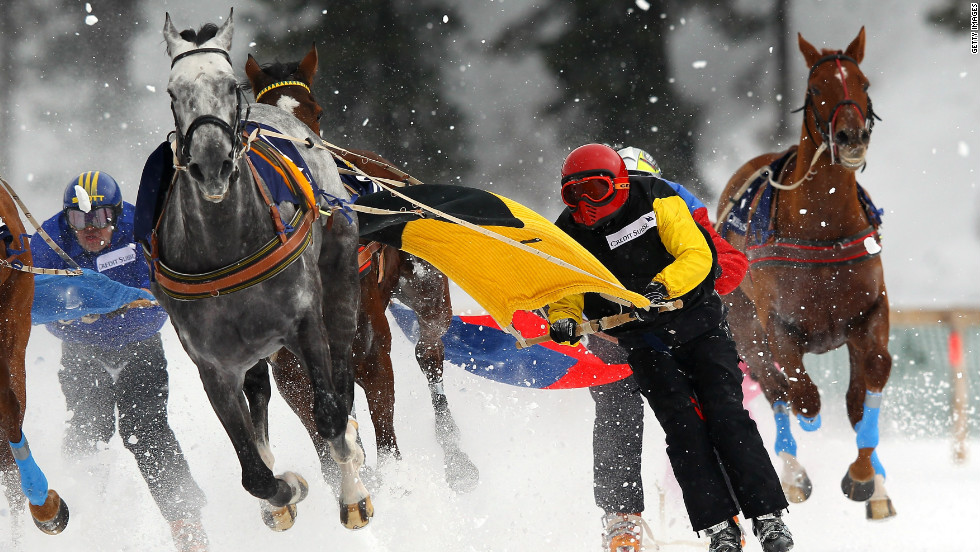 While Griffen admits his skiing background doesn’t make the speed something he fears, for newcomers to the sport, the sudden acceleration as the horse lurches out the starting blocks takes some getting used to.
Injuries happen, though Matt Crossett, board president of the SJA, assures that they’re not as common as you might think.
“The most important thing for a skier is the start, learning not to get jerked by the horse because when the horse goes, it goes hard.
“In the last two years, we’ve had two people who have been injured, some of them more seriously than others. We had a skier tear her ACL because she came off a jump wrong, and there was another skier who dislocated his shoulder and was unconscious for a few minutes coming off a jump.
“But this is few and far between … It can happen, but I’d say it’s pretty rare.
“The biggest priority for us is keeping the horses safe because they don’t have a voice. We take a lot of extreme measures to make sure the horses are safe.” 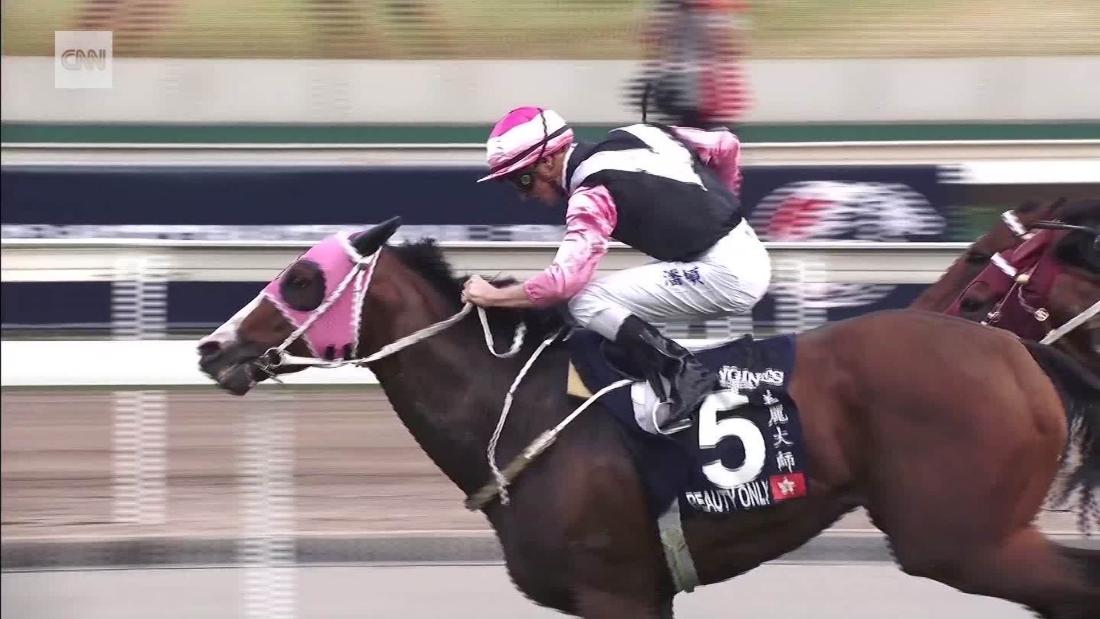 The $238M horse races that keep on giving

Crossett acknowledges that it’s a technical sport. The most successful trios thrive on chemistry between horse, rider and skier, and it’s for this reason that Griffen tries to stick with the same rider, his friend Ebbie Hansen.
While Griffen forms part of a group of about 50 who are regular faces on the skijoring circuit, the sport is open for all with specific competitions for novices.
Prize purses of $25,000 are up for grabs at the most prestigious courses in Ridgeway, Colorado, and Bozeman, Montana — taking home $4,000 from a single event is “pretty darn high,” according to Crossett.
“All the towns that put it on want to boost their economy … Some do it right down the main street in their town. Often it’s part of a bigger winter carnival. It’s a good time to get out and have some fun in the snow.”
“It’s a great mix [of people competing]. You have everything from bucket-listers who just want to come and try, to kids, to teens, to ex-ski racers and Olympics athletes.
“It really is a sport for everybody.”
Visit cnn.com/winningpost for more news and videos
For anyone tempted to tick it off their bucket list: hold tight.