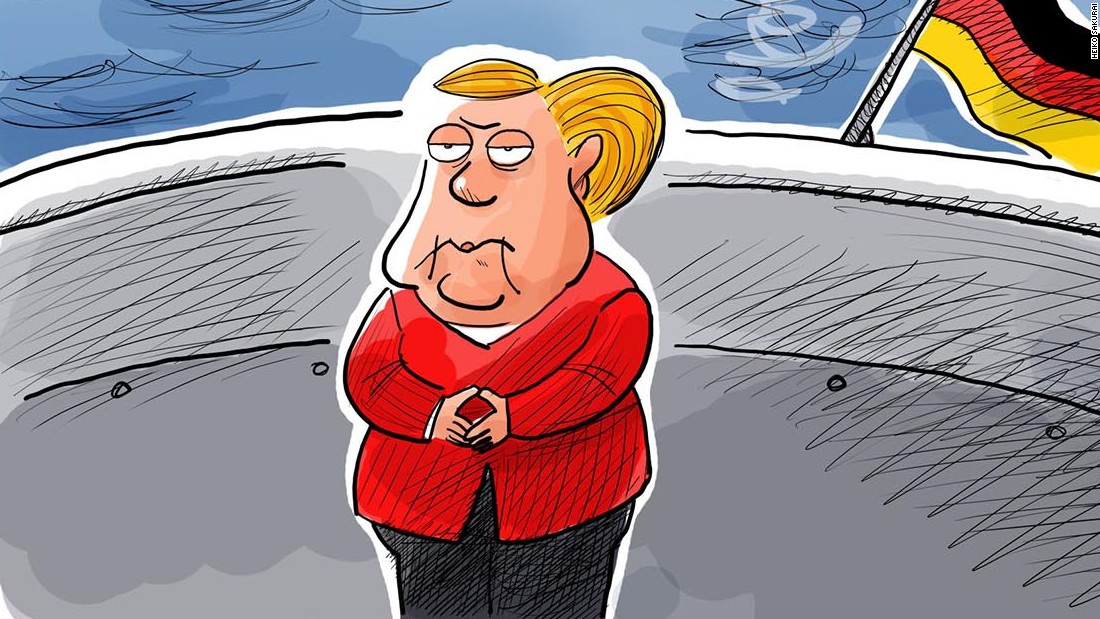 Cologne, Germany (CNN)Over the past decade, Heiko Sakurai has watched as Angela Merkel’s face, posture, and even her trademark diamond-shaped hand gesture changed.

“She is not vain. She is calm. She is a bit distant,” Sakurai told CNN from his small studio in Cologne. “She is Mummy: you can rely on her.”
That’s why he thinks German voters will choose Merkel again in next week’s national elections.
Sakurai has a set routine: he reads the newspapers with his morning coffee — “paper newspapers,” he insists — then drops his son off at kindergarten before returning home to start work.
He draws three or four cartoons most days, then selects one or two to refine before submitting them to a number of German newspapers, including Berliner Zeitung, Westdeutsche Allgemeine Zeitung, and Kölner Stadt-Anzeiger.
The selections below shed light on how Merkel — and the artist’s view of her — has evolved.

Merkel and her mentor

One of Sakurai’s earliest drawings of Merkel is from 2005, five years after she took over the Christian Democratic Union party from her mentor, former Chancellor Helmut Kohl.
In the cartoon, Kohl’s famously large frame looms over Merkel as he says, “You have my respect, girl. Slowly, now. You are starting to make me nervous.” Merkel sits behind a desk with a master plan to become Chancellor laid out before her, a devious smile twisted across her face.
“She was called ‘Kohl’s girl’,” Sakurai recalled, “because she was a bit shy and nobody knows her from East Germany. She was not a real politician, she was a scientist.”
“Normally, if you see her face she seems to be a bit harmless,” he said. “But she’s a clever person and she can become dangerous, pushing her rivals out of the way. She must be, otherwise you can’t reach the highest position.”
Merkel would be sworn in as Chancellor later in 2005.

In a 2015 cartoon, Sakurai portrayed Merkel as the Statue of Liberty, holding a sign saying “We can do it!” and standing on a podium with the inscription “Give me your tired, your poor, your huddled masses.”
For Sakurai, Merkel’s decision to allow nearly a million refugees into Germany in 2015 has defined her leadership.
“It was a big surprise how she acted in the climax of the refugee crisis,” Sakurai said, “because she sometimes has the tendency to do what she thinks the majority would like to.”
In the corner of the drawing is the politician Horst Seehofer, one of the most vocal critics of Merkel’s open door policy.
“Seehofer said she was destroying the country’s freedom. It was really hard stuff, you couldn’t believe it,” Sakurai recalled. “It was like a war between them and that’s reflected in the cartoons.”
Sakurai also chose to depict the incoming refugees with footsteps, rather than people, to show that Merkel’s decision had created “facts on the ground” that could not be reversed.

One of Sakurai’s cartoons from earlier this year also featured the Statue of Liberty, but with a very different world leader on its pedestal: US President Donald Trump with his pants down, giving a stony-faced Merkel a full view of his backside.
“I think there is no bigger difference possible in characters than between Trump and Merkel,” Sakurai said. “He is a man of strong opinion, he is loud, sometimes not very rational. And she is the exact opposite.”
Sakurai drew the cartoon after watching Trump and Merkel interacting at the G7 summit in May, when Trump lambasted NATO allies and labeled Germany “very bad” on trade.
After the summit, Merkel said that “the times when we could completely rely on others are, to an extent, over.”
“She meant, of course, the US,” Sakurai said. “And this is how my cartoon was created. It was in that situation.”
“That was the picture I had in my mind. It is not the classical picture of coming to New York, like the refugees, like the Jews from Germany being free,” he explained. “This is seeing Lady Liberty and feeling: This is our partner.”

Merkel as the Queen

In June, Sakurai drew a cartoon of Merkel seated on a throne, dressed like Britain’s Queen Elizabeth, who delivered a speech to open parliament on the same day that election campaigning began in Germany.
Sakurai said it was intended to show “the position of Merkel on a cloud above all the quarrels between parties. Which is an advantage of course. The disadvantage is that she is losing maybe the contact to people and to real problems.”
The key to drawing Merkel, Sakurai said, is in the eyes.
“Her eyes are very important. In former times, I thought her eyes a bit closed meant she is a bit sleepy, a bit shy, but meanwhile I know it is her rationality.”
In the cartoon, Merkel announces her campaign approach: “I am planning to remain vague and aloof and to somehow wiggle my way to win the elections.”
Sakurai said this was typical of Merkel’s campaign style.
“It is not a quarrel, it is not loud, it is not a real discussion,” he explained. “It is just being calm, doing your job, don’t talk too much about your opponent, don’t give him the possibility to attack, don’t attack yourself.”
“This is how she won three elections, and that is how she will win the fourth also.”
Correction: This story has been updated to reflect the newspapers Heiko Sakurai submits his cartoons to.