The Long Read: Suffering is difficult to describe and impossible to see. So how can doctors tell how much it hurts? 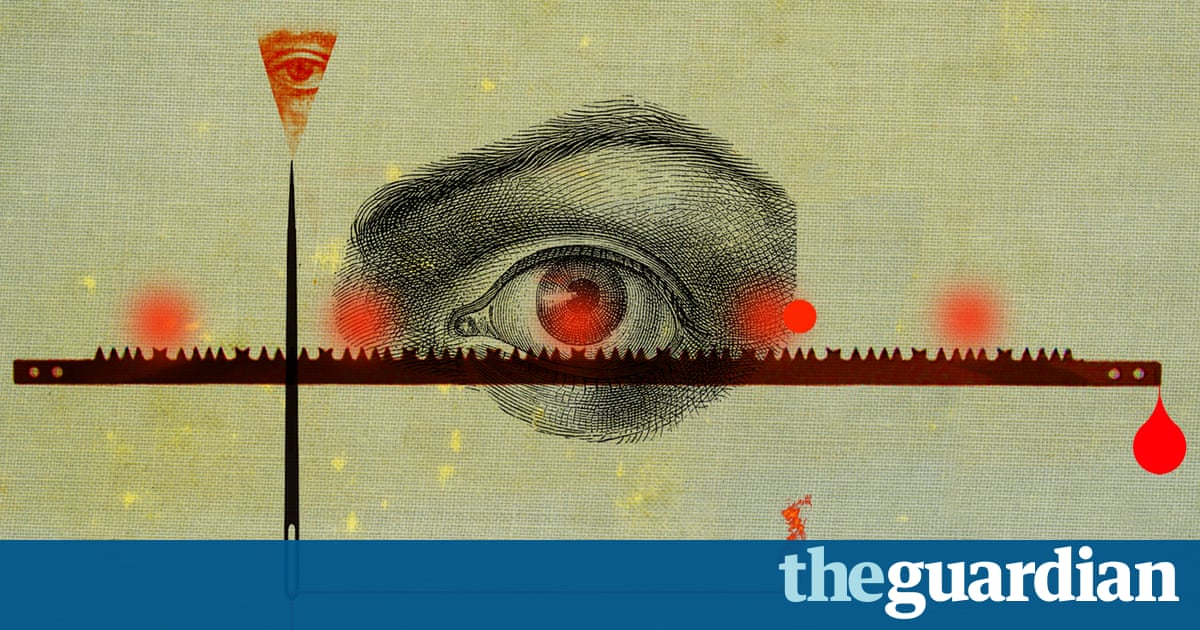 One night in May, my wife sat up in bed and said, Ive got this awful pain just here. She prodded her abdomen and made a face. It feels like somethings really wrong. Woozily noting that it was 2am, I asked what kind of pain it was. Like somethings biting into me and wont stop, she said.

Hold on, I said blearily, help is at hand. I brought her a couple of ibuprofen with some water, which she downed, clutching my hand and waiting for the ache to subside.

An hour later, she was sitting up in bed again, in real distress. Its worse now, she said, really nasty. Can you phone the doctor? Miraculously, the family doctor answered the phone at 3am, listened to her recital of symptoms and concluded, It might be your appendix. Have you had yours taken out? No, she hadnt. It could be appendicitis, he surmised, but if it was dangerous youd be in much worse pain than youre in. Go to the hospital in the morning, but for now, take some paracetamol and try to sleep.

Barely half an hour later, the balloon went up. She was awakened for the third time, but now with a pain so savage and uncontainable it made her howl. The time for murmured assurances and spousal procrastination was over. I rang a local minicab, struggled into my clothes, bundled her into a dressing gown, and we sped to St Marys Paddington at just before 4am.

The flurry of action made the pain subside, if only through distraction, and we sat for hours while doctors brought forms to be filled, took her blood pressure and ran tests. A registrar poked a needle into my wifes wrist and said, Does that hurt? Does that? How about that? before concluding: Impressive. You have a very high pain threshold.

The pain was from pancreatitis, brought on by rogue gallstones that had escaped from her gall bladder and made their way, like fleeing convicts, to a refuge in her pancreas, causing agony. She was given a course of antibiotics and, a month later, had an operation to remove her gall bladder.

Its keyhole surgery, said the surgeon breezily, so youll be back to normal very soon. Some people feel well enough to take the bus home after the operation. His optimism was misplaced. My wife came home the following day filled with painkillers. When they wore off, she writhed with suffering. After three days she rang the specialist, only to be told: Its not the operation thats causing discomfort its the air that was pumped inside you to separate the organs before surgery. Once the operation had proved a success, the surgeons had apparently lost interest in the fallout.

During that period of convalescence, as I watched her grimace and clench her teeth and let slip little cries of anguish until a long regimen of combined ibuprofen and codeine finally conquered the pain, several questions came into my head. Chief among them was: Can anyone in the medical profession talk about pain with any authority? From the family doctor to the surgeon, their remarks and suggestions seemed tentative, generalised, unknowing and potentially dangerous: Was it right for the doctor to tell my wife that her level of pain didnt sound like appendicitis when the doctor didnt know whether she had a high or low pain threshold? Should he have advised her to stay in bed and risk her appendix exploding into peritonitis? How could surgeons predict that patients would feel only discomfort after such an operation when she felt agony an agony that was aggravated by fear that the operation had been a failure?

I also wondered if there were any agreed words that would help a doctor understand the pain felt by a patient. I thought of my father, a GP in the 1960s with an NHS practice in south London, who used to marvel at the colourful pain symptoms he heard: Its like Ive been attacked with a stapler; Like having rabbits running up and down my spine; Its like someones opened a cocktail umbrella in my penis Few of them, he told me, corresponded to the symptoms listed in a medical textbook. So how should he proceed? By guesswork and aspirin?

There seemed to be a chasm of understanding in human discussions of pain. I wanted to find out how the medical profession apprehends pain the language it uses for something thats invisible to the naked eye, that cant be measured except by asking for the sufferers subjective description, and that can be treated only by the use of opium derivatives that go back to the middle ages.

When investigating pain, the basic procedure for clinics everywhere is to give a patient the McGill pain questionnaire. Developed in the 1970s by two scientists, Dr Ronald Melzack and Dr Warren Torgerson, both of McGill University in Montreal, it is still the main tool for measuring pain in clinics worldwide.

Melzack and his colleague Dr Patrick Wall of St Thomas Hospital in London had already galvanised the field of pain research in 1965 with their seminal gate control theory, a ground-breaking explanation of how psychology can affect the bodys perception of pain. In 1984, the pair went on to write Wall and Melzacks Textbook of Pain, the most comprehensive reference work in pain medicine. It has gone through five editions and is currently more than 1,000 pages long.

In the early 1970s, Melzack began to list the words patients used to describe their pain and classified them into three categories: sensory (which included heat, pressure, throbbing or pounding sensations), affective (which related to emotional effects, such as tiring, sickening, gruelling or frightful) and lastly evaluative (evocative of an experience from annoying and troublesome to horrible, unbearable and excruciating).

You dont have to be a linguistic genius to see there are shortcomings in this range of terms. For one thing, some words in the affective and evaluative categories seem interchangeable theres no difference between frightful in the former and horrible in the latter, or between tiring and annoying and all the words share an unfortunate quality of sounding like a duchess complaining about a ball that didnt meet her standards.

But Melzacks grid of suffering formed the basis of what became the McGill pain questionnaire. The patient listens as a list of pain descriptors is read out and has to say whether each word describes their pain and, if so, to rate the intensity of the feeling. The clinicians then look at the questionnaire and put check marks in the appropriate places. This gives the clinician a number, or a percentage figure, to work with in assessing, later, whether a treatment has brought the patients pain down (or up).

A more recent variant is the National Initiative on Pain Controls pain quality assessment scale (PQAS), in which patients are asked to indicate, on a scale of 1 to 10, how intense or sharp, hot, dull, cold, sensitive, tender, itchy, etc their pain has been over the past week.

The trouble with this approach is the imprecision of that scale of 1 to 10, where a 10 would be the most intense pain sensation imaginable. How does a patient imagine the worst pain ever and give their own pain a number? Some men may find it hard to imagine anything more agonising than toothache or a tennis injury. Women who have experienced childbirth may, after that experience, rate everything else as a 3 or 4.

I asked some friends what they thought the worst physical pain might be. Inevitably, they just described nasty things that had happened to them. One man nominated gout. He recalled lying on a sofa, with his gouty foot resting on a pillow, when a visiting aunt passed by; the chiffon scarf she was wearing slipped from her neck and lightly touched his foot. It was unbearable agony.

A brother-in-law nominated post-root-canal toothache unlike muscular or back pain, he said, it couldnt be alleviated by shifting your posture. It was relentless. A male friend confided that a haemorrhoidectomy had left him with irritable bowel syndrome, in which a daily spasm made him feel as if somebody had shoved a stirrup pump up my arse and was pumping furiously. The pain was, he said, boundless, as if it wouldnt stop until I exploded. A woman friend recalled the moment the hem of her husbands trouser leg snagged on her big toe, ripping the nail clean off. She used a musical analogy to explain the effect: Id been through childbirth, Id broken my leg and I recalled them both as low moaning noises, like cellos; the ripped-off nail was excruciating, a great, high, deafening shriek of psychopathic violins, like nothing Id heard or felt before.

It seems a shame that these eloquent descriptions are reduced by the McGill questionnaire to words like throbbing or sharp, but its function is simply to give pain a number a number that will, with luck, be decreased after treatment, when the patient is reassessed.

This procedure doesnt impress Professor Stephen McMahon of the London Pain Consortium, an organisation formed in 2002 to promote internationally competitive research into pain. There are lots of problems that come with trying to measure pain, he says. I think the obsession with numbers is an oversimplification. Pain is not unidimensional. It doesnt just come with scale a lot or a little it comes with other baggage: how threatening it is, how emotionally disturbing, how it affects your ability to concentrate. The measuring obsession probably comes from the regulators who think that, to understand drugs, you have to show efficacy. And the American Food and Drug Administration dont like quality-of-life assessments; they like hard numbers. So were thrown back on giving it a number and scoring it. Its a bit of a wasted exercise because its only one dimension of pain that were capturing.