Some people are just awful, and the more attention we give them or write about them, as Dave Schilling admits the more they will act out. So lets stop already 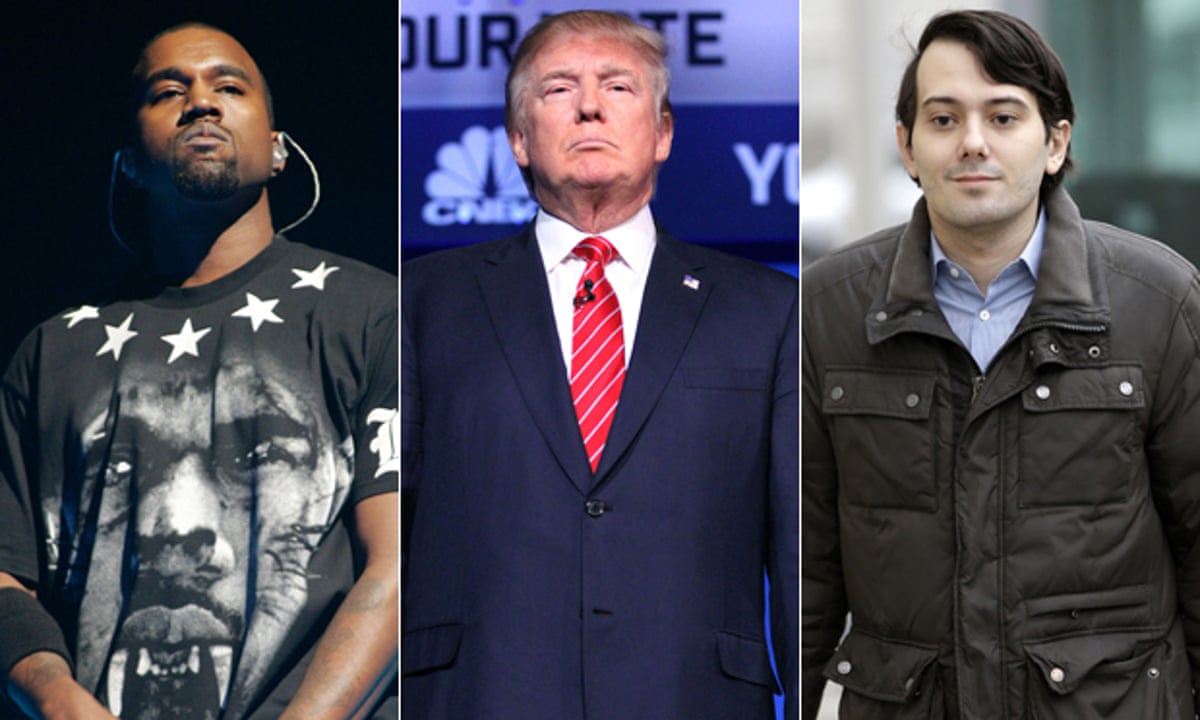 Churlish, smirking assface Martin Shkreli is back at it again, and no one is happy about it.

Yesterday, Shkreli offered fellow bleating twit Kanye West $10m for the exclusive listening rights to Wests imminent album The Life of Pablo, despite facing fraud charges and not having a job with which to earn a proper income to pay for it. If Shkreli is successful in duping West into selling him the album exclusively, no one else can listen to it except for Martin Shkreli. West would have to immediately cancel plans to release the record and hand over a single, solitary copy to Shkreli, much the same way Wu-Tang Clan sold Shkreli the only physical edition of their album Once Upon a Time in Shaolin. Boy did that make everyone righteously angry all over again.

In the clear light of the morning, Shkreli backtracked a bit on the ludicrously vain offer. The point is NOT to keep music from people, its to remind everyone how important and central it is in our lives, he said on Twitter. This fits with his recent Vanity Fair profile, in which the author painted a picture of a conflicted, complicated young man who may or may not be putting on an act for the sake of performance art. Never mind that hes been arrested and had to appear before Congress to answer for his odious pharmaceutical price-gouging tactics. Hes just a merry prankster out to prove a point through next-level satire.

If Martin Shkreli is actually a brilliant social commentator and performance artist, then I might be able to interest you in this pile of old diapers covered in horse entrails. You see, under that mound of crap is Tupac Shakur alive and well and eager to start recording again and a fresh, untapped oil well worth billions of dollars. Start digging!

Were all so bloody desperate for the world to not be a roiling cauldron of bile and hatred that we pretend as though anyone making asinine statements in public is some kind of clever artist. Kanye West can barf up a heinous non sequitur about Bill Cosbys innocence and a percentage of the population will shrug it off while reminding us that he wrote Flashing Lights and deserves our adoration. Perhaps Donald Trump, for all of his maniacal hyperbole, is actually running for president at the behest of the Clinton family as a spoiler to ensure Hillary wins the general election. After all, how can someone truly be so vile and mean it?

It pains me to be the one to reveal this to all of you good, honest, hard-working folk out there, but some people are just awful. And the more attention we proffer these twits, the more they act out for our dubious benefit. . Donald Trump doesnt give a damn about America. Hes just bored and needs a challenge. Martin Shkreli is lonely. Kanye West knows that manipulation of the media helps him sell more albums and more overpriced shoes.

Complain all you like about Shkreli today, tomorrow, next week, and for the rest of your life. He already has what he wants, which is a bunch of aggrieved citizens whining about him so he can drown out the deafening silence. Trump and Kanye, too: they dont care how you feel as long as you feel something. This is not a revolutionary idea. Its existed long before I was born, but the human race has a short memory, probably because all the smart people end up dying eventually, leaving us drooling children to make the same mistakes over again.

Thats why we need to elect a 100-year-old woman to be permanent president of the planet. Women are better, more just leaders than men. First, notice that the three people Im chastising in this piece are all male. Second, at 100, shell be too old to derive much pleasure in power anyway. She probably wont be able to get out of bed because her bones ache too much and shed have to unplug herself from her feeding tube, so the perverse thrills enjoyed by dictators such as Saddam Hussein and Idi Amin will be lost on her. Lastly, at 100 shell be old enough to remember all the dumb things humanity has been responsible for in the past century. If we can keep her on life support for a few years, we might be able to rid ourselves of the scourge of pedantic, blustery celebrities wasting all our time bloviating about absolutely nothing of consequence. And maybe get single-payer healthcare while were at it.

Unfortunately, in this elderly-run utopia theres no room for me. Without Martin Shkreli, Donald Trump, Kanye West, whomever is complaining about Beyoncés Super Bowl halftime show, Bill OReilly, Justin Bieber, and whatever ill-mannered sports pundit you hate most, culture writers would have nothing to write about. Late night talkshow hosts would have no monologues. Doctors, barbers and cab drivers would no longer have an easy conversation starter, like: So, did you see what Trump said at the debate last night? He called Ted Cruz a penis-face and Hillary Clinton some dumb broad who dresses like a Starfleet admiral. What a jerk. In short, our world would be 100% better, but Id have to get a real job.

People like me are part of the problem, whether we are comfortable admitting it or not. My job is to write about idiots, imbeciles, neer-do-wells and prats. If they all pissed off back to their home planet, Id have to learn accounting or masonry, which would be awful considering how clumsy I am and the fact that I sometimes still do simple addition with my fingers. But I exist, and Martin Shkreli exists, because of all of you. You keep clicking on this bollocks because you love having someone to loathe. Once you get this out of your system, hopefully youll read one of the many pieces on the ceasefire in Syria, the water crisis in Flint, or the Los Angeles gas leak.

Maybe we do this to ourselves because were lonely, just as isolated and desperate for affection and belonging as Martin Shkreli. Our lives consist of transferring from one cold, sterile pod to another from our bed to our car to our office to our bathroom to a bar to our grave. OK, maybe Im speaking for myself there, but these moments of outrage afford us all a moment of community. We unite against a common enemy, which can be incredibly, if fleetingly cathartic. Scapegoating feels great for a minute before it turns sour. Ask the citizens of Germany in the late 1930s.

Donald Trump unites his followers against Mexicans, Muslims and anyone who opposes him. You can be a part of a mission when you support Donald Trump or if you prefer, you can be a part of the mission to stop him. Either way, the guy is great at bringing people together for a common goal. Even better, Martin Shkreli unites us all against Martin Shkreli. That means everyone can hate him in unison. Unlike Trump or Kanye, hes not polarizing hes universally reviled. We can like, we can share, and we can join hands in agreement that Martin Shkreli is despicable. I know I am never alone as long as someone else hates him as much as I do. Except that the anger we foment through these glory-seekers and narcissists isnt healthy in the long term. Media outrage is a bump of cocaine: it feels spectacular for 20 minutes, and then afterward you wont shut up about how you need more.

Or, more accurately, the modern media is like bobbing for apples in a horse trough filled with cat urine. You might find something good if you try hard enough, but in the process youre probably going to make yourself sick. In this ridiculous analogy, youre better off skipping the trough completely and growing your own apples in an orchard somewhere, preferably someplace quiet, where Martin Shkreli can never find you.