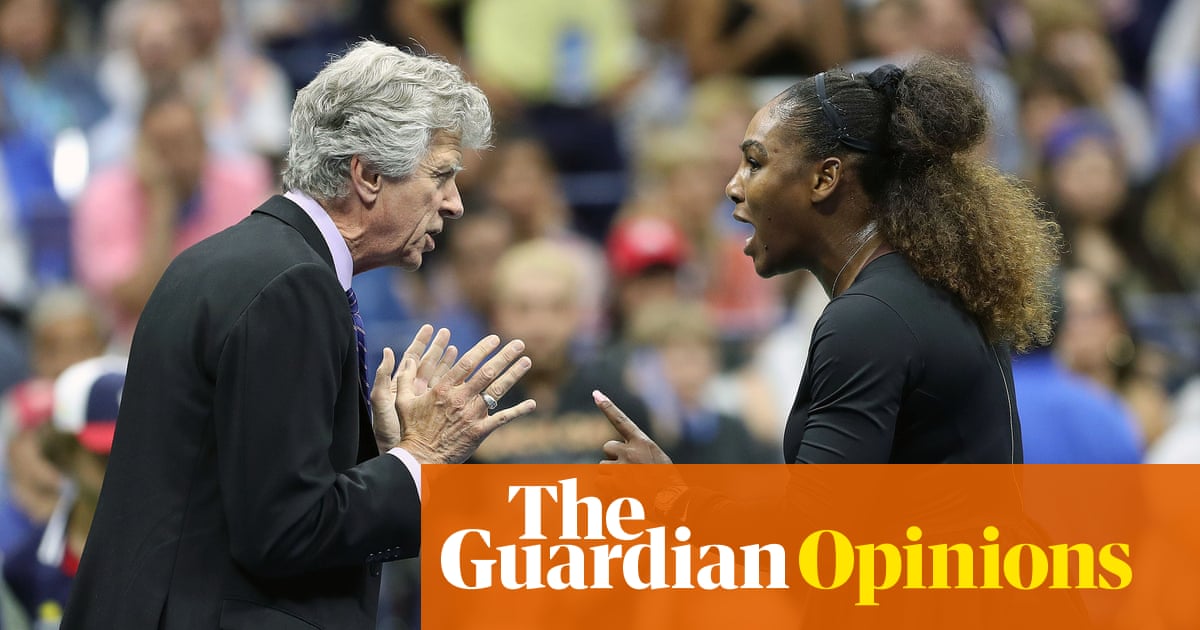 When Serena Williams threw away the US Open title she has won six times by calling the umpire “a liar” and “a thief”, she cited sexism as the root cause. No male player, she said, would be treated the way the umpire Carlos Ramos treated her.

Sadly, she did her cause no good at all. Williams, while understandably upset, was wrong. Ramos, doing no more than his job demanded, was right. Intentionally or not, she accused him of bias that simply was not there – in these circumstances, at least.

By conflating her own dilemma with a wider issue and claiming to champion the cause of women in sport, she not only detracted from the extraordinary achievement of the 20-year-old winner, Naomi Osaka, who was appearing in her first grand slam final, but she shifted the blame for her own misdemeanours, and their consequences, on to an official who was powerless to reply.

She was correct to suggest men verbally abuse umpires all the time and get away with it. So do some women. She has history herself – at this tournament in 2009, for instance. It has been a problem in the game since the days of John McEnroe. There are fines and suspensions for the worst offenders, but there is a culture in tennis similar to that in football, allowing highly paid athletes to get away with behaviour that would either start a fight or result in arrest were it to occur in the street.

But none of that excuses what Williams did in the Arthur Ashe Stadium on Saturday night – which was to manipulate sentiment to her advantage, regardless of the effect it would have on a wholly innocent opponent who showed admirable discipline and understanding on the biggest night of her life. Osaka adores Williams, and the American abused that love.

To simplify a sporting controversy that has been elevated to another level: over the final half hour of an emotional and otherwise excellent match, Williams received three code violations that resulted in her forfeiting a game and virtually handing the title to Osaka.

Ramos cited Williams for receiving signals from her coach in the stands, Patrick Mouratoglou (which he later admitted to making); for smashing her racket, a common enough occurrence in tennis, which nevertheless cost her a point as it came on the back of the first violation; and, finally, for calling him a thief, which constitutes verbal abuse.

Three strikes and she gave up an entire game. That is equivalent to letting Osaka ace her four times in a row.

This is the unadulterated evidence, there for all to see. What Williams subsequently sought to do, however, was excuse her behaviour by saying a man would not have been penalised for what she did.

“I’ve seen other men call other umpires several things,” she said to a media audience largely sympathetic to her case – and who, against convention, applauded her as she left. “I’m here fighting for women’s rights and for women’s equality and for all kinds of stuff. For me to say ‘thief’, and for him to take a game, it made me feel like it was a sexist remark. He’s never taken a game from a man because they said ‘thief’. For me, it blows my mind. But I’m going to continue to fight for women.”

Was she right on this point? Not in her specific accusation – and, whatever she really thinks, there are countless examples of men being penalised for similar behaviour – but she has a case when she suggests that the game is not always sympathetic to women.

Recently, the French tennis federation president said Williams would not be allowed in future to wear the black catsuit she wore at Roland Garros this year – ignoring the fact that her outfit was designed, in part, to control muscle movement that resulted from her emergency C-section delivery of her first child, at 36, last September.

Earlier at the US Open, an umpire wrongly admonished Alizé Cornet for changing her shirt on court during a match, which men do all the time. That was plainly boneheaded.

Then Nick Kyrgios, everyone’s favourite villain, received unprecedented understanding from the umpire, who came down to his chair during a changeover and urged him not to throw the match away by “tanking”.

In the immediate turmoil that followed Saturday’s implosion, Williams received support across the board from prominent women players, including the former grand slam champion Victoria Azarenka, who tweeted: “If it was a men’s match, this wouldn’t happen like this. It just wouldn’t.”

Most significantly, she had a friend in Billie Jean King – after whom the venue is named in honour of her 12 slam titles and her pioneering work in founding the women’s tour, along with her campaign for equal prize money.

“Several things went very wrong during the match,” King said. “Coaching on every point should be allowed in tennis. It isn’t and, as a result, a player was penalised for the actions of her coach. This should not happen.”

She added: “When a woman is emotional, she’s ‘hysterical’ and she’s penalised for it. When a man does the same, he’s ‘outspoken’ and there are no repercussions. Thank you [Serena] for calling out this double standard. More voices are needed to do the same.”

There can be no doubt that Williams is a towering presence, in her sport and beyond. She has endured racism all her life. She has suffered physically, and had a serious problems with blood clotting when she gave birth to Olympia, the centre of her life.

But her diva tendencies do her no favours. And it’s not good enough to say that such a view is sexist; there are plenty of male players who are similarly unaware of anything outside their own bubble.

They are all guilty.