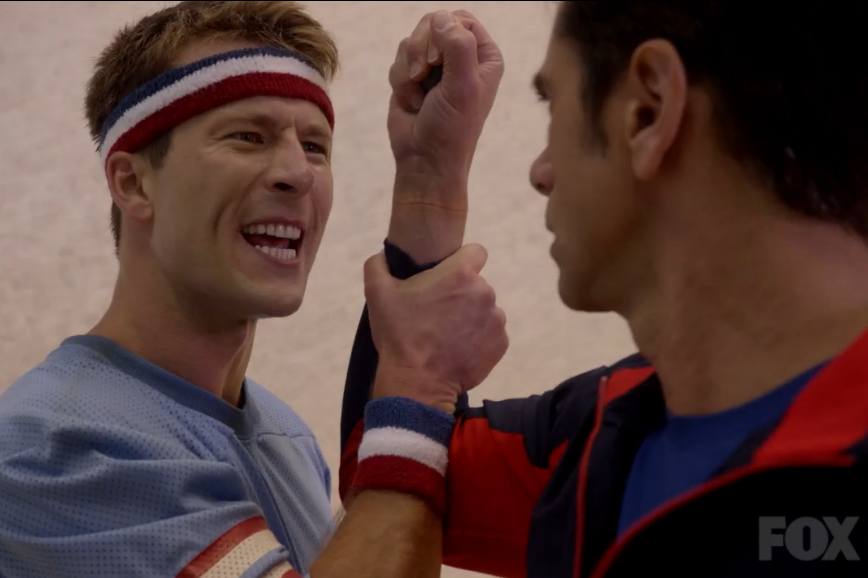 Fear not, my friends. Although this episode is full of death, destruction, and patients covered in nauseating tumors, there is a light at the end of the tunnel. Chad Radwell is back, and all is right at C.U.R.E., except for the rampant murder, that is.

The episode opens with an investigation into last weeks murder of the werewolf patient. The police, who are just one notch less inept than last season, suspect #5 of being the killer. If only, it might make her character slightly more interesting. Chanel and #3 arrive on the scene to support the police, only because they believe that #5 would be petty enough to kill someone just to sabotage their dates. Not outside the realm of possibility.

Its clear that each new episode will bring us a patient with a disease that is not only incurable, but really uncomfortable to look at. This week we are given Tyler, a guy whose entire body is covered in tiny tumors. He begs the most inadequate hospital staff of all time for help, and instead they insult him and offer up treatments that are completely unreasonable. Only a special, expensive laser can save Tyler, which the hospital is not in possession of. So, with that single effort, the doctors tasked with curing incurable patients completely stop trying to look for answers.

After the consultation, Zayday goes to see Chamberlain, the creepy candy striper. She is, just now, starting to become suspicious of Dean Munsch and this entire scam of a hospital. Apparently being the smart one still doesnt mean much on this show. Zaydays theory is that Dean Munsch created the hospital so that she could get revenge on the Chanels. She enlists Chamberlain to help her get to the bottom of things, so I predict that hell be dead within the next three episodes.

Chanel and John Stamos reschedule their date, and despite the creepy age difference I am actually super into this couple. Things start to go downhill when Dr. Brocks haunted hand goes crazy and starts groping things willy-nilly. Chanel, a fan of all things crazy, declares herself totally over Chad Radwell. Well fucking see.

Back at the hospital, Chanel #5 is complaining to tumor man about her pathetic love life and toothy vagina. Tyler is just psyched that a woman is even speaking to him and decides to open up about his own depressing life. It turns out that pre-disorder Tyler was super hot, so Chanel #5 decides to get the money for his expensive laser treatment in the hopes that hell date her once hes cured.

Chanel gets stuck working the night shift by herself and comes face to face with the Red Devil. A hallucination perhaps? No, just the light of my life: Chad Radwell. Hes brought his friend Randall in for medical attention, but most importantly hes here to win Chanel back. While out on a hunting trip with an elite society that dates back to the Hapsburgs, Randall shot Liz Cheney in the face and now suffers from the Jumping Frenchman of Maine disease. Honestly, what the fuck is wrong with Ryan Murphy.

This diagnosis is completely secondary to the pissing contest going down between John Stamos and Chad Radwell. Threatened by Dr. Brocks relationship with Chanel and magical hair, Chad resorts to bragging about his new band, Gold Plated Nutsack. Please God, bless us with a performance soon.

Meanwhile, Chanel #5 tries to create an ASPCA-style video to raise money for Tylers treatment. Like true friends, the other Chanels let her know that her video is shitty but then offer up some truly valuable advice: stand by Tyler while hes ugly and then hell feel obligated to stay with her when hes cured and hot again. Take notes, ladies.

Zayday realizes during her research that any information on the hospital from the 1980s (aka the murder era) have been scrubbed from the internet. Pretty sure the internet is forever, but okay. Chamberlain tells her that he went to the library to grab the microfiche files and then had the projector set up for her in the abandoned basement. Not suspect at all.

What they learn: the entire hospital staff was murdered on Halloween night after that doctor killed his patient because he wanted to do quaaludes instead of save people. The swamp slime coating the crime scene from the first episode was tracked around all the dead doctors and nurses, and no one was ever arrested for the crime.

On their way out Zayday and Chamberlain run into Dr. Hoffle, who is casually popping pills in the basement and asking for detailed information about the Chanels’ whereabouts at all times. Zayday, whose alliance to the Chanels is fickle at best, refuses to provide any intel. Ah, sisterhood.

The next day we are graced with a shower scene featuring both Chad and Dr. Brock. Why is Chad showering at the hospital? Because he requires three showers a day for ultimate freshness in case the occasion for emergency sex arises. Obviously. Through a series of fantastic events that lead to Chad and Dr. Brock naked in the same shower, a competition is set in the ancient Radwell tradition: squash at the YMCA, winner takes Chanel. In true fashion, John Stamos is self-aware enough to recognize that its offensive and sexist to treat a woman as a trophy, and then agrees to the terms anyways.

In a diner nearby, #5 and Tumor Tyler are sharing a heartfelt meal in which Tyler promises to use his Encyclopedia Brown Fan Fiction prowess to help #5 solve the murder she was blamed for. In turn #5 tells Tyler she likes his personality, which prompts a lot of mockery from two hot guys nearby. Like the truly unhinged person she is, #5 shatters a plate over both their heads in defense of Tyler/her toothy vagina. Tyler is either touched or terrified, its hard to tell with his fucked-up face.

Zayday confronts Munsch about the Halloween murders and accuses her of bringing together the last of the Kappas in to tie up all her loose ends. Munsch ignores her completely and tells a completely unrelated story, also known as the Donald Trump approach to life.

Munsch reveals that she started her hospital to save someone: herself. After listing some bogus symptoms shes been suffering from, Munsch starts blubbering on Zaydays shoulder about not having much time left. This is so obviously bullshit, but both Zayday and Chamberlain believe her. An eavesdropping Dr. Hoffle, however, clearly doesnt.

Moments later, Munsch is attacked in the hallway by the swamp monster, but proves herself once again as the ultimate badass by beating him off with a file folder. Shes about to pull his mask off when Chanel #3 and Taylor Lautner arrive after being noticeably absent the entire episode. While shes describing the situation and making not-so-subtle jabs at the police, the monster manages to sneak away. Some tropes never die.

Dr. Cassidy and Dr. Holt have come up with a treatment for Randall: a room full of lava lamps and a bucket to wear over his head. This is a level of care and expertise about on par with most campus med centers. John Stamos haunted hand starts scribbling notes on a prescription pad during this show and tell, something that doesnt go unnoticed by Chad.

Spooked by her encounter with the swamp monster, Munsch calls in Special Agent Denise Hemphill to tackle the case. Praise the Lord. Denise resorts to her tried and true strategy: blaming Zayday. I, for one, am completely on board with this approach. Not necessarily because I believe it, but because Zayday is so damn annoying.

Shit is going down at the YMCA for the official Chad-Stamos Squash Off. While Chad may not understand the finer points of teaching hospitals, he does know how to rock a man crop. God bless. He gets his ass kicked by Dr. Brock and his haunted hand, which appears to be pretty good at squash. Chad, the least perceptive person on this show, has already caught onto the fact that something is suspicious about the hand and likely its previous owner. Hes also planning on becoming a doctor and Im hoping with every fiber of my being that there is a crossover in our future. Maybe once they hit season 56 Shonda will stop giving a shit and go for it.