When Chris Leslie revisited Sarajevo to document the 20th anniversary of the peace accord, he accidentally uncovered the story of two relationships that crossed bitter national divides in this war-scarred city 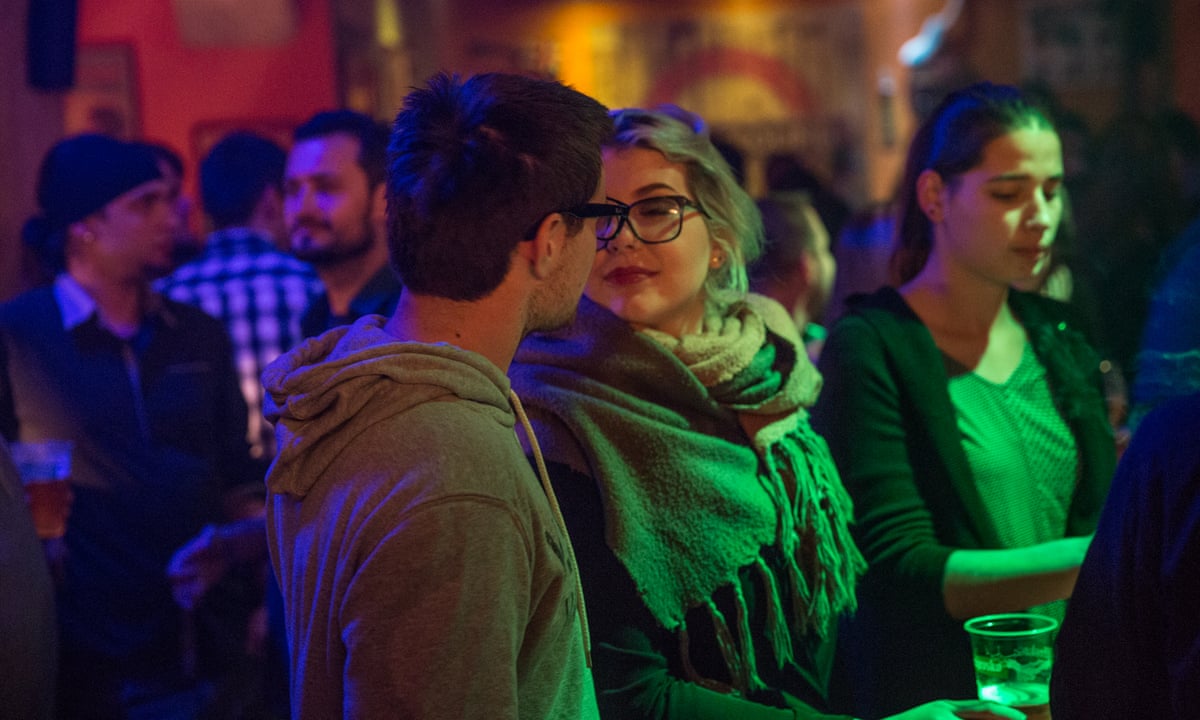 It was a typical Saturday evening in downtown Sarajevo: in the Underground nightclub, a local heavy-metal band was about to hit the stage. I was in Bosnia documenting 20 years of peace, trying to cover stories of the younger generation the so-called war babies who had been born during or just after the Bosnian war, and were now coming of age.

It was my fourth day in the city, and I had expected this day in particular to be a bit special: exactly two decades ago, the Dayton Peace agreement had been signed. It signalled the end of nearly four years of brutal war between Serbs, Croats and Bosniaks (Bosnian Muslims), and the end of the siege of Sarajevo the longest siege in modern-day history.

But aside from a pompous ceremonial event at the heavily guarded and fortified American embassy earlier in the day (which wasnt exactly a public event), there were no other events in the city to commemorate the anniversary. Twenty years to the day, and it seemed there was nothing for me to photograph.

There was certainly no anniversary event at the nightclub that evening. The young people drank, smoked and partied on regardless perhaps unaware of the 20-year anniversary, or just too busy with Saturday night to care.

I took a few photographs of the crowd and the band (who werent going to be signed any time soon), but there was scarcely enough light to capture any photos. I scanned the crowd looking for some ambient light and interesting faces. The one image I saw was of a woman and her boyfriend, about to kiss. I wasnt really comfortable with the idea of being a paparazzo, or secretly invading someones intimate moment. But I took the shot anyway and then left with a sore head from the heavy metal and cheap beer, but happy Id got at least one usable photo from the night.

Two weeks later, Guardian Cities published the image as part of a photoessay of my project. Soon after, I got a surprise email from the woman in the picture: Lejna elebii, a 20-year-old radiology student who was born the very same week the Bosnian war ended in 1995. She began the email saying:

I noticed that you took a photo of me and my boyfriend! I have had people from all over contacting me saying I am on the Guardian website. It was amazing to me that you took that photograph of us because it fits perfectly with this article as my boyfriend is Serb and I am Bosnian.

In a country where memories of the war are still raw and painful, Lejna and her 19-year-old boyfriend, Damir Marilovi, are something of a rarity. Nationalism is still very much the norm here: tensions and divisions remain, and to cling on to power, most politicians and their media allies promote increasingly nationalist agendas.

Separate education systems work to replicate the divisions, and each side enforces its own historical perspectives and political ideologies. There seems to be almost no scope for integration. Young people such as Lejna and Damir are the rare exception, challenging the consensus that even two decades after the war, the nationality of your boyfriend or girlfriend is important.

It is only when Lejna tells me the story of her parents marriage that I realise her leap across the political and ethnic divide actually runs in the family.

Her mother, Ivona, is a Catholic Croat and her father, Elvir, a Bosnian Muslim. They met and fell in love on Valentines Day 1994 in a small village outside Sarajevo. Ivona and her family were living there as refugees after fleeing Sarajevo, while Elvir ended up being stationed there as a soldier.

It was a time of intense combat between both sides, and their relationship was frowned upon by everyone. Within a few weeks they decided to move back to Sarajevo, breaking into the city through a secret tunnel that ran under the airport to avoid the frontline checkpoints.

Sarajevo in 1994 was not the ideal location for two star-crossed lovers to begin their new life together. The war was still raging: Sarajevo was completely surrounded by Bosnian Serbs, and was being systematically and indiscriminately destroyed with shelling and sniping daily. Yet Ivona chose to follow Elvir to the city they called home.

While most people were desperate to leave Sarajevo, I was heading straight towards it, Ivona recalls. I didnt think of the dangers, I just knew Elvir was my soulmate, my other half. When I came out of that tunnel at the other end, Sarajevo was laid out in front of me devastated, desperately sad, but mine.

Elvir was born and bred in Sarajevo and, like all Sarajevans, fiercely proud and protective of his home. Despite the siege, he has fond memories of the survival spirit of the city at that time.

Despite the horror in which they lived, the people of Sarajevo were laughing and more alive than they are today. People loved and shared with others even if they did not have much. They clung on to what culture was left or available: some of the best local rock music was created in Sarajevo during the period rock under siege, we called it. I saw Waiting for Godot directed by the late Susan Sontag, who visited Sarajevo. These marked some of the happy moments of that unfortunate time, and kept our city alive in some way.

The pair were married in Sarajevo in August 1994, and in March 1995 Ivona became pregnant with Lejna. During her pregnancy, Elvir ended up in hospital after being injured on the frontline by a grenade that almost caused him to lose his leg. Ivona carried on as best she could, walking six miles daily avoiding shelling and snipers to go to work and visit Elvir in hospital.

Living under siege, there was little in the way of luxury or money. In the last few weeks of her pregnancy Ivonas neighbours would rip up the floorboards from their homes for firewood so she didnt get too cold. Lejna was born on 14 November 1995 and, one week later, the Dayton Peace agreement was created.

We had survived nine months of the war as one in my body, Ivona recalls, surviving a hail of bullets and grenades on many occasions. We had lived like this day by day, not imagining life could be any different once Lejna was born. Then one week after she was born the guns stopped, and we started a new life under peace.

The Sarajevo of 20 years ago, the war-torn city where Elvir and Ivona set up home, is a very different place today. In the centre the physical scars of war are almost impossible to find as Sarajevo puts on a brave, cosmopolitan face for the international community. The rebuilding process has rebranded it with shopping malls, hotels and apartment blocks to make it look like any other European city. But for Elvir and Ivona, something important has been lost:

Our feeling is that the Sarajevo and its citizens have shown their strength in the war. Courage, solidarity, sacrifice, pride and defiance are the qualities that this city showed when it was the hardest and most necessary. Today we are missing that. We know that period of the war in Sarajevo has a special place in our hearts, and will be there until our last breath.

Today the countrys unemployment rate is around 43%, and political and economic corruption and mismanagement plague civic life. Lejna admits it is hard-going in Sarajevo at times, and she is unsure if she and Damir will remain there after they both graduate. But for now, the couple are happy being young and in love, reliving the lives of Lejnas parents in Sarajevo without the backdrop of war.

At the end of our conversation on Skype, Lejna thanks me again for photographing her, but tells me I got one thing badly wrong. Children born 20 years ago when the war ended are not war babies, as I had called them quite the opposite. She and others of her generation, regardless of nationality or ethnicity, should be known as the peace babies.