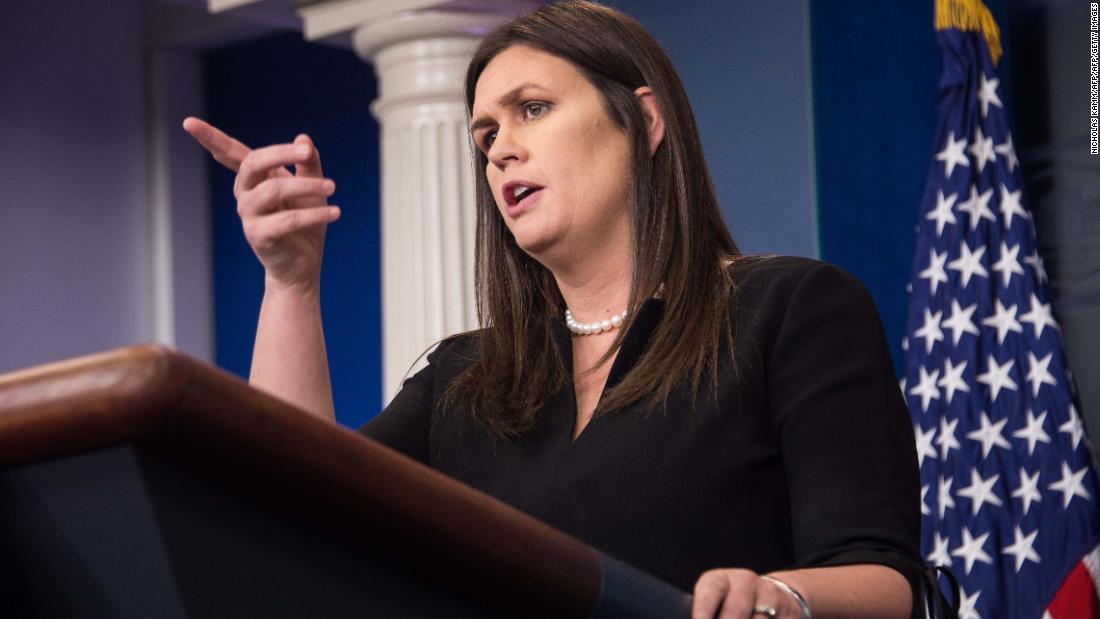 (CNN)White House press secretary Sarah Sanders doesn’t usually reveal much in her daily press briefings — at least not intentionally. But on Wednesday, she gave us a pretty clear idea of how President Donald Trump went about vetting his Veterans Affairs nominee Ronny Jackson.

That vetting of Jackson, who is currently serving as the White House physician, appeared to come down to two basic steps:
Sanders also vaguely referred to the idea that other sorts of checks on Jackson were done — “there’s a number of things” — but she didn’t elaborate. She did say, however, that in none of these background checks — named and unnamed — did anything come up about allegations of Jackson drunkenly banging on the door of a female employee on a foreign trip with then-President Obama, his “Candy Man” nickname for a penchant for handing out prescription sleeping medicine on overseas flights or that he fostered a “toxic” work environment.
Sanders’ description of how Jackson was vetted to run the second largest agency in the federal government broadly comports with what has been reported to date. Trump knew — or checked on the fact that — Jackson had been vetted by the FBI. (My guess on that is that Trump just assumed Jackson was good to go in terms of background checks because he had been working at the White House for a while.)
And we know from past history that Trump views himself as the ultimate judge of character. Trump felt like Jackson was the right guy to run the VA because he had spent time with him. He knew and liked Jackson personally. And so it made perfect sense — to Trump — to pick Jackson, much to the surprise of people inside and outside the White House, for a job that, to others, didn’t seem a natural fit.
Trump appears to have been hinging the Jackson nomination on his gut and on past FBI background checks. It’s impossible to judge the depth and breadth of what Trump’s instincts told him about Jackson. But we know in general terms what goes into an FBI background check — although it’s less clear how much more involved a check would be to work in the White House.
We can assume any past arrests or convictions are part of that check. Your financial history. Your marriage history. Is it possible that these allegations made against Jackson might not have come up in the course of the FBI background check? Absolutely.
That doesn’t mean, however, that they aren’t true. Remember that according to Montana Sen. Jon Tester, the ranking Democrat on the Senate Veterans Affairs Committee, more than 20 people who worked with or for Jackson have come forward to make allegations against him. Tester told CNN’s Anderson Cooper on Tuesday night that there were more allegations that the committee was in the process of investigating.
Tester also may have given us a clue as to why an FBI background check might have missed some of these accusations.
“We were told time and time again the people above him he treated like gold, the people below him, he belittled, screamed at them, really created a very toxic environment to the point where the people who worked around him felt like they had to walk on eggshells because of his lack of respect for his job,” Tester told Anderson.
If Jackson was managing up, it’s possible that calls to his supervisors yielded nothing but praise. A deeper dig, however, which is what the Veterans Affairs committee is in the process of doing, could well reveal issues Jackson had with his subordinates.
The point here is that for all of the White House’s bluster — after the Jackson nomination blew up, I’d add — the evidence from Sanders and other reporting around the vetting process suggests there wasn’t much of one. Trump liked Jackson. He figured a guy doesn’t become the White House physician unless he’s squeaky clean. The end.
Unfortunately for the President, the Jackson story didn’t end there. Or anywhere close.