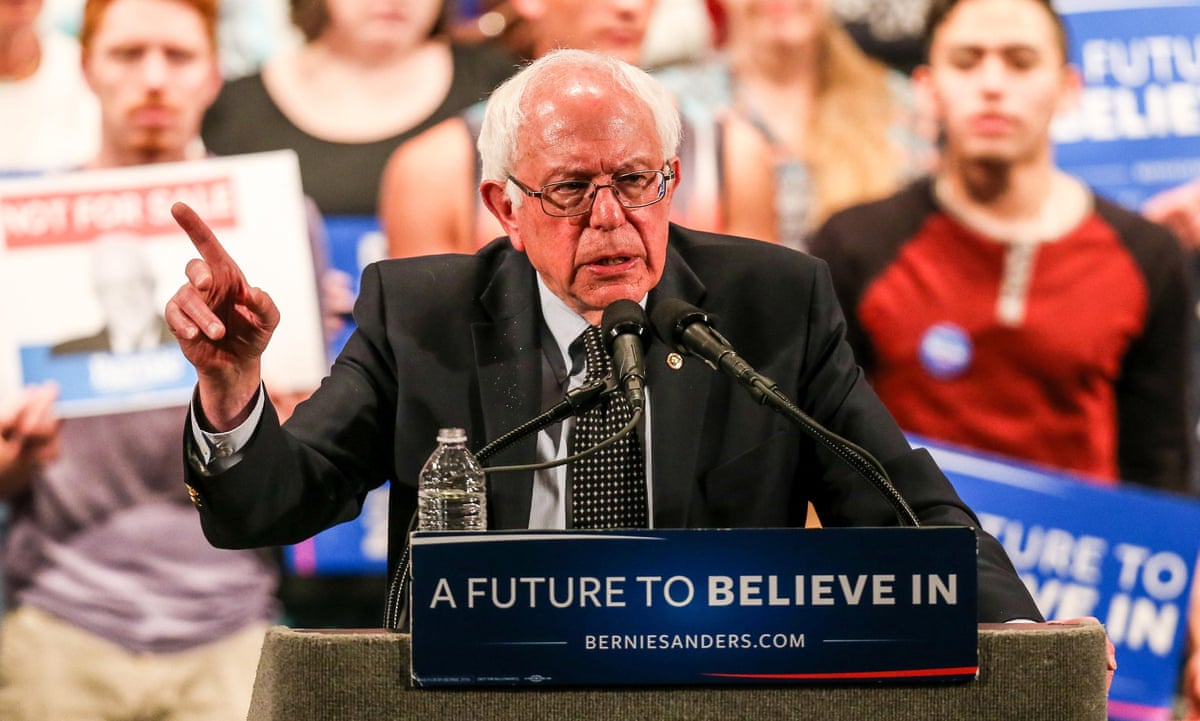 Bernie Sanders denounced Donald Trump as a pathological liar who leads a vicious movement on Saturday, and reserved some vitriol for Rahm Emanuels disastrous record as mayor of Chicago, a day after the city was rattled by violent clashes between Trump supporters and protesters.

At a press conference in Chicago on Saturday morning, the Democratic candidate for president said the Republican frontrunner had stoked racial enmity for political gain.

Let us not for one moment forget, and I think sometimes people do, that Donald Trump was at the forefront of the so-called birther movement, he continued, alluding to a conspiracy theory that Barack Obama was not born in the US. And that vicious movement was designed to delegitimize President Barack Obama.

In a statement later that day, he said: As is the case virtually every day, Donald Trump is showing the American people that he is a pathological liar. Obviously, while I appreciate that we had supporters at Trumps rally in Chicago, our campaign did not organize the protests.

What caused the protests at Trumps rally is a candidate that has promoted hatred and division against Latinos, Muslims, women, and people with disabilities.

Sanders also condemned how Trump has encouraged violence, such as the billionaires remarks in recent weeks that he wanted to punch a protester, that he would pay legal fees for supporters to knock the crap out of another, and that in the old days, protesters would be carried out in a stretcher.

What do you think that says to his supporters? Sanders asked, echoing remarks by Republican rivals who say Trumps rhetoric has gotten out of hand. Like them, the Vermont senator noted a recent string of violent incidents, including a sucker-punch by a Trump supporter against a black protester who was leaving a rally last week.

The issue now is that Donald Trump has got to be loud and clear and tell his supporters that violence at rallies is not what America is about, and to end it.

Signs in support of Sanders were visible around the protests in Chicago on Friday night, and the senator defended the protesters. What our supporters are doing is responding to a candidate who has in fact in many ways encouraged violence, he said.

Simultaneously, Trump in part blamed Sanders for the clashes in Chicago. Speaking to a crowd in Vandalia, Ohio, Trump said his supporters were so nice and caused no problem in Chicago. They were taunted, they were harrassed by these other people, he said, some represented Bernie, our communist friend.

He should say to his people stop, stop, not me, Trump went on, mocking those who say, Mr Trump should get up this morning and tell his people to be nice. My people are nice, folks.

Trump also asserted again that law enforcement advised him to cancel the event, despite the fact that Chicagos police superintendent said he had nothing to do with the decision to delay, and in fact told the campaign that security could handle the crowds.

Sanders also turned his ire toward Democrats, lambasting Chicagos embattled mayor for his record on schools and policing two issues that have sparked huge protests in the city in recent months. Let me be as clear as I can be, Sanders said, Based on his disastrous record as mayor of the city of Chicago, I do not want mayor Emanuels endorsement if I win the Democratic nomination.

The senator turned the rejection into a criticism of his rival, Democratic frontrunner Hillary Clinton, and called Emanuel one of her leading mayoral endorsers. The mayor has clashed repeatedly with the citys teachers union, and pushed for layoffs and school closings as cost-cutting measures. Police misconduct has also led to suspicion that he helped cover-up incriminating video for political reasons, and subsequent calls for his resignation.

Sanders said that if he lived in Chicago he would be active in that effort of calling for the mayor to step down. The mayor has no problem putting pressure on teachers when he wants concessions from them, he said, he is really tough taking on the children and the parents, but he aint so tough taking on the big money interests on Wall Street. Sanders frequently criticizes Clinton for her knotty history with Wall Street, including large speaking fees from the most powerful banks in the US.

Backing the senator, Emanuels rival in the last election, Jesus Chuy Garcia, who said that the mayor is running the schools like a king. Chicago Public Schools principal Troy LaReviere also spoke at the press conference, and called the mayor an open wound in the flesh of the Democratic Party.

At a stop in St Louis, Missouri, where violence also broke outside at a Trump rally on Friday, Clinton clarified an earlier statement about the Chicago clashes. Her initial statement drew intense criticism from civil rights activists for its incongruous allusion to a racially charged shooting in Charleston, South Carolina last year.

The ugly, divisive rhetoric we are hearing from Donald Trump and the encouragement of violence and aggression is wrong, and its dangerous, she told about 100 volunteers on Saturday. If you play with matches, youre going to start a fire you cant control. Thats not leadership. Thats political arson. The test of leadership and citizenship is the opposite. If you see bigotry, oppose it. If you see violence, condemn it. And if you see a bully, stand up to him.

Trump was dismissive of Clinton in his speech in Ohio, saying her supporters were not in sight in Chicago on Friday and lacked enthusiasm. Say what you will about Bernie, he said of the senators supporters, at least they have fervor.