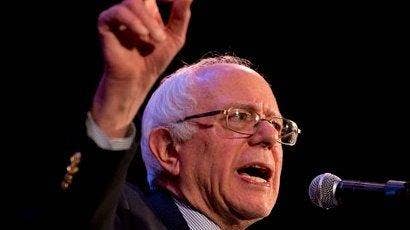 We got decimated, thats what happened, the Vermont senator told NBCs Meet the Press. No question, Secretary Clinton won that state and she won it big. I think its going to be a tough fight, (but) I think we can pull it off.

Clinton beat Sanders 73-to-26 percent, with exit polls showing nine in 10 African-Americans voting for her. The numbers strongly show that Clintons recent Nevada Caucus victory, followed by her South Carolina win Saturday, proves she has a southern firewall against the insurgent Sanders campaign.

In looking for a bright spot in the South Carolina defeat, Sanders said he did well with younger voters, whom he hopes will support him on Super Tuesday, when 11 states hold votes and roughly 880 Democratic delegates are up for grabs.

Sanders, who won the New Hampshire primary, said on CBSs Face the Nation that he thinks he can win in Colorado, Minnesota, Oklahoma and his home state of Vermont and do really well in Massachusetts.

“I think we do have a path to victory,” he said, adding that California and New York later in the primary season are also potential wins.

But if Sanders loses the African-American vote by similar margins in the upcoming Southern states, like he did in South Carolina, Clinton would likely take a delegate lead difficult for him to overcome.

Sanders said he and his campaign found his lack of support among older African-American voters in South Carolina pathetic.

Clinton suggested in her victory speech Saturday night that shes now shifting her focus to the national election, which unofficially starts after the party convention, this year in July in Philadelphia.

On Sunday, Clinton church-hopped across Memphis, Tenn., to mobilize African-American voters ahead of Tuesday’s primaries.

At two churches in the city, Clinton asked worshippers to reject “the demagoguery, the prejudice, the paranoia.

She never mentioned GOP front-runner Donald Trump’s name, but the comments appeared directed at him, and she seemed to reference his campaign slogan, “Make America Great Again.”

“American has never stopped being great, our task is to make American whole,” Clinton said at Greater Imani Cathedral of Faith.