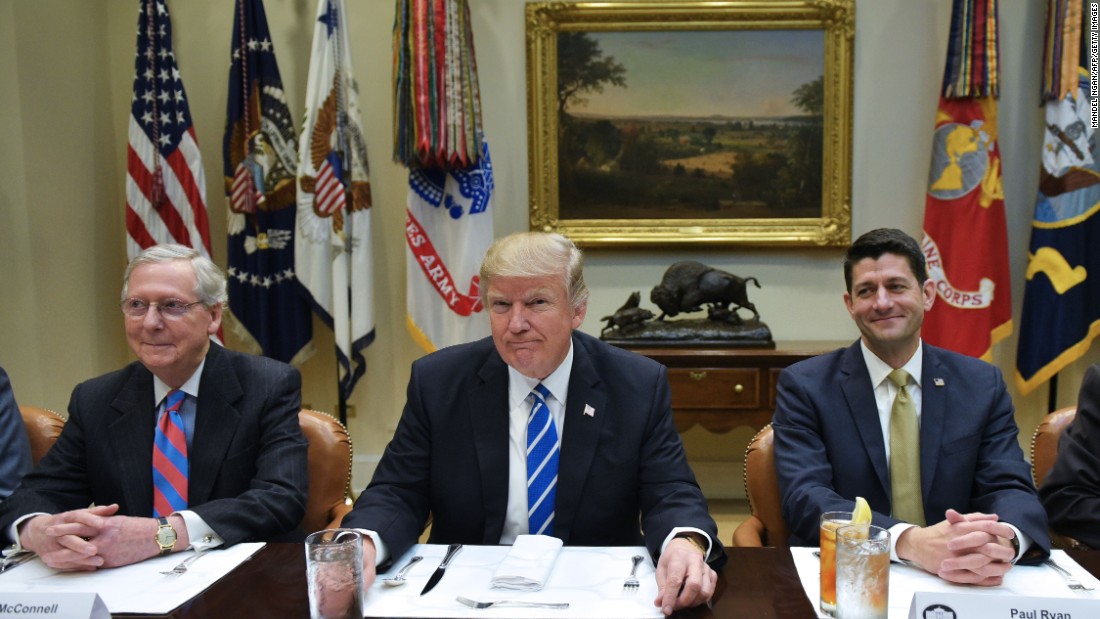 Washington (CNN)The speaker of the House, the Senate Intelligence Committee chairman and the ranking Democrat on the committee said Thursday that they’ve seen no evidence of President Donald Trump’s accusation that he was wiretapped last year by his predecessor.

“We have not seen any evidence that there was a wiretap or a (Foreign Intelligence Surveillance Act) court order against Trump Tower or somebody in Trump Tower,” Speaker Paul Ryan said in an interview Thursday on CNN’s “The Situation Room” with Wolf Blitzer.
Ryan said, however, that he still trusted Trump, and that the apparently false claims the President aired on Twitter would not damage the White House’s credibility.
“I think the President’s going to be marked and judged by his record,” Ryan said.
Senate Intelligence Committee chair Richard Burr and ranking member Mark Warner issued a statement earlier Thursday, saying “based on the information available to us, we see no indications that Trump Tower was the subject of surveillance by any element of the United States government either before or after Election Day 2016.”
The statement from the leaders of the Senate Intelligence Committee marks the clearest and strongest refutation of Trump’s allegations since the President first made them two weeks ago. The senators statement also addresses Trump’s more recent statement that he was not merely speaking about wiretapping specifically.
RELATED: Actually, Mr. President, wiretapping doesn’t cover a lot of things
The White House on Thursday said the statement did not shake their confidence in the accusation. Press secretary Sean Spicer, asked to respond to the accusation, read an extensive litany of news reports from the podium that showed intelligence agencies’ interest in Trump’s activities, but none that actually corroborated Trump’s claim.
“He stands by it,” Spicer said, characterizing the Intelligence Committee’s statement as not final. “They have yet to go through the information.”
Spicer engaged in a lengthy exchange with CNN’s Jim Acosta over whether the President stands by his allegation that he was wiretapped specifically and not under surveillance in general.
“We talked about this several days ago,” Spicer said. “The bottom line is that the investigation by the House and Senate has not been provided all the information.”
The White House later on Thursday got pushback from GCHQ, the NSA’s counterpart in the United Kingdom, over some of Spicer’s remarks. At his briefing, Spicer read a statement from Fox News’ Judge Andrew Napolitano, who had cited sources claiming Obama “used GCHQ” to provide transcripts of Trump’s conversations.
A GCHQ spokesman responded, saying: “Recent allegations made by media commentator Judge Andrew Napolitano about GCHQ being asked to conduct ‘wire tapping’ against the then President-elect are nonsense. They are utterly ridiculous and should be ignored.”
The leaders of the House Intelligence Committee have said they have yet to see any evidence of wiretapping, but have yet to flatly rule out all surveillance. House Intelligence Chairman Devin Nunes admitted that he doesn’t believe Obama ordered a physical wiretap or other surveillance activities of Trump Tower, but added, “we want to make sure that no surveillance activities were used for political purposes.”
Nunes had said Wednesday that it was possible that Trump aides were surveilled via “incidental” collection.
But when asked Thursday if lawmakers have evidence to suggest that anyone in the Trump orbit’s communications had been collected incidentally, Nunes pointed only to the leak of fired national security adviser Michael Flynn’s communications with a Russian ambassador.
“Other than Gen. Flynn, we don’t,” he said.
Ranking Democrat of the House committee Adam Schiff told CNN that he expects FBI Director James Comey to also say that he’s seen no evidence of Trump’s claim when the director testifies before his committee Monday.
“Because there’s no evidence of this at all,” Schiff told CNN. “But again you can see the President trying to say, ‘Well I didn’t mean what I said or what I said could mean various different things’ he was very specific in what he said. So we’ll ask the director to address that very specific allegation.”
Their statement came hours after Ryan said at a news conference that “no such wiretap existed,” citing intelligence reports to House leaders.
“The intelligence committees, in their continuing, widening, ongoing investigations of all things Russia, got to the bottom — at least so far with respect to our intelligence community — that no such wiretap existed,” Ryan said in response to a question from CNN.
The comments from leaders in Congress follows Trump and the White House retreating from the President’s stunning accusation in a tweet two weeks ago.
“When I say wiretapping, those words were in quotes. That really covers — because wiretapping is pretty old-fashioned stuff — but that really covers surveillance and many other things. And nobody ever talks about the fact that it was in quotes, but that’s a very important thing,” Trump told Fox News Wednesday.
RELATED: For Paul Ryan, it’s now — or maybe never