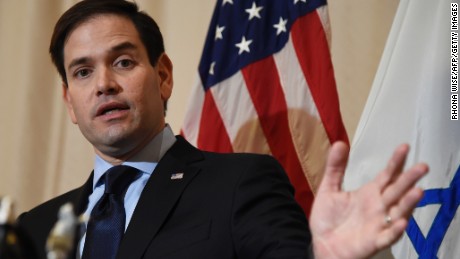 (CNN)The high-spending super PAC supporting Republican presidential candidate Marco Rubio is not putting in any money for TV ads after Tuesday’s Florida primary, a sign that the Florida senator’s closest supporters are uncertain about his future.

The Conservative Solutions PAC, which has spent $39 million this cycle lashing Rubio’s opponents and promoting the senator’s candidacy, has set its sights on saving Rubio in Florida. It has spent $9.7 million on Florida TV so far, more than double any other group. But it hasn’t reserved air time after Tuesday, according to Kantar Media/CMAG, a media tracking firm.

In previous contests, the super PAC did reserve air time in advance. Its decision to avoid launching further TV ads now is an implicit recognition that the senator’s campaign could be coming to an end if he loses to front-runner Donald Trump on Tuesday.

Jeff Sadosky, a spokesman for the group, wouldn’t discuss the group’s spending decisions.

“We’re focused on Tuesday, and we’ll have more for you afterward,” he said.

The news comes as polls continued to show a bleak outlook for Rubio come Tuesday, with two new surveys showing the senator down double digits to Trump in Florida.

Rubio has suggested that he may not be able to continue after Tuesday, saying that whoever wins the Sunshine State will ultimately become the GOP nominee. But he has not explicitly said he’d leave the race if he loses Florida, even saying Monday he planned to campaign in Utah on Wednesday no matter what.

Rubio’s campaign has not yet reserved TV air time in any states after Tuesday, either. In fact, Rubio’s campaign hasn’t spent money on TV in Florida — or any states other than small ad buys in Idaho and Hawaii — since the March 1 Super Tuesday primary, according to Kantar Media/CMAG. The campaign spent the most amount of money on TV in the first three contests — Iowa, South Carolina and New Hampshire — amount to nearly $14 million.

But a Rubio spokesman said Monday that the campaign made a strategic decision to spend money on efforts to turn out voters in primary states since the super PAC — which can accept unlimited funds — was spending big dollars on air.

Rubio’s campaign has dismissed the public polls, and the senator himself vowed to “shock” the political world by winning Florida and its 99 delegates on Tuesday. If he wins, the super PAC could certainly reserve air time in any of the upcoming contests this month.