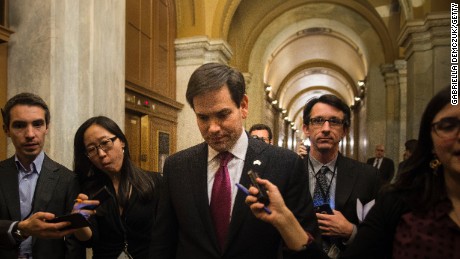 Washington (CNN)Top Republicans are becoming nervous that they may lose Marco Rubio’s Senate seat and their tenuous majority in the chamber — and now many want the Florida senator to reconsider his decision to leave office.

Behind the scenes, a number of senators, donors and leading party officials have privately prodded Rubio to make a late entry into the race to prevent his seat from flipping, several sources told CNN. Rubio is declining — but the pressure is only bound to intensify ahead of the June 24 filing deadline, with everyone from Donald Trump to freshmen lawmakers lending their voice.
On Thursday, Sen. John Cornyn, the No. 2 Senate Republican, became the first party leader to publicly call for Rubio to run for re-election.
“It’s obviously a very personal decision, but I think it would be good for the party, it would be good for the Senate — I’d like to see him do it,” Cornyn told CNN. “I hear a lot of buzz around here from members and others; that’s a conversation we need to have.”
At a closed-door lunch Thursday of GOP senators, Senate Majority Leader Mitch McConnell laid out concerns with the current state of the Florida race. He asked who in the room wanted Rubio to run for re-election and virtually everyone raised their hands, attendees said. McConnell urged his colleagues to encourage Rubio to change his mind, according to sources familiar with the session.
Rubio skipped the lunch, but he was later buttonholed on the Senate floor by Sen. Roger Wicker, chairman of the National Republican Senatorial Committee.
Wicker told CNN that the prospect of Rubio running for re-election is “certainly within the realm of possibility.”
“It is a very real development,” Wicker said.
Speaking to reporters Thursday afternoon, Rubio said it was “unlikely” that he would change his mind but did not firmly rule it out. He cited, in particular, his friendship with one candidate — Lieutenant Gov. Carlos Lopez-Cantera — but wouldn’t say what he would do if the lieutenant governor dropped out.
“I don’t do hypotheticals,” Rubio said. He added that while he listens to his colleagues, he didn’t think “anything was going to change.”
“I haven’t had time to talk to about it, but my sense of it is nothing has change,” Rubio said.
The crowded field of candidates includes Reps. David Jolly and Ron DeSantis, businessman Carlos Beruff, entrepreneur Todd Wilcox and Lopez-Cantera. But all of the candidates have their vulnerabilities, plus there are fears that they won’t be able to raise the kind of cash necessary to run a viable campaign in one of the most expensive states in the country.
“It’s the Republican nightmare nobody wants to talk about,” said Josh Holmes, a former chief of staff to Senate Majority Leader Mitch McConnell. “Everyone knew it would be next to impossible to replace Marco Rubio, but I don’t think anyone appreciated how steep that drop-off actually is in Florida.”
Republicans believe that the candidate favored by the Democratic establishment, Rep. Patrick Murphy, is flawed and can be beaten — especially as Murphy himself is locked in a bitter primary fight with progressive firebrand Alan Grayson.
But with 24 GOP Senate seats to defend, including several in swing states, some are worried that the Florida Republican candidates’ underwhelming performance so far could mean that the party would have to drain precious resources into the Sunshine State to save their endangered majority. A Rubio candidacy could presumably prevent that.
Trump — who earlier in the day clinched the delegates necessary to capture the Republican presidential nomination — urged Rubio to run in a tweet Thursday night.
“Poll data shows that @marcorubio does by far the best in holding onto his Senate seat in Florida. Important to keep the MAJORITY. Run Marco!” Trump said.
Wicker said the party committee is staying out of the primary and does not have a favored candidate in the race.

But, Wicker added, “It’s going to be an expensive seat.”
Rubio decided against running for re-election in order to make a bid for the White House, an effort that he dropped when he lost Florida to Trump in mid-March.
Rubio spokesman Alex Burgos said that the senator was not reconsidering running for re-election, pointing to Rubio’s repeated statements that he’ll be a “private citizen” in January.
In a Tuesday interview with CNN, Rubio said that his “really good friend” of 25 years — Lopez-Cantera — is likely to win his endorsement.
“I think he’s a really good candidate,” Rubio said. “The other guys I don’t know some of them that well. I don’t have anything against them, per se, but Carlos is a friend of mine for a long time, and I think potentially he is a very good candidate.”
Asked about concerns about the seat, Rubio said: “Florida is expensive. Ultimately you’re going to have to have money to win. But part of it is people haven’t started focusing in on that race yet.”

What makes the race unpredictable is the fact that the primary occurs in August — during vacation season — and that none of the candidates are particularly well known. But one candidate, Jolly — a 43-year-old congressman first elected in 2014 — has gained publicity as of late because of his push to ban lawmakers for directly soliciting campaign cash by phone.
Jolly’s effort became the subject of a recent “60 Minutes” segment on CBS, which portrayed him in a favorable light battling against an entrenched leadership, whom he accused of asking members to raise $18,000 per day in order to keep their campaign accounts flush.
The question is whether Jolly would be able to heal the wounds from his effort, which party leaders view as self-serving.
Oregon Rep. Greg Walden, chairman of the National Republican Congressional Committee, scoffed when asked about Jolly’s fundraising claims.
“He’s got to do what he’s got to do to try to get attention for his Senate run,” Walden told CNN. “Show me a member around here who spends 30 hours a week making fundraising calls? I don’t know any. He doesn’t know any. This is all about his Senate race. It’s pretty disappointing.”
Even some of Jolly’s Florida colleagues don’t seem to have a particularly high opinion of him.
Rep. Mario Diaz-Balart, who backs Lopez-Cantera, refused to say if he likes Jolly.
“I really like DeSantis, and I really like Lopez-Cantera,” Diaz-Balart said when asked what he thought about Jolly.
Jolly pushed back in an interview with CNN, saying critics were “shooting the messenger” and that he is trying to change a fundraising system on Capitol Hill that could lead to corruption. He said members and aides have told him about illegal fundraising activities that occur on the Hill.
“The other four candidates on my side of the aisle are trying to mimic Donald Trump, and then there’s me … having delivered for the Tampa Bay region,” he said of his opponents.
Jolly added: “Others are running on shutting down the government, being angry or frankly mimicking the success of Trump. And I say that mimicking Donald Trump doesn’t make you a leader, it makes you a follower.”
On Saturday, Jolly said in a statement that he would step aside if Rubio entered the race and “support Rubio for re-election.”

Beruff, a 58-year-old, first-time candidate who has been in the homebuilding business for 36 years, is often compared to Trump. His allies say he is authentic, but his critics say he’s a loose cannon who cannot be trusted in a general election.
“If being genuine is a detriment in this race, then I guess that will play itself out in the next 90 days or so,” Beruff told CNN. “I’m 58, I’m too old to change.”
Beruff, who voted for Trump in the March Florida primary, came under fire for referring to Obama as an “animal” during a campaign stop last month.
In an interview, Beruff refused to walk back his comments.
“I do,” Beruff said when asked if he stood by his remarks. “It was a moment when I was describing how he dismantled and dismembered our military … When people are doing things that are without thought and consideration, you say … ‘He’s doing things without thought or the repercussions.’ “
Asked about his opponents, Beruff said: “They are all career politicians. They have never created a job. They don’t know how the economy hurts people.”

If Rubio were to make a late entry into the race, he’d be forced to either take on — or cut a deal with — his longtime friend, Lopez-Cantera, who has the benefit of running statewide as lieutenant governor. As a Cuban-American who also has Jewish roots, Lopez-Cantera has the potential to appeal to a wide cross-section of Floridians — especially with his ties to populous Miami-Dade County.
In an interview with CNN, Lopez-Cantera argued that his name recognition as a statewide officeholder will help in a low-turnout primary — and he says two of his opponents will be saddled with the unpopularity of Washington.
“I think they both represent the system and the symptoms of what is wrong with Washington,” Lopez-Cantera said of DeSantis and Jolly. “They regularly tout measures they’ve introduced and sponsored but they have never delivered on any of them.”
Yet, Lopez-Cantera has so far not been able to build much of a major war chest. He had just $389,000 in cash-on-hand through the end of March. Jolly didn’t fare much better, with $562,000, while Beruff reported just $59,000 — though he is spending much of his own cash in the primary. Wilcox, a former CIA officer, reported $1.1 million in his account, while DeSantis had $3.2 million in cash.
But DeSantis is a staunch conservative — and some Republicans argue that he’d stand little chance in a general election where he’d have to appeal to swing and moderate voters.
Brad Herold, campaign manager for DeSantis, said that polls show his boss could beat Murphy or Grayson.
“The only candidate who’s proven he can get support among the grassroots and put together a statewide finance infrastructure is Ron DeSantis,” Herold said.
Yet some in the GOP establishment are skeptical.
“We hope he would reconsider running for re-election, which would really increase our chances to hold the seat,” said Scott Reed, a top political strategist at the U.S. Chamber of Commerce. “He is a proven vote-getter and this Senate seat could be pivotal to the majority.”
“Right now, I can envision a scenario where the balance of the Senate tips to the Democrats with the election of Alan Grayson,” said Holmes, the former senior McConnell aide. “And I’m not the least bit kidding about that.”